We’re not even a month into recreational marijuana sales in California, and already, the state has been issuing 50 marijuana licenses per day. The team at Cannabiz Media has been tracking these licenses closely, and with thousands of licenses still pending in the state’s queue, the team believes this license pace will continue well into the future. 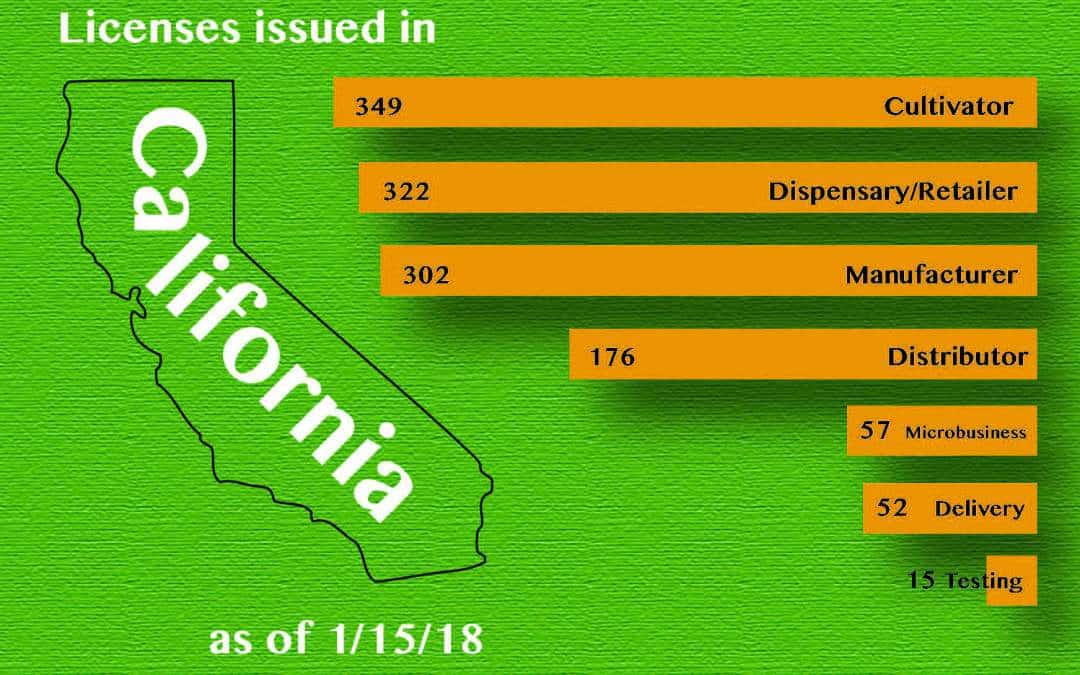 Based on research from the Cannabiz Media License Database, let’s take a closer look at some of the most interesting trends developing in California.

Most Early Cannabis Licenses are Going to Cultivators, Dispensaries, Retailers, and Manufacturers

We all know how big the California market is (it’s the sixth largest economy in the world), so it’s not surprising that a large number of marijuana licenses have already been awarded across the value chain. For a bit of background, it helps to understand how the California regulatory structure works when it comes to issuing licenses: 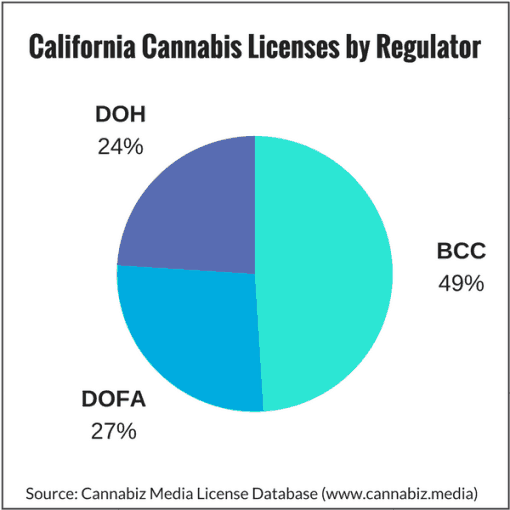 Diving a bit deeper into the data, the Cannabiz Media License Database reveals that a total of 1,273 cannabis licenses have been issued in California. The breakdown by license type follows:

You can see this data in the chart below. 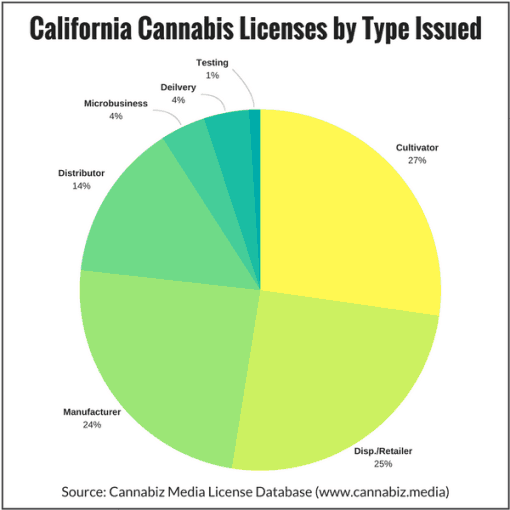 15 Companies Hold 10% of All Cannabis Licenses in California

Marijuana was legalized in California long ago, so there are companies doing business in the state that have already established brands and expert management. As a result, some of these companies are early winners of many licenses. In fact, just 15 companies hold nearly 10% of the 1,273 licenses awarded as of January 15, 2018 in California. Here’s the leader board to date:

Of particular interest are license holders who are bundling licenses to create larger sites or stacking licenses by obtaining them from different regulators. For example, CA Systematize obtained its eight licenses from all three issuing agencies, including small medical and adult cultivation licenses, adult and medical extraction licenses, and retailer and dispensary licenses. Suffice it to say, this strategy certainly required a highly effective compliance team who had to coordinate multiple licenses from the three different regulators in a very short timeframe.

Another example is Honeydew Farms, which operates in Humboldt County, California. The company pursued a two-step strategy to compete with large grow sites that had permits with other municipalities. First, it secured conditional use permits in Humboldt County. Second, it applied for and received its 29 small/medium outdoor cultivation licenses bringing it to the top of the California license leaderboard at this time.

Seven Cities Account for 40% of Issued Cannabis Licenses in California

The number of jurisdictions that have received cannabis licenses changes on a daily basis. As of January 15, 2018, cities that passed marijuana ordinances and issued local permits have reaped the early rewards. In total, 162 jurisdictions in California have received licenses, and just seven cities account for 40% of those licenses. Here is a license breakdown by city:

What’s Next for Cannabis Licenses in California?

As mentioned earlier in this article, Cannabiz Media believes this fast-paced licensing trend will continue for some time. In fact, if the trend continues. There could be more than 10,000 licensed California marijuana businesses by the end of 2018!

What remains to be seen is how market maturity will affect license distribution and the overall California cannabis license landscape in terms of the types of licenses awarded, who holds those licenses, and where the businesses holding those licenses are operating. Cannabiz Media will be tracking it all in the Cannabiz Media Licensing Database, so stay tuned for updates.