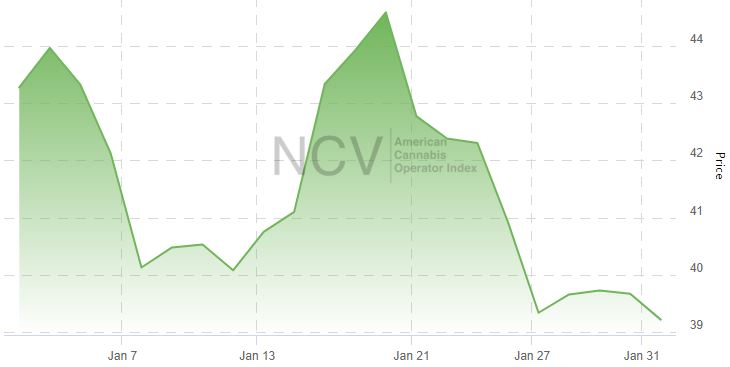 During Q4, the index had fared better than the broader market with a 14.5% decline compared to the 20.8% loss in the Global Cannabis Stock Index. The index, which launched at the end of October 2018 with a value of 100, reached a closing high of 124.16 a week later before declining to 70.64 in late December. In 2019, it rallied as high as 119.53 in early April before selling off over the balance of the year. This past month, it marginally eclipsed the December 18th closing low of 39.35: 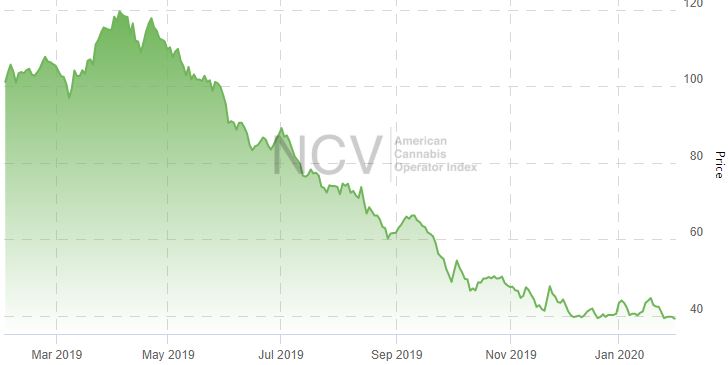 During January, the index included 19 companies, including 16 multi-state operators (MSOs) and 3 focused solely on CBD extracted from industrial hemp. Several MSOs are pursuing CBD strategies apart from their state-licensed cannabis businesses, giving the index additional exposure to that market beyond the pure-plays. Three companies managed double-digit gains, while seven posted double-digit losses, including three that lost more than 25% of their value: 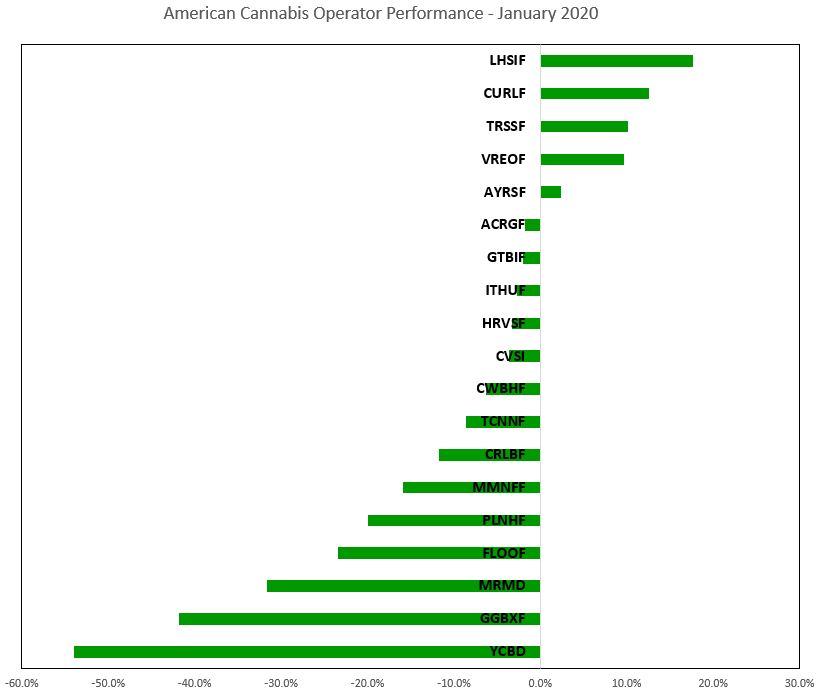 The four best performing stocks were Liberty Health Sciences (CSE: LHS) (OTC: LHSIF), Curaleaf Holdings (CSE: CURA) (OTC: CURLF), TerrAscend (CSE: TER) (OTC: TRSSF) and Vireo Health (CSE: VREO) (OTC: VREOF). Liberty Health, up 18%, rallied into its earnings release near the end of the month and held those gains, with the stock having doubled off of its lows in the summers. The fiscal Q3 report showed strong revenue growth in its Florida operations with a 15% operating profit margin. Curaleaf, up 13%, closed the acquisition of Acres in Nevada, locked down a $300 million debt facility at 13% for four years, extended lock-ups on key shareholders and shared an updated time-line on pending acquisitions. TerrAscend, up 10%, named its Executive Chairman as CEO, walked away from a Nevada acquisition inked almost a year ago, won a processing license in Utah, began cultivation in New Jersey and closed an upsized $33.5 million private placement of equity and warrants. Vireo Health, up 10%, outperformed for the second consecutive month, perhaps bolstered by the prospects of legalization in New York.

The four worst performing stocks were cbdMD (NYSE American: YCBD), Green Growth Brands (CSE: GGB) (OTC: GGBXF), MariMed (OTC: MRMD) and  Flower One (CSE: FONE) (OTC: FLOOF). Green Growth Brands and cbdMD were the two worst performers last month as well, with both leveraged to CBD. cbdMD, down 54%, was pressured by a capital raise that took place at $1.00 per share, a big discount to where it had been trading in advance. There were no significant news reports for Green Growth Brands, down 42%, which is due to report its financials later this month. Marimed, down 32%, is also heavily exposed to CBD through its large stake in GenCanna, which is facing potential bankruptcy. Marimed also has extensive commercial relations with GenCanna. Flower One, down 23%, gave up strong gains from December that followed completion of a capital raise.

For February, the number of names in the index will will increase to 20 with the return of CBD producer Elixinol Global (ASX: EXL) (OTC: ELLXF), which qualified again after a pick up in its daily trading.