The American Cannabis Operator Index fell again for the eleventh consecutive month, declining 25.5% to 29.24, its lowest monthly close since inception: 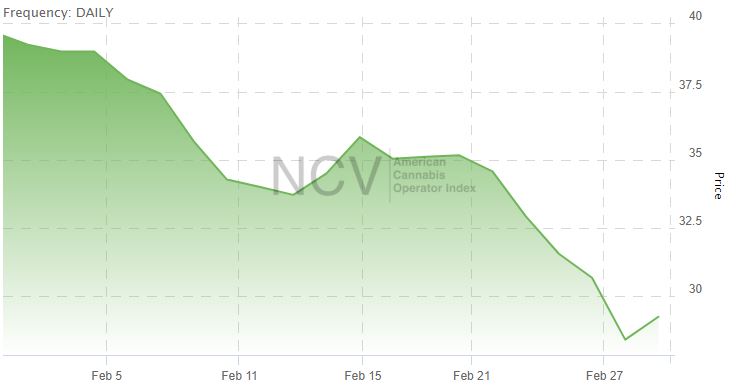 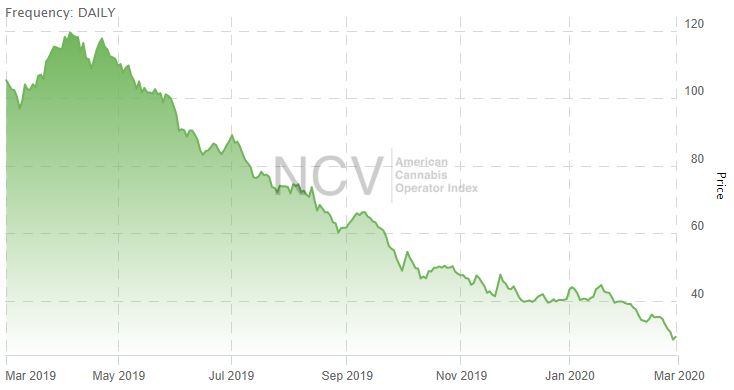 During February, the index included 20 companies, including 16 multi-state operators (MSOs) and 4 focused solely on CBD extracted from industrial hemp. Several MSOs are pursuing CBD strategies apart from their state-licensed cannabis businesses, giving the index additional exposure to that market beyond the pure-plays. Only one company managed a positive return, while sixteen posted double-digit percentage losses, including six that lost more than 40% of their value: 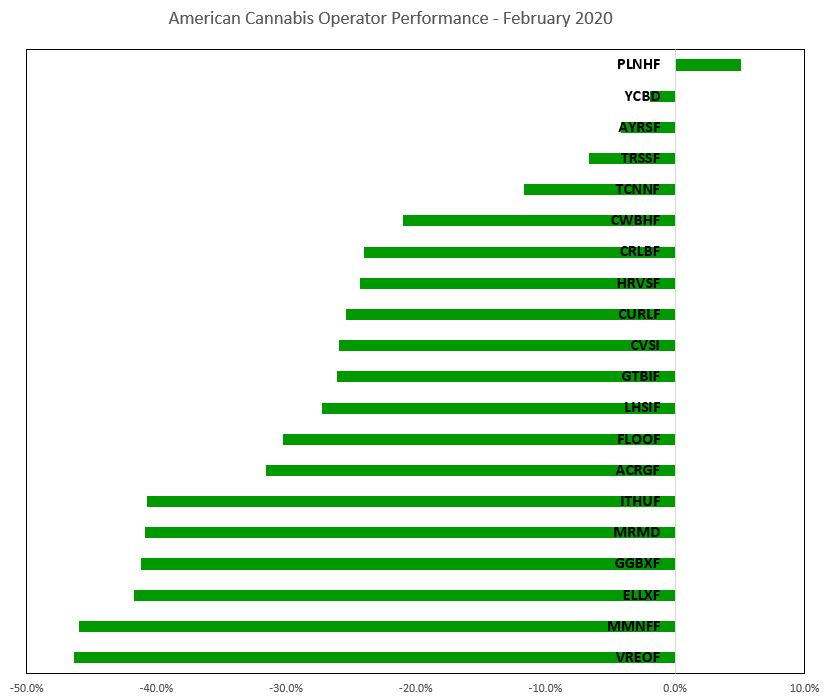 The four best performing stocks were Planet 13 Holdings (CSE: PLTH) (OTC: PLNHF), cbdMD (NYSE American: YCBD), AYR Strategies (CSE: AYR) (OTC: AYRSF) and TerrAscend (CSE: TER) (OTC: TRSSF). Planet 13, up 5%, reported record revenue for January early in the month. cbdMD lost 2% after having led the index lower in January with a 54% drop that followed a capital raise. During February, it reported that fiscal Q1 revenue grew 6% sequentially to $10.1 million. AYR Strategies, which rose 2% in January and fell 4% in February, reported that Q4 revenue declined slightly from Q3 to $32.3 million but provided a strong outlook for 2020, with the company expecting revenue to exceed $207 million and adjusted EBITDA in excess of $93 million. TerrAscend, which was up 10% in January, fell 7% during February, leaving it up 3% in 2020 thus far.

The four worst performing stocks were Vireo Health (CSE: VREO) (OTC: VREOF), MedMen (CSE: MMEN) (OTC: MMNFF), Elixinol Global (ASX: EXL) (OTC: ELLXF) and Green Growth Brands (CSE: GGB) (OTC: GGBXF). Vireo, which had outperformed the index in December and January by rallying 10%, declined 46%. MedMen continued to decline after the January departure of founder and CEO Adam Bierman, losing 46% during the month and 55% year-to-date. The company reported that fiscal Q2 revenue grew 11% sequentially as its operating losses fell only slightly and announced a plan to focus exclusively on its retail operations. Elixinol Global moved to an all-time low, declining 42% during the month after announcing plans to exit two of its three businesses to focus solely on CBD. Another company deciding to prioritize its focus was Green Growth Brands, which fell 41%. The company announced strong revenue for its fiscal Q2 but losses that remained quite high. It agreed to sell 80% of its CBD operations for an undisclosed amount to a related party as it continued to look for another buyer. The company has also embarked on a $30 million capital raise to support its cannabis operations.

For March, the number of names in the index will will decrease to 16 with the departures of AYR Strategies, Elixinol Global, Flower One (CSE: FONE) (OTC: FLOOF) and Vireo Health, which failed to meet the minimum daily trading value requirement.