The American Cannabis Operator Index fell for the twelfth consecutive month, declining 27.9% to 21.09, its lowest monthly close since inception: 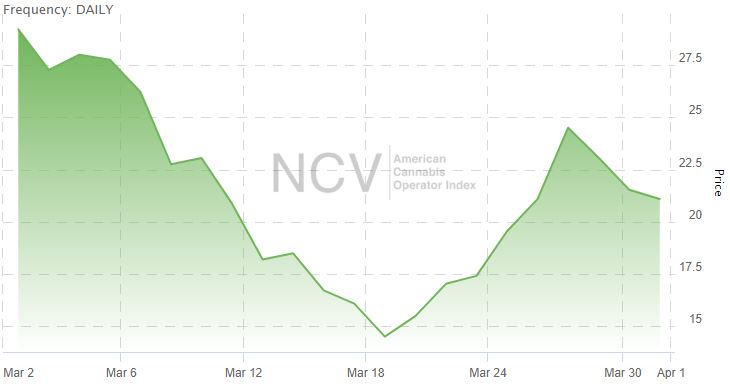 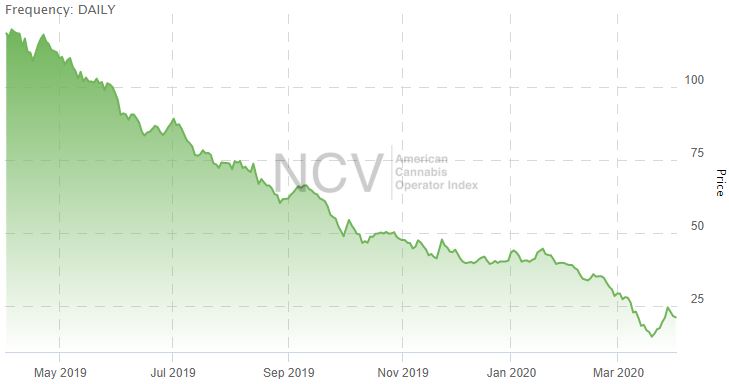 During March, the index included 16 companies, including 13 multi-state operators (MSOs) and 3 focused solely on CBD extracted from industrial hemp. Several MSOs are pursuing CBD strategies apart from their state-licensed cannabis businesses, giving the index additional exposure to that market beyond the pure-plays. No companies managed positive returns, while thirteen posted double-digit percentage losses, including three that lost more than 40% of their value: 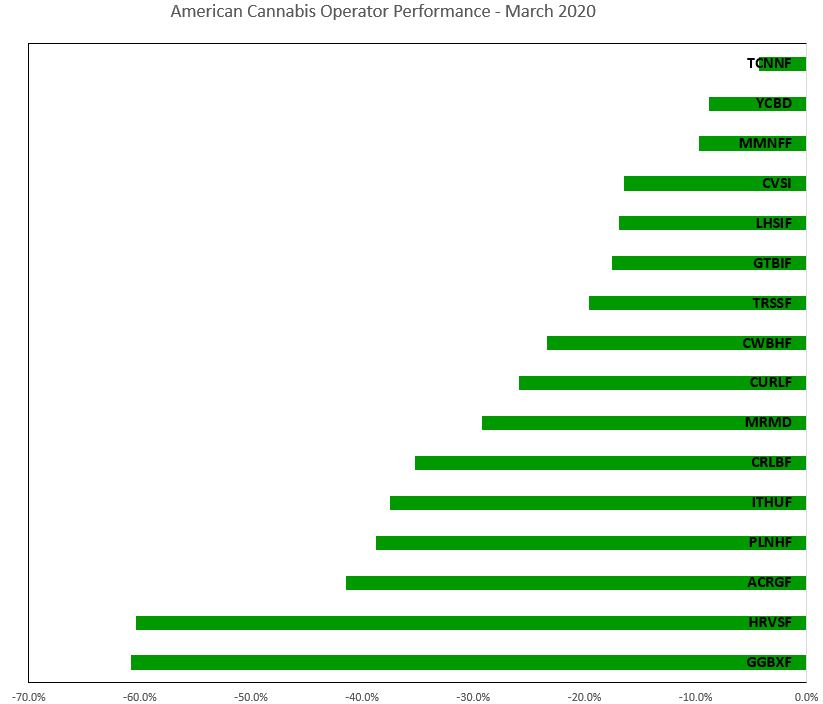 The four best performing stocks were Trulieve (CSE: TRUL) (OTC: TCNNF), cbdMD (NYSE American: YCBD), MedMen (CSE: MMEN) (OTC: MMNFF) and CV Sciences (OTC: CVSI). Trulieve, which will be reporting its Q4 financials in early April, was quiet on the news front, but investors likely gravitated to the name due to it being profitable historically. cbdMD was one of the better relative performers for the second month in a row after a being the worst performer in January, when it raised capital. MedMen was one of last month’s worst performers, when it lost 46%. CV Sciences reported a Q4 that showed revenue in decline and gave weak guidance for Q1 as well but bounced after the report.

The four worst performing stocks were Green Growth Brands (CSE: GGB) (OTC: GGBXF), Harvest Health and Recreation (CSE: HARV) (OTC: HRVSF), Acreage Holdings (CSE: ACRG) (OTC: ACRGF) and Planet 13 Holdings (CSE: PLTH) (OTC: PLNHF). Green Growth Brands announced a potential sale of its CBD business, but that looks to be wrecked by COVID-19. The company’s CEO resigned and many of its employees were terminated. Harvest fell sharply after it announced a capital raise. It also terminated its pending acquisition of Verano Holdings. Acreage Holdings reported in late February. In March, it accessed $43 million in debt. Planet 13, which currently generates all of its revenue from a single store that caters to tourists in Las Vegas, was likely impacted by the shutdown of tourism. I recently published an in depth review of the company for subscribers at 420 Investor ahead of their Q4 financials that will be released in April.

For April, the number of names in the index will will decrease to 15 with the departures of Green Growth Brands and Marimed (OTC: MRMD), both of which fell below the minimum price required for inclusion, and the return of AYR Strategies (CSE: AYR) (OTC: AYRSF).

In the next monthly review, we will summarize the performance for April and discuss any additions or deletions. Be sure to bookmark the page to stay current on American cannabis operators stock price movements within the day or from day-to-day.