After twelve consecutive monthly declines, the American Cannabis Operator Index extended its rally of off its all-time low set in March, increasing  6.3% to 22.42: 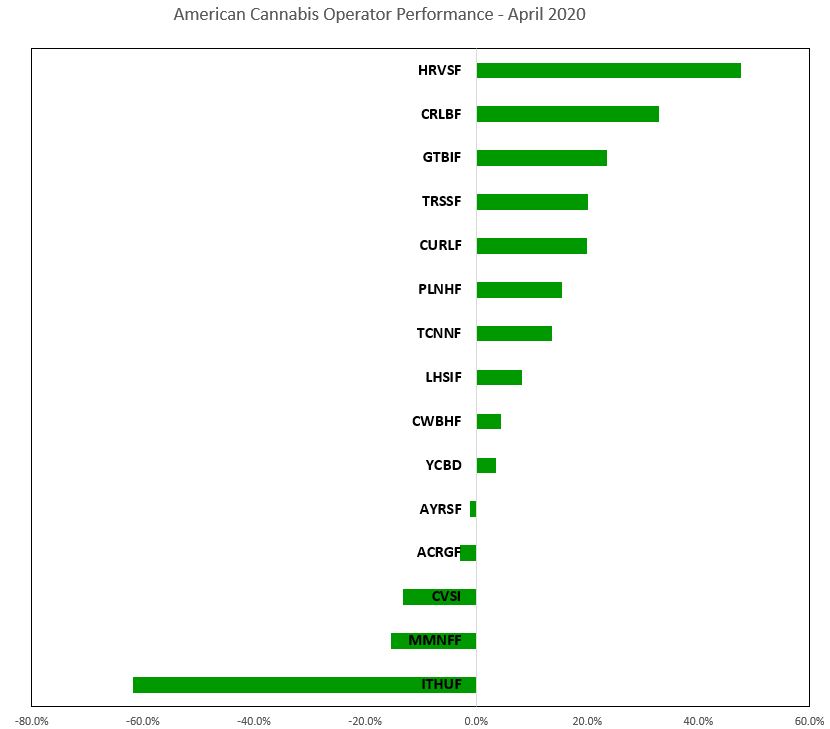 The four best performing stocks were all MSOs, including Harvest Health and Recreation (CSE: HARV) (OTC: HRVSF), Cresco Labs (CSE: CL) (OTC: CRLBF), Green Thumb Industries (CSE: GTII) (OTC: GTBIF) and TerrAscend (CSE: TER) (OTC: TRSSF). Harvest, which lost more than 60% in March when it announced a capital raise and the abandonment of the pending acquisition of Verano Holdings, recovered some of its losses. The company inked a deal to sell up to 13 California dispensaries for up to $80 million, mainly in stock, to Hightimes Holding Corp, which seems to have sparked the stock. Early in the month, the company reported its Q4 financials. Cresco Labs, which along with GTI, is one of the major operators in both Illinois and Pennsylvania, reported its financials late in the month and provided revenue guidance on its conference call for Q1 at $61 million. It also abandoned the acquisition of Tryke. GTI rallied to recover all of its February losses, posting no major news releases during the month. TerrAscend reported solid growth in its MSO operations and challenges in its Canadian LP operations during Q4 and hosted its first quarterly conference call ever with new CEO Jason Ackerman. The company also pre-announced strong revenue growth in Q1.

The four worst performing stocks included some of the better performing ones in March. Two companies backed by Gotham Green Partners posted the worst performance, including iAnthus Capital (CSE: IAN) (OTC: ITHUF), which defaulted on its debt and saw its CEO exit, and MedMen (CSE: MMEN) (OTC: MMNFF), which was a top relative performer in March. CV Sciences (OTC: CVSI), also one of the best performers in March, reported favorable news regarding a patent it had filed. It also disclosed that it received a Paycheck Protection Program loan. Acreage Holdings (CSE: ACRG) (OTC: ACRGF) was one of the worst performers for the second month in a row and has declined 62% this year. Due to the COVID-19 crisis, the company has delayed filing its audited 2019 financials. Early in the month, it announced management changes and a retrenchment across multiple markets.

For May, the number of names in the index will will decrease to 14 with the departures of iAnthus and Medmen, both of which fell below the minimum price required for inclusion, and the return of TILT Holdings (CSE: TILT) (OTC: TLTFF).