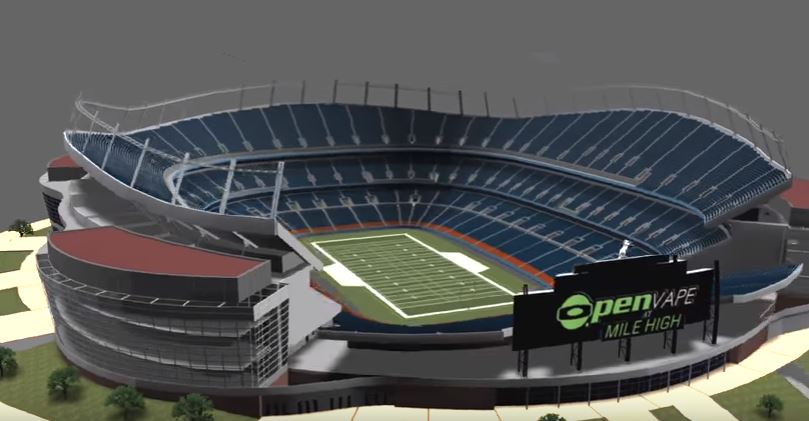 DENVER, CO–(Marketwired – May 19, 2016) – O.penVAPE recently submitted a proposal to partner with the Metropolitan Football Stadium District, home of the Denver Broncos, to sponsor Denver’s landmark stadium. Headquartered in Denver, the nation’s leading vaporizer and cannabis oil company envisions the stadium sponsorship as a platform to promote its non-psychoactive cannabidiol (CBD) wellness products.

The current assignee of the stadium’s naming rights, Sports Authority, recently announced it will be forced to sell its assets after failing to reach an agreement with creditors. The proposal from O.penVAPE states that the company has the financial means to assume the obligations of the current naming agreement, which may cost more than $6 million annually, in a deal expected to last until 2021.

Coincidentally, a bipartisan bill introduced into the Colorado legislature in April hopes to ensure the name “Mile High” will live on as part of any naming deal for the Denver Broncos’ stadium. Jeremy Heidl, Chief Operating Officer, said O.penVAPE intends to preserve that legacy by pursuing “O.penVAPE at Mile High” as the stadium’s official designation.

“We’re a rapidly growing global business, and we see the opportunity to align two iconic winning Colorado brands to reflect our state’s pioneering spirit and heritage,” Heidl said. “Our company produces much more than innovative vape pens, and we intend to drive awareness around the use of CBD products as an alternative treatment for pain and other medical conditions, an issue specifically relevant to the NFL.”

Heidl said a growing number of grassroots organizations advocate for NFL players to use cannabis, and CBD in particular, to treat pain, inflammation, seizures, hypertension, chronic traumatic encephalopathy (CTE) and other medical issues. The Denver Post recently reported that a group of retired NFL players, led by former Broncos Nate Jackson and Jake Plummer, as well as current Ravens tackle Eugene Monroe, are lobbying to relax NFL restrictions and disciplinary actions against players’ use of cannabis. The Post reported those players believe cannabis derived products offer a safer and more effective alternative to the addictive narcotic painkillers players receive while in the league.

“The NFL has the opportunity to be a leader in the sports industry to address pain management,” Johnstone said. “I believe many active and retired players would appreciate working with O.penVAPE to support scientific research, dispel the stigmas of using cannabis, and provide safer treatment alternatives to league players.”

It was the existing collaboration with Johnstone and the opportunity at hand that lead to the O.penVAPE bid for naming rights. Heidl said national cannabis legalization, and more importantly, safe access to legal cannabis is imminent.

“Pennsylvania has become the 24th state to legalize medical marijuana and Federal legalization will happen in the near future,” Heidl said. “O.penVAPE is ready and well positioned to lead research and innovation.”

O.penVAPE has committed resources to actively lead CBD innovation research and development. It has invested in a scientific team that is driving technology to measure oils in convenient, consistent and measurable doses. In addition, it recently announced its CBD Biosciences venture in Pueblo, CO. Taxpayers approved approximately $8 million in economic stimulus funding to O.penVAPE and its partners to create jobs and to refurbish a former Boeing rocket assembly plant as a hemp oil processing and CBD scientific research facility.