Financially-strapped protection provider to the cannabis industry Blue Line Protection Group (OTC:BLPG) has found an investor in Hypur Ventures, LLC, according to an SEC filing that included a press release. The investment consists of 10mm convertible preferred stock priced at $0.05 per share with the warrants for 5mm shares at $0.10 per share.  Hypur has the right to buy an additional 10mm shares of the preferred stock within the next year and the option to convert the preferred shares into common shares.

The company has 125.35mm shares as of April 30th, so the preferred shares, if converted, would represent 7.4% of the Blue Line Protection Group, with the potential to own as much as 30mm shares or 19.5% of the company with an additional $750K investment. The company didn’t disclose any information about Hypur Ventures, but it is likely related to Arizona-based banking technology company, Hypur. Its CEO, Chris Galvin, previously had disclosed ownership of Blue Line Protection Group, through CGDK LLC, of 7.117mm shares, then 5.76% of the common shares but now 5.68%, in July 2015.

Blue Line Protection Group recently restated its 2014 audited financial statements and released its 2015 10-K, which pointed to dire financial circumstances. The company’s cash position as of 12/31/15 had dwindled to just $16,211, with current assets of $162K dwarfed by the $1.584mm in current liabilities. The company has $415K in convertible notes due in July to an undisclosed officer or director that could add 16.6mm shares at the $.025 conversion price. Total liabilities at year-end exceeded assets by $134,177 compared to positive stockholders’ equity of $384,106 at the end of 2014.

Following year-end, the company’s deteriorating financial position has been demonstrated by several borrowings, including a $58K convertible note issued in January and due November 1st with a 8% interest rate that jumps to 22% if the loan isn’t paid in full.  After July 26th, the lender can convert the loan at a 42% discount to the trading price.  Prior to that date, the company can prepay the note at a significant premium to its face value. On April 1st, Blue Line Protection Group borrowed $144K for one year at an interest rate of 24.25%.  It also borrowed $40K from its CEO, Daniel Allen, who until recently was also serving as CEO of another penny stock, Sibannac (OTC:SNNC).

Blue Line Protection Group grew revenue in 2015, but its operations consumed $682K compared to $443K in 2014. For the full year, sales increased by 154% to $2.6mm.  In Q4, however, the sales declined to $545K from $773K in the prior quarter though rising from $475K in the year-ago Q4. The operating loss for 2015 was $1.18mm. The company’s deterioration financially prompted rival Iron Protection Group, a subsidiary of General Cannabis (OTC:CANN), to take a shot at the company in a press release earlier this month.

Hunter Garth, Managing Director of IPG, stated “We understand there is some chaos now going on in the Colorado cannabis security market.  We understand certain companies are financially strained and there is uncertainty among the market.” He continued “IPG remains the leading security firm in the cannabis industry and we are eager to meet experienced guards from other companies.”

The company had purchased a building in July of 2014 but disclosed that it needed $400K to complete the renovations. It also disclosed that it will incur $1.6mm of general and administrative expenses in 2016, up from $1.5mm in 2015, as well as a significant increase in sales, marketing, research and development expenses.

Blue Line Protection Group’s stock has been in a big decline since it began trading in 2014, but the recent quintupling of price leaves it near an 11-month high: 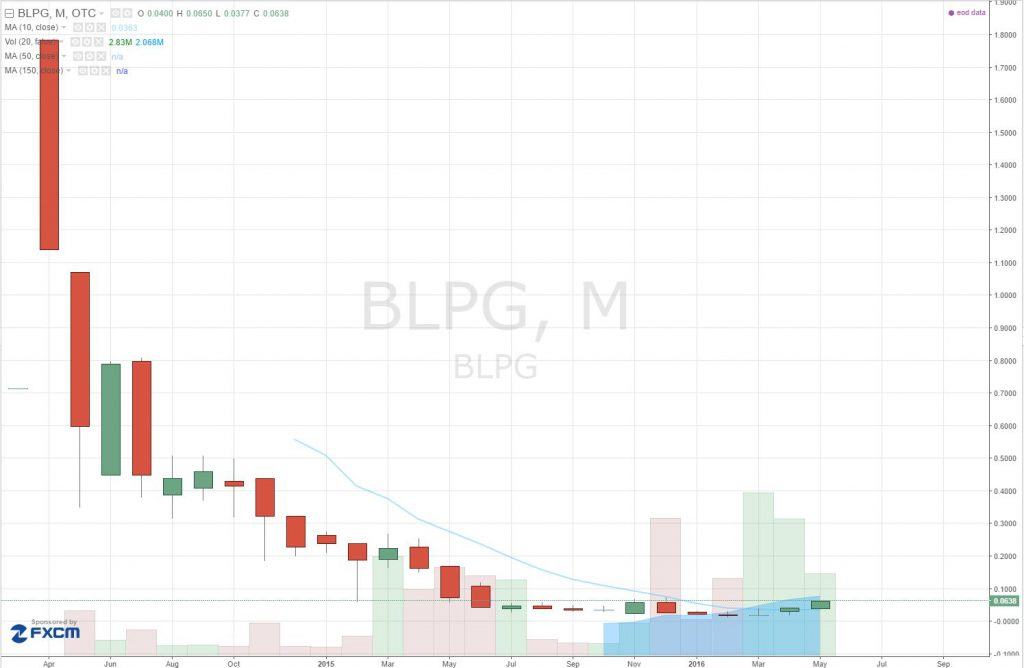