“While the Arizona operations we acquired recorded a solid, cash-flow positive quarter, our investments in growth, the transition to IFRS rules around acquisition accounting, as well as a number of one-off expenses and other non-cash charges, impacted our reported bottom line,” stated Scott Boyes, CEO of BCC. “Going forward into Q1, we anticipate reporting margins more commensurate with normal operations.”

With three transactions completed and another five nearing completion, we continue to successfully execute our aggressive growth strategy. Once the associated assets have been acquired and developed, we anticipate having 10 dispensaries in four states, with over 9,000 kg per annum cultivation capacity and over 1,200 kg per annum high-margin concentrates production capacity, forming an exceptionally strong foundation to build further multi-state growth on in the coming years.

Beth Stavola, President of BCC’s U.S. operations, added, “We remain on track with our growth initiatives. We expect our newest Arizona dispensary, currently being built out, to be operational in November. At the same time, we are testing the RotoGro technology, which we expect to increase our cultivation capacity, a proven industry bottleneck for growth. Finally, our JV with Panaxia will provide further product differentiation in all our current markets. Our brands continue to resonate well with the market and we look forward to rolling out Health for Life dispensaries and MPX concentrates in the new markets we are entering.”

Below follows a summary of the key financial metrics for the Company:

During the three-month period ending March 31, 2017, the Arizona operations sold 237,770 grams of cannabis flower and 28,819 grams of concentrate, generating combined gross revenues of $3.9 million. The average retail selling price per gram was approximately $14.50 (US$10.85). Accessories, edibles and ancillary products contributed approximately $0.5 million, for total quarterly revenues of $4.4 million. As the Company completed the acquisition of the Arizona assets in January of 2017, no contribution from these operations was recorded in the prior year, during which only minimal sales of nutraceutical products were recorded.

Under IFRS, inventory of cannabis, cannabis extractions, edibles and accessories held by the acquired AZ Business at the date of acquisition was recorded at full retail value, and the fair value becomes the deemed cost on a go-forward basis. As a result, the Company recorded no gross margin on any inventory acquired effective January 1, 2017 and sold during the period January 1, 2107 through March 31, 2017. As the inventory held by the acquired companies on January 1, 2017 was sold, the fair value was relieved from inventory and the transfer was booked to cost of sales. On this basis, gross profit for the three-month period ended March 31, 2017, after adjustment for the unrealized gain in the fair value of biological assets, was recorded at $1.0 million, reflecting a 23.5% gross profit margin.

For the three-month period, total expenses of $4.8 million were recorded, as compared to $0.9 million for the same period in the prior year. The increase in operating expenses was attributable primarily to the business combination with the Arizona assets in January of 2017, the costs of which were not carried in the prior year, as well as certain one-off costs related to the acquisition (integration of accounting practices acquired operations, audit, legal), the Company’s migration from the TSX-V to the CSE, and a non-cash charge ($0.5 million) related to the change in lease on the Company’s Owen Sound property. Furthermore, the Company recorded a total of $1.5 million in non-cash share-based payments.

The Company recorded a net operating loss of $3.8 million for the three month period ended March 31, 2017, as compared to a $0.8 million loss for the same period in the prior year. The increase in loss as attributable mainly to increases in general & administrative expense, share-based payments and the cost of goods sold, as recorded under IFRS acquisition accounting practices.

Adjusted for non-cash items, including the stock-based compensation expense, amortization and depreciation, non-cash occupancy costs, and the non-cash effects of accounting for biological assets and the non-cash effect of accounting for inventory acquired through acquisition at fair value, as well as interest and tax, the Company recorded a negative Adjusted EBITDA of $0.3 million for the three months ended March 31, 2017, as compared to negative $1.2 million for the same period in the prior year.

As at March 31, 2017, the Company held cash and cash equivalents of $21.5 million, while the Company had recorded current liabilities of $2.3 million as at this same date.

The Company will hold a conference call to discuss its financial performance, operations and outlook when the results for the first quarter of fiscal 2018 (the period ended June 30, 2017) are announced, which management anticipates will be within the next couple of weeks. Details of the call will be pre-announced in a notice of call.

Additional information relating to the Company, including with respect to financial results, operational events, acquisitions and financings, is available on SEDAR at www.sedar.com in the Company’s Audited Annual Financial Statements, Management Discussion & Analysis (“MD&A”) and CSE Form 2A – Listing Statement (the “Listing Statement”).

About The Canadian Bioceutical Corporation

BCC, an Ontario corporation, through its wholly owned subsidiaries in the U.S., provides substantial management, staffing, procurement, advisory, financial, real estate rental, logistics and administrative services to two medicinal cannabis enterprises in Arizona operating under the Health for Life (dispensaries) and MPX (high-margin concentrates wholesale) brands. The successful Health for Life (“H4L”) brand operates in the rapidly growing Phoenix Metropolitan Statistical Area (MSA) with a population of 4.6 million people. The award winning Melting Point Extracts (“MPX”) brand is carried by over 40% of Arizona dispensaries. The Company also owns assets in Massachusetts, supporting cultivation, production and up to three dispensaries in Massachusetts, as well as is supporting development of a third licensed dispensary in Arizona.

BCC continues to expand its U.S. footprint, being in the process of acquiring a cultivation and production wholesale business in Las Vegas, Nevada, and three dispensaries and a production license in Maryland. The Company also leases a property in Owen Sound, Ontario, for which an application to Health Canada has been made for a cannabis production and sales license. In addition, the Company will continue its efforts to develop its legacy nutraceuticals business. 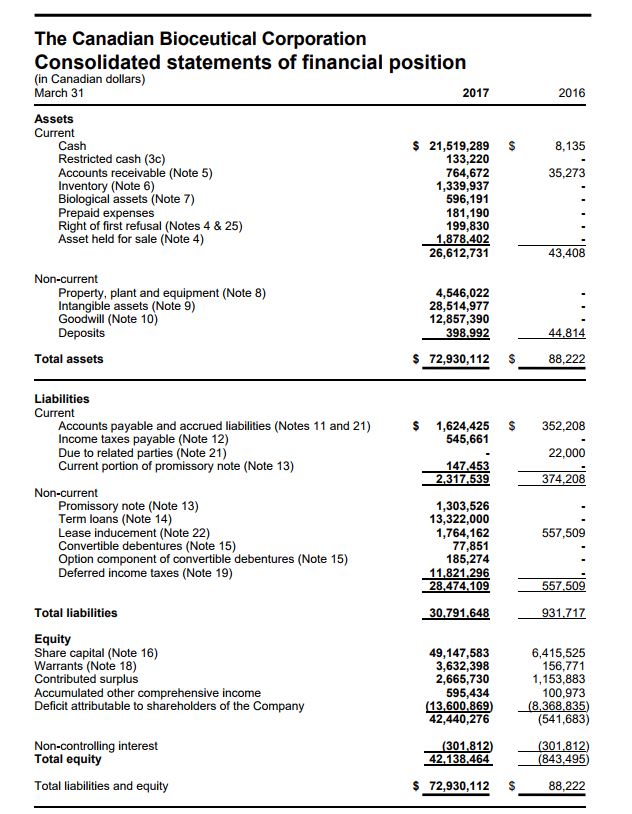 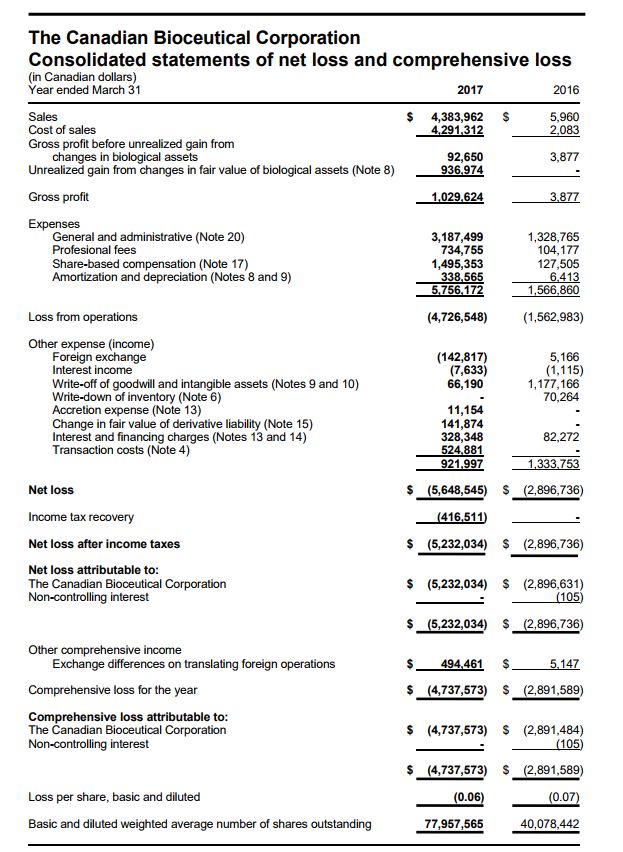 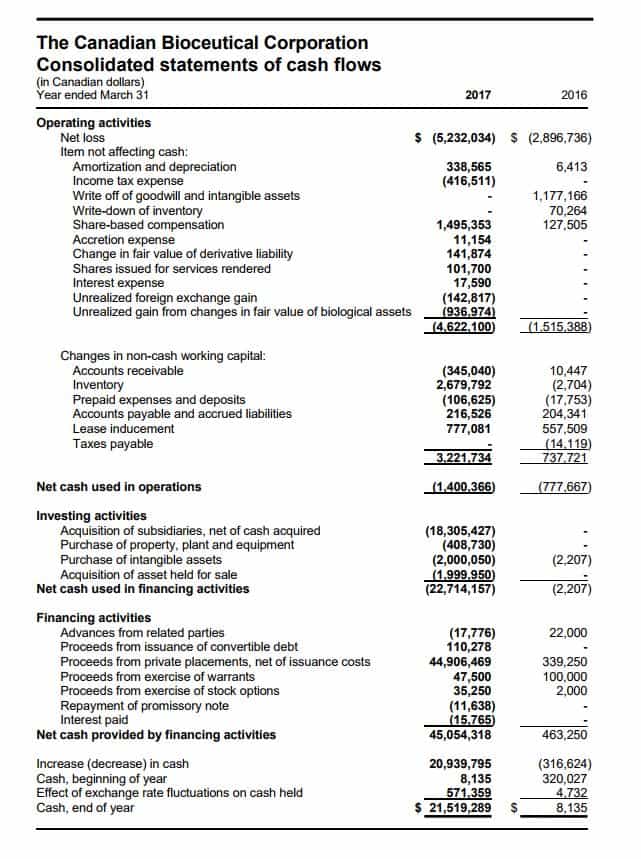 The Corporation uses “Adjusted Gross Profit” and “Adjusted EBITDA” as measures in this press release, which are not defined under IFRS. Management believes that these measures provide useful supplemental information to investors and is computed on a consistent basis for each reporting period.

“Adjusted EBITDA” is a metric used by management which is income (loss) from operations, as reported, before interest, tax, and adjusted for removing other non-cash items, including the stock-based compensation expense, amortization and depreciation, non-cash occupancy costs, and the non-cash effects of accounting for biological assets and the non-cash effect of accounting for inventory acquired through acquisition at fair value. Management believes “Adjusted EBITDA” is a useful financial metric to assess its operating performance on a cash basis before the impact of non-cash items and acquisition related activities.

A reconciliation from loss from operations to Adjusted EBITDA is provided below.

A reconciliation from Gross Profit to Adjusted Gross profit is provided below. 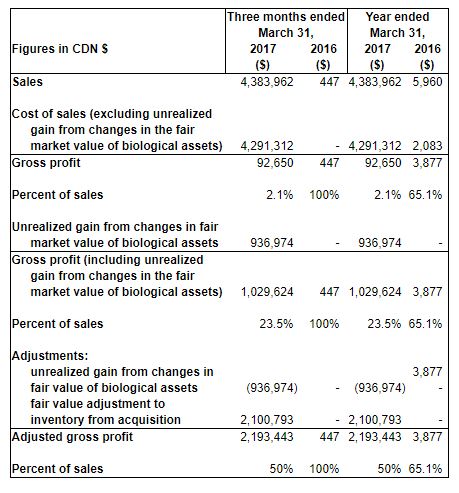