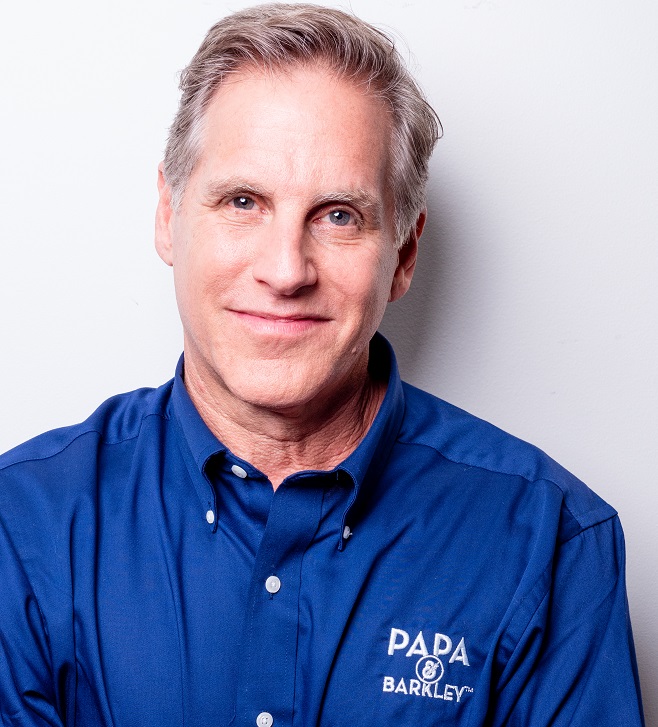 Papa & Barkley uses a proprietary, solventless process to manufacture its cannabis products, which are distributed throughout California. Founder and CEO Adam Grossman spoke with New Cannabis Ventures about the company’s California market presence, its national CBD product line and expansion plans. The audio of the entire conversation is available at the end of this written summary.

The idea for Papa & Barkley sprang from a personal experience. Grossman’s father suffered from a debilitating back condition that left him bedridden. So, Grossman started developing a cannabis-based pain balm in a crockpot. It had such an incredible impact on his father’s pain levels that Grossman started giving samples to friends and family.

Around this time, Grossman was pursuing the prospect of forming a fund to invest in early-stage wellness and nutraceutical companies. That entity became Egg Rock Holdings, which is the parent company of Papa & Barkley.

Manufacturing and Distribution in California

Papa & Barkley manufactures its products at its Eureka, California facility. The 60,000-square-foot facility, a former Kmart, also houses some of the company’s distribution space. The facility’s Humboldt County location places it at the epicenter of cannabis culture and right next to the state’s towering redwood trees, according to Grossman.

The company uses sun-grown, sustainable and pesticide-free cannabis sourced from farmers in Humboldt County as the input for its products. Rather than using standard extraction methods, like CO2 supercritical extraction, Papa & Barkley opts for a different approach. The company does not use chemicals during processing. Instead, it leverages mechanical processes, using kief and rosin in its different product lines, such as skincare and edibles. The company also has a proprietary lipid infusion process. Papa & Barkley does not use distillate or isolate, aiming instead for a full-spectrum, whole plant process that leaves the chemical profile of the flower intact in its oil and products.

In addition to its Eureka facility, the company has sales offices and distribution in southern California, as well as locations in Sacramento and Berkeley. Papa & Barkley distributes to approximately 88 percent of the state’s dispensaries, or approximately 460 retail locations.

Papa & Barkley has been able to navigate the numerous regulatory challenges in California in part through the support of General Counsel Chris Koepsel. Grossman and Shcharansky also actively participate in industry associations in an effort to stay abreast of the latest changes. The company also strives to remain flexible and adjust to regulatory shifts as they occur. Grossman recounted the massive undertaking his team managed following the California Bureau of Cannabis Control (BCC) packaging changes in January 2018. Team members spent hours re-stickering every single SKU in the Papa & Barkley distribution warehouses.

While acknowledging regulatory challenges, Grossman remains optimistic about the California cannabis market. He sees it as the best cannabis market in the country, but he hopes to see further dispensary expansion to drive safe access to products.

The company does intend to expand beyond California. It will either need to license its proprietary methods to the right kind of third-party partner, or it will have to acquire a license and establish operations in another state. The company is closely examining an opportunity that will allow it to bring its THC business to another state, according to Grossman.

Thus far, Papa & Barkley has focused on developing its brand and growing through organic means. But, Grossman would not discount M&A if the deal offered strategic value and the other company shared Papa & Barkley’s vision.

Papa & Barkley recently entered into the edibles market in California, using its solventless extraction method to develop chocolate and gummies. It blends rosin with its chocolate and infuses kief directly into the coconut oil used in its gummies.

Papa & Barkley has raised more than $50 million so far. The company did a friends and family round when it launched, and it has gone through a number of investment rounds since then. It has attracted a solid investor base that provides not only capital but also strategic support. For example, Dr. Orrin Devinsky participated in a round, and he serves on the company’s scientific advisory board. Dr. Devinsky heads up the NYU Langone Comprehensive Epilepsy Center, and he was involved in the clinical trials for Epidiolex, the only CBD drug approved by the FDA, according to Grossman.

The company now has two institutional investors that anchor its cap table, according to Grossman. Papa & Barkley is on the path to profitability, and Grossman hopes the company will not require future rounds. But, he believes the company has reached a point where it can rely on its existing investors if the need does arise. Changes in the regulatory environment may also attract additional investors.

Papa & Barkley keeps tabs on its performance across the multiple product categories in which it competes. For example, the company is the top player in the topicals category, having nearly 50 percent of the market, according to Grossman. It also carefully monitors marketing metrics, such as the cost of customer acquisition, and production metrics, such as the number of units made. The company takes a data-driven approach, constantly assessing its KPIs.

As the company develops new products and eyes new markets, it will face continuing challenges related to the COVID-19 pandemic. Papa & Barkley is also looking for ways to further develop its digital operations.

To learn more, visit the Papa & Barkley website. Listen to the entire interview: