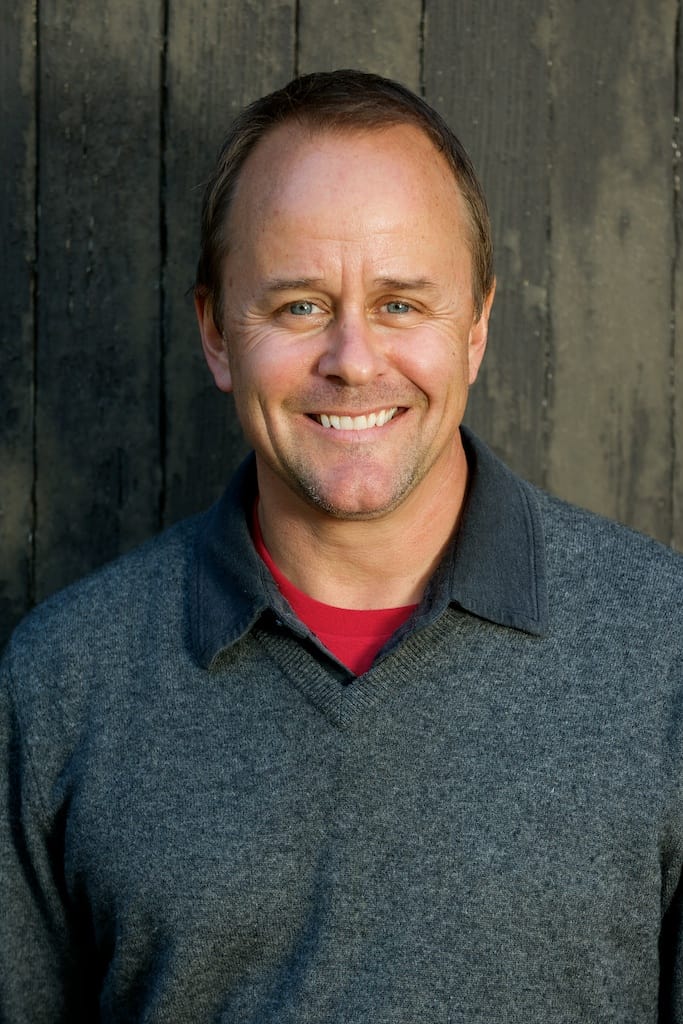 When the first dispensaries in the nation first started selling cannabis, in California more than 20 years ago, the consumer experience involved little choice beyond bulk flower and pre-rolled joints, and the vibe was strictly medical.

Things have changed. Now cannabis in California is a branding bonanza and instead of broadcasting a medical vibe, the state’s cannabis industry projects something more like the swaggering natural foods industry — a mix of wholesome, pleasure-seeking and green with a medical sideshow.

With the state poised to launch a recreational sales market next year — following the leads of Colorado, Washington, Oregon, Alaska and Nevada —  industry stakeholders have been eager for robust, comprehensive data detailing the contours and particulars of this commercial marketplace, the largest of its kind in the world.

With the launch of its California data last week, BDS Analytics now offers a deep dive into the California consumer marketplace, with incisive insights into a wide variety of retail and consumer trends that have rooted in the Golden State.

All of this is of extreme importance to industry stakeholders, as California so often sets national trends. In other words, what happens in California among consumers often ends up happening everywhere else.

California’s regulatory regime, for the time being, still only allows those holding state-issued medical cannabis cards to legally purchase cannabis. But that hasn’t stopped sales in the state from eclipsing the other states with recreational sales. 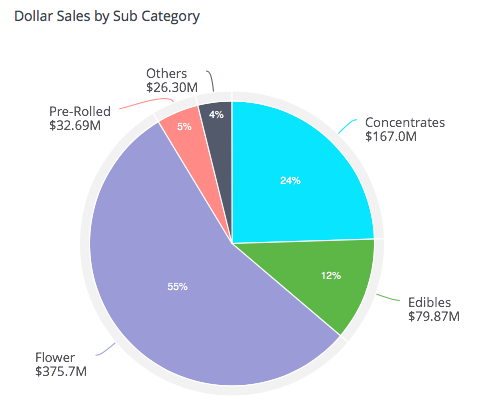 In fact, sales in California represent about 34 percent of legal sales in the United States. In comparison, combined sales in Colorado, Washington and Oregon represent 41 percent of U.S. sales.

Let’s consider how sales broke down by category.

The booming concentrates market in California generated $169 million in sales in the 2nd quarter of 2017. The category is dominated by vape pens, which capture a hefty 61 percent of dollars sold. This embrace of vape pens among Californians is profound — by comparison, consumers in Colorado devote only 34 percent of their concentrate shopping dollars to vape pens, and Washingtonians are even less enthusiastic. Vape adoration tends to be higher among shoppers within recreational, rather than medical channels (for example, pens are more popular in Colorado’s recreational shops than its medical dispensaries). But California, at least nominally, is a medical marketplace. 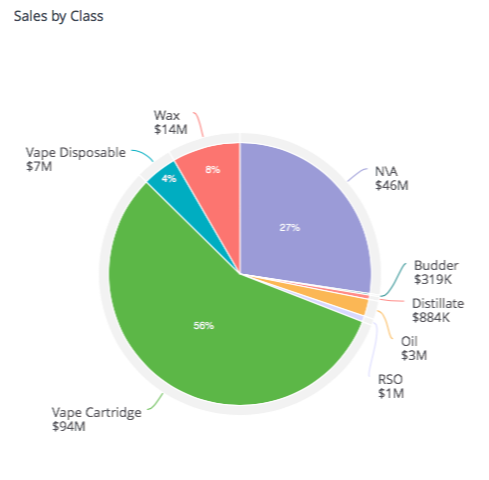 Meanwhile, dabable forms of concentrates like shatter and wax, which are popular in other states (especially in Colorado), do not come close to vape sales — wax captures 9 percent of the market, and shatter 6 percent in California. 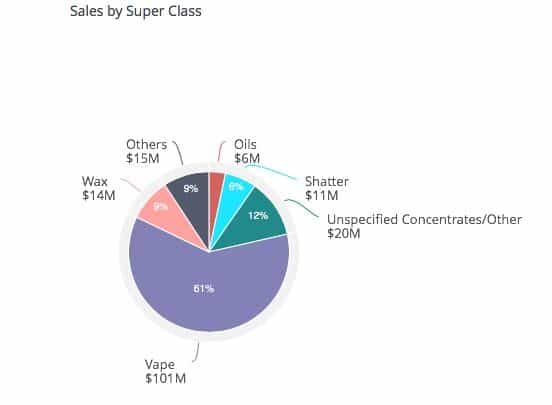 California dispensaries and delivery services generated over $81 million in sales from cannabis edibles during the 2nd quarter of 2017. Californians prefer candy, like gummies and hard candy, to other forms of edibles. Candy commands 29 percent of the edibles market in California, with chocolates coming in second at 24 percent, infused foods at 17 percent, tinctures at 15 percent, pills at 7 percent and beverages at 5 percent. The top-selling edible in California? The mighty gummy, which captures 19 percent of the edibles market and a whopping 65 percent of the candy market. The second most popular candy product in California, more popular than hard candy, is caramels. 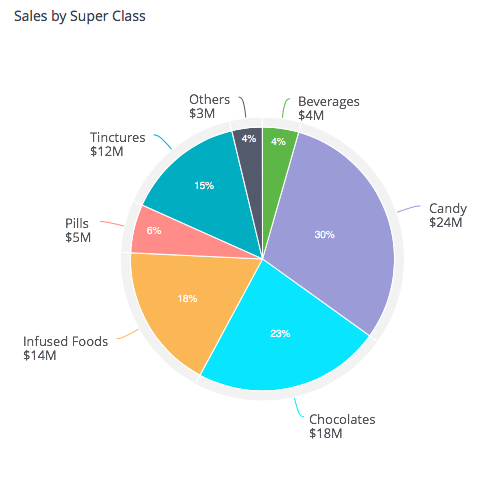 With 55 percent market share and $375 million in sales in the 2nd quarter of 2017, Flower is the most popular product at California dispensaries. Flower is a term about as descriptive as “wine” — just as wine can mean Syrah, Cremant du Jura, port and thousands of other things, “flower,” too, is broken down into thousands of strains. BDS Analytics, for example, tracks sales of 13,000 uniquely named strains, with more added every month.

California tracks other states when it comes to the strain it crowns as king — Blue Dream. Californians do stand out, compared to Coloradans, Washingtonians and Oregonians, for their love of the indica genus of cannabis. Preferences in all states, including California, are fairly evenly divided between the two styles. But indica’s popularity in California is more pronounced than in other states.

Flower prices are higher in California than in Oregon, Colorado or Washington. The average retail price for a gram of flower sold at California dispensaries was $9.03 (pre- tax) in the 2nd quarter of 2017. In contrast, the average gram sold in CO, OR, and WA combined was $5.96 over the same period.

The world of cannabis products that are applied, rather than ingested, is not large — topicals capture less than 1 percent of the California market. In the 2nd quarter of 2017, balms and salves capture 49 percent of the topicals sales in CA, followed by patches (5 percent), creams (20 percent) and a variety of other products.

How California Consumers Differ from Consumers in Other States

Colorado, Washington and Oregon (as well as Alaska and now Nevada) have a head-start on California with recreational sales. As referenced earlier, California’s cannabis landscape today resembles a recreational marketplace more than a medical one, a situation that is probably connected to the state’s lack of consistent regulation, as well as the scale of the market and its ability to support major brands. Whether California’s embrace of recreational sales, and implementation of a statewide regulatory framework will shift consumer and retail trends remains to be seen. But for now, we find clear differences, as well as similarities, between California consumers and those in other states.

Some of the differences, like Californians love for vape pens, have strong marketplace implications. Others are just interesting. Consider pre-rolled joints. This is a small category in California, capturing 5 percent of the California cannabis market, which is roughly in line with Colorado and Oregon (in Washington, however, pre-rolls represent 11 percent of the market).

But Californians stand far apart from the other states when it comes to infused pre- rolls — joints that come with an extra THC boost from concentrates like oil, keef, caviar and hash. In California, the pricier infused pre-rolls (averaging $14.08 per joint, compared to $5.12 for joints without the added oomph) command 31 percent of the market.

We know Golden Staters have fully endorsed infusing their pre-rolled joints with concentrates, but Californians stand out, too, for their enthusiasm for infused foods. Consumers spend enough on THC-infused brownies, cookies, nut butters and a wilderness of other foods to elevate the category to 17 percent of the edibles marketplace. In Oregon, on the other hand, infused foods represent just 5 percent of the market, and in Colorado infused foods capture just 8 percent. Washingtonians are more keen, where spending lifts infused foods to 12 percent. Still, California remains the pot brownie capital of the country.

Douglas Brown founded Contact High Communications in Boulder, CO after spending more than two decades as a journalist covering everything from the White House and Capitol Hill to technology, business, crime, sex and food. At Contact High he works with international media help tell his clients’ stories, and he provides content — everything from op-eds to white papers to blogs and ghost-written pieces for magazines and newspapers.

BDS Analytics service offers myriad insights into the complex and enormous California cannabis marketplace — this is just a slim glimpse. BDS clients receive all of the up-to-date data at their fingertips, but we anticipate routinely offering close looks at California retail and consumer trends in New Cannabis Ventures