Innovative Industrial Properties (NYSE: IIPR) priced its IPO this week, a deal that marks a significant milestone for the cannabis industry but that was a major disappointment for the company and its investors. The stock, which began trading on December 1st, quickly broke the IPO price of $20 and closed Friday at $18.45, producing a two-day loss of 7.75% for those who bought the offering and closing below the $18.60 price to the underwriters with their discount. 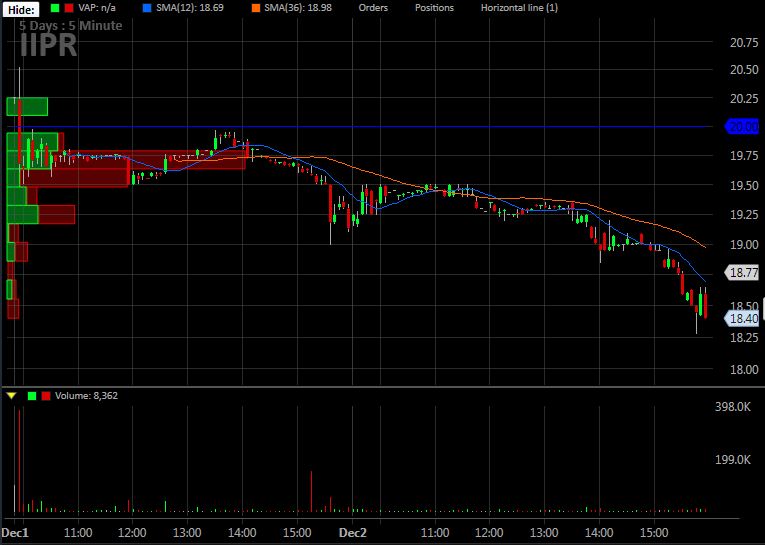 As much as I was rooting for success, the poor performance didn’t surprise me. In my preview on 420 Investor (subscription required), sent to subscribers on November 19th, I concluded:

The IIPR IPO is very exciting for the cannabis industry, as it provides many investors with the potential to participate in the ancillary market with a liquid investment vehicle. While I don’t have optimistic near-term expectations for the price, the stock will likely provide a very high dividend relative to the $20 IPO price once it deploys the capital. If management is able to leverage its balance sheet with debt or preferred equity and to execute, the NAV may rise over time. I have pointed to several risks that investors should contemplate and that suggest the stock will not receive a high valuation relative to its income.

Some of my concerns:

At the time of my preview, the deal was supposed to price before Thanksgiving and had been expected to total $175mm (8.75mm shares). Subsequently, the deal was reduced in size several times, ultimate pricing just 3.35mm shares ($67mm), producing net proceeds of just $60.8mm (unless the underwriters exercise their option to increase it, which case the 502,500 additional shares will result in gross proceeds of $70.1mm). Additionally, the founders elected to give back their 15% equity stake, a move that makes the deal better economically to investors but that removes “skin-in-the-game” and points to larger equity awards in the future.

The reduction in the deal size is a serious near-term impediment. The company’s first potential asset, the New York production facility owned by PharmaCann, will represent about half the overall assets, adding to my concern about asset concentration. Fortunately, New York has recently improved its medical cannabis program, but it still isn’t likely to be a robust market. Additionally, unlike Class A malls or office buildings, it could be extremely difficult to replace an operator that fails. Finally, with the smaller amount to invest, the company’s operational expenses will eat into income, weighing on the dividend. The prospectus includes a projection of $4.5-5.5mm in cash expenses on an annual basis.

While it is an accomplishment to have the public listing that allows it to develop its portfolio, IIPR is too risky in my view at present.  While many point to the success in Facebook (NASDAQ: FB) despite a terrible post-IPO reaction as evidence that IIPR could perform well over time, this analogy is flawed. FB had tremendous assets and revenue, while IIPR doesn’t yet. Still, I think that IIPR could succeed over time and will be watching how it develops.

For IIPR to succeed, it will need to deploy its initial capital, build confidence with investors and raise additional capital so that it can begin paying a substantial dividend that reflects the underlying yields of its assets and can scale its operations. The fact that it has fared so poorly initially in terms of attracting investor interest, which may be mainly related to the overhang created by the uncertainty regarding federal enforcement of the Controlled Substances Act, may be a silver lining for IIPR, as it is unlikely to see any rivals go public with the same strategy.  One smart move by the company might be to investigate acquiring real estate operations with portfolios rather than looking for single properties. An example of this would be private cannabis REIT Kalyx Development, which would not only boost its assets but also increase its in-house cannabis market expertise.

For those who are monitoring IIPR, it could find some support at its tangible book value of $17.83 per share.  Until the company deploys capital, initiates a dividend and raises additional capital, it will remain a highly speculative investment. For those with a longer-term perspective, the company addresses a critical issue facing the cannabis industry, which is unable to use traditional mortgage lending to finance its growth.  IIPR, with a unique publicly-traded vehicle, now has the opportunity to be a capital provider to one of the fastest growing industries in the country.