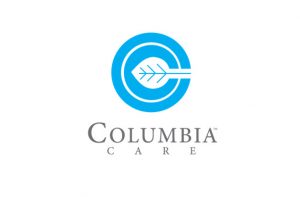 NEW YORK-March 10, 2020-(BUSINESS WIRE)–Columbia Care Inc. (NEO: CCHW) (OTCQX: CCHWF) (FSE: 3LP) (“Columbia Care” or the “Company”), one of the largest fully integrated operators in the global medical cannabis industry with licenses across the US and EU, today reported financial and operating results for its fourth quarter and full year ended December 31, 2019. All financial information is provided in US dollars unless otherwise indicated.

We are now active in 14(2) US jurisdictions with 35 dispensaries in operation and six more awaiting regulatory approval to open. We successfully launched adult use sales in Illinois and Massachusetts markets where we experienced three- to five-times revenue growth almost overnight. 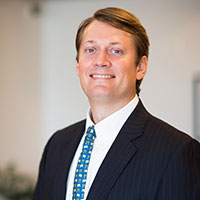 We remain on track to close our acquisition of The Green Solution, Colorado’s market leader, and with as many as seven of our medical-only markets potentially converting to adult use, the timing could not be better to create shareholder value and build the best company in the industry.

“Since we went public last April, our team has doubled the number of markets in which we operate, opened more dispensaries in one year than we had in the previous seven combined, and most importantly, provided access to our portfolio of proprietary, precision dosed, high-quality cannabis-based medicines to a record number of patients and guests. We continued to innovate, improving the customer experience through the national launch of the CNC Card, the nation’s first legal credit card for purchasing cannabis products, now available in eight markets and growing, as well as through the expansion of our proprietary home delivery service, CC@Home. Following the success of the retail and e-commerce launches of Columbia Care Platinum CBD products in the US, we entered the European marketplace in December and January, taking an asset-light approach by leveraging existing resources and selling in federally regulated and reimbursed medical marijuana programs. Now that we have completed our 2019 capital program, we can leverage our fixed assets to drive profitability in each market and on a consolidated basis. Investors should expect the pace of activity to increase as we execute against our unrelenting desire to make Columbia Care the best-in-class and most-trusted global cannabis provider.”

Adjusted revenue increase was driven by a combination of the Company’s on-going expansion of its dispensary network as well as higher consumer demand for its products at its existing dispensaries highlighted by the launch of adult use sales in Massachusetts. Regulatory delays for facility and product launches continued to drive timelines.

Excluding the impact of fair value adjustments for biological assets, gross profit for the fourth quarter and full year 2019 was $5.5 million and $20.6 million, or an increase of 40% and 25%, respectively, over the prior year periods.

The Company’s gross profit for the fourth quarter and full year 2019 was $18.2 million and $36.9 million respectively, compared to fourth quarter and full year 2018 gross profit of ($0.6) million and $17.1 million. The increase in gross profit was primarily driven by volume growth in business as well as an increase in the volume of unharvested plants and inventory, partially offset by production costs of new facilities that were not yet operating at commercial scale.

Adjusted EBITDA for the fourth quarter and full year 2019 was ($13.9) million and ($46.9) million respectively, compared to ($2.9) million and ($11.1) million for the prior year periods. Changes in Adjusted EBITDA were primarily driven by the Company’s on-going execution against its 2019 growth initiatives, including new and existing market expansion, post-construction/pre-approval facility operating expenses, organization growth and professional fees. See “Table 2 – Reconciliation of IFRS to Non-IFRS Measures”.

Net loss for the fourth quarter and full year 2019 was ($28.0) million and ($106.7) million, compared to ($20.4) million and ($39.7) million for the prior year periods, primarily attributable to increases in share-based compensation, salary and benefit costs, professional fees and overall facility costs resulting from the Company’s on-going expansion in both new and existing markets.

For Fiscal 2020, the Company is providing guidance to reflect the transition from its 2019 growth strategy of activating licensed jurisdictions to achieving scale in each market. As a practical matter, in providing is 2020 guidance, Columbia Care does not incorporate changes in the regulatory environment, including the potentially positive impact of any future transitions from medical only to medical and adult use programs, despite our expectations for several markets to convert in the next 12 months. The Company also excludes recent wins in Missouri and Utah as well as any new market openings, the development of additional assets, future M&A and/or license pursuit activities. See “Caution Concerning Forward-Looking Statements” below for further discussion.

In assessing performance within each market, it is important to note that markets which have been operational for more than 12 months typically provide a positive EBITDA contribution before corporate overhead. The Company has optimized its dispensary build-out plans for Florida utilizing temporary locations instead of traditional dispensaries, allowing Columbia Care to reach its target population with much less capital investment and an improved labor model. As a result, the Company expects to have a total of 14 dispensaries in operation by the end of Q1 2020, with an additional six to eight temporary pickup locations available throughout the state.

For fiscal year 2020, the Company expects the following (pro forma guidance assumes a full year of The Green Solution):

The Company will report complete financial results for the fourth quarter and full year 2019 on Tuesday, March 10, 2020 at 8:00 a.m. EDT. To access the live conference call via telephone, please dial 1-877-407-8914 (U.S. callers) or 1-201-493-6795 (international callers), no passcode is required. A live audio webcast of the call will also be available in the Investor Relations section of the Company’s website at https://ir.col-care.com/.

A replay of the audio webcast will be available in the Investor Relations section of the Company’s website approximately 2 hours after completion of the call and will be archived for 30 days.

In this press release, Columbia Care refers to certain non-IFRS financial measures, such as adjusted revenue, adjusted EBITDA and gross profit excluding changes in fair value of biological assets. These measures do not have any standardized meaning prescribed by IFRS and may not be comparable to similar measures presented by other companies. Columbia Care considers certain non-IFRS measures to be meaningful indicators of the performance of its business. A reconciliation of such non-IFRS financial measures to their nearest comparable IFRS measure is included in this press release and a further discussion of some of these items is contained in the Company’s Management, Discussion and Analysis for the nine months ended September 30, 2019 dated November 5, 2019.

Columbia Care Inc. is one of the largest and most experienced multi-state operators in the medical cannabis industry, with licenses in 18 jurisdictions (2,4) in the US and the EU. With over 1.6 million sales transactions since its inception, Columbia Care is a patient-centered organization setting the standard for compassion, professionalism, quality, caring and innovation, working in collaboration with some of the most renowned and innovative teaching hospitals and medical centers in the world. The Company is committed to providing the type of education and transparency patients deserve and quality of product that clinicians expect. For more information on Columbia Care, please visit www.col-care.com. 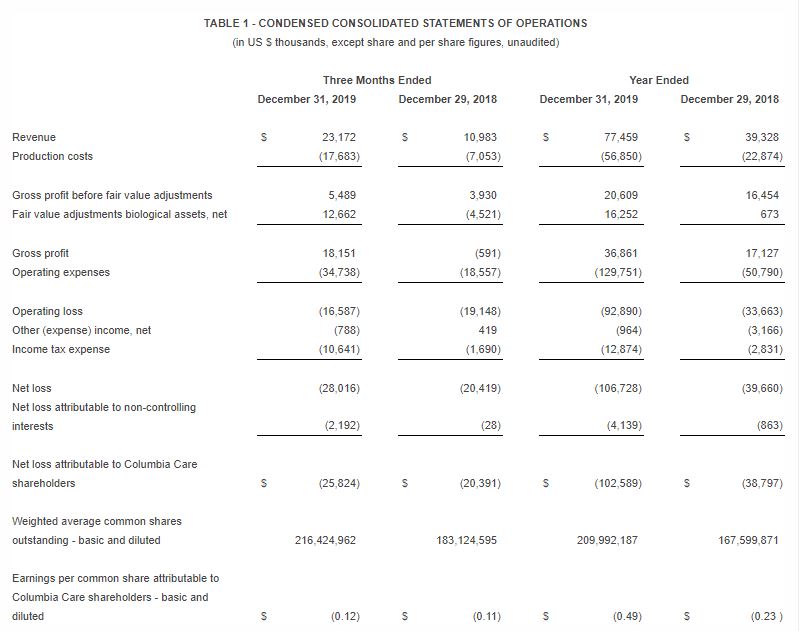 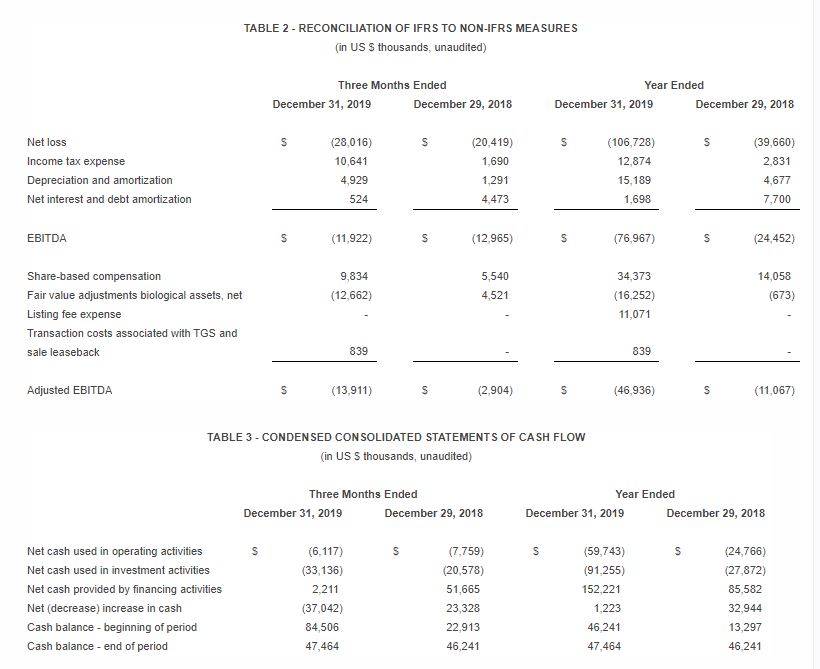 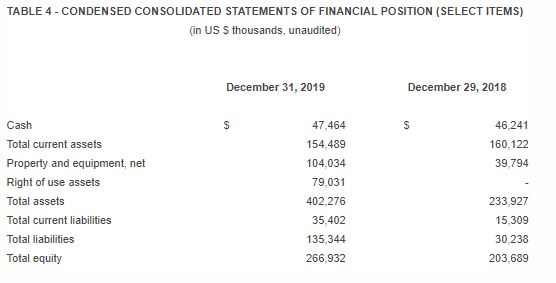 Columbia Care and Cresco Labs Are Moving Towards Closing Combination