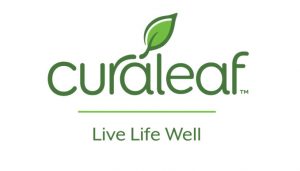 We have made significant progress over the last few months in executing on our strategy to become the leading vertically integrated multi-state cannabis operator in the United States. The recently announced acquisitions of Select and Grassroots, as well as, tuck in acquisitions in Arizona, California, Nevada and Ohio position Curaleaf as the undisputed leader in the cannabis industry. 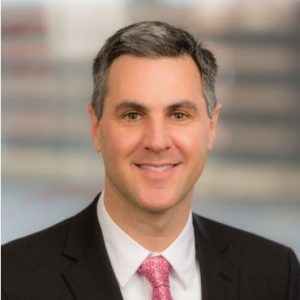 With the industry’s largest operational footprint, we have the scale to rapidly accelerate growth across the country. I continue to believe Curaleaf is the best positioned operator in the cannabis space with the potential to create substantial shareholder value.

Neil Davidson, Chief Financial Officer of Curaleaf, added, “We achieved a number of milestones in the second quarter, foremost, we generated positive Adjusted EBITDA for the first time in Company history, and we achieved record pro forma revenue of $111 million. As our operations continue to ramp, we expect to see further improvement in our overall operating margins and an improving and accelerating cash flow profile. We continue to focus on positioning ourselves as the industry leader through prudent capital allocation to deliver strong organic growth.”

In this press release Curaleaf refers to certain non-IFRS financial measures such as Pro Forma Revenue, Managed Revenue, Gross Profit on Cannabis Sales and Adjusted EBITDA. These measures do not have any standardized meaning prescribed by IFRS and may not be comparable to similar measures presented by other issuers. Curaleaf defines Managed Revenue as total revenue plus revenue from entities for which the Company has a management contract but does not consolidate the financial results based on IFRS 10 – Consolidated Financial Statements. Curaleaf defines Pro Forma Revenue as Managed Revenue plus revenue from operations of pending and closed acquisitions as if such acquisitions occurred on January 1, 2019. The Company defines Gross Profit on Cannabis Sales as retail and wholesale revenues less cost of goods sold. Adjusted EBITDA is defined by Curaleaf as earnings before interest, taxes, depreciation and amortization less share-based compensation expense and one-time charges related acquisition and financing related costs. Curaleaf considers these measures to be an important indicator of the financial strength and performance of our business. The following tables provide a reconciliation of each of the non-IFRS measures to its closest IFRS measure. 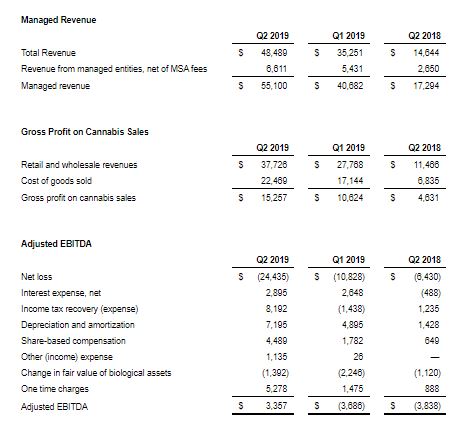 Curaleaf Holdings, Inc. (CSE: CURA) (OTCQX: CURLF) (“Curaleaf”) is the leading vertically integrated multi-state cannabis operator in the United States. It is a high-growth cannabis company with a national brand known for quality, trust and reliability. The company is positioned in highly populated, limited license states, and currently operates in 12 states with 48 dispensaries, 14 cultivation sites and 13 processing sites. Curaleaf has the executive expertise and research and development capabilities to provide leading service, selection, and accessibility across the medical and adult-use markets, as well as in the CBD category through its Curaleaf Hemp brand. On May 1, 2019, Curaleaf announced the acquisition of the Select brand from Cura Partners for approximately $949 million. On July 17, 2019, Curaleaf announced the acquisition of Grassroots for approximately $875 million. 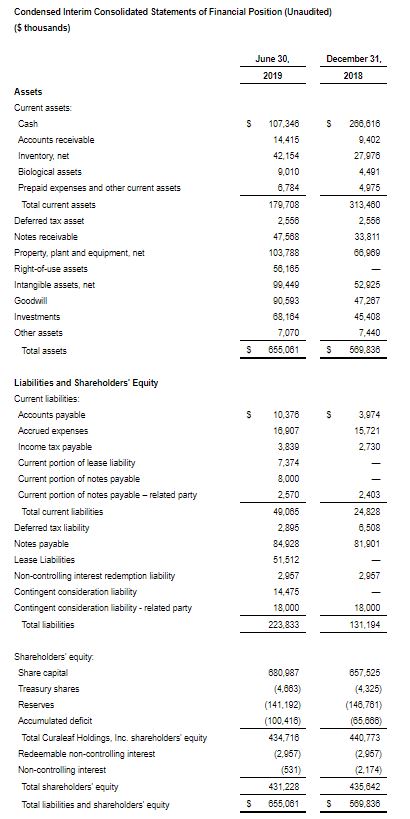 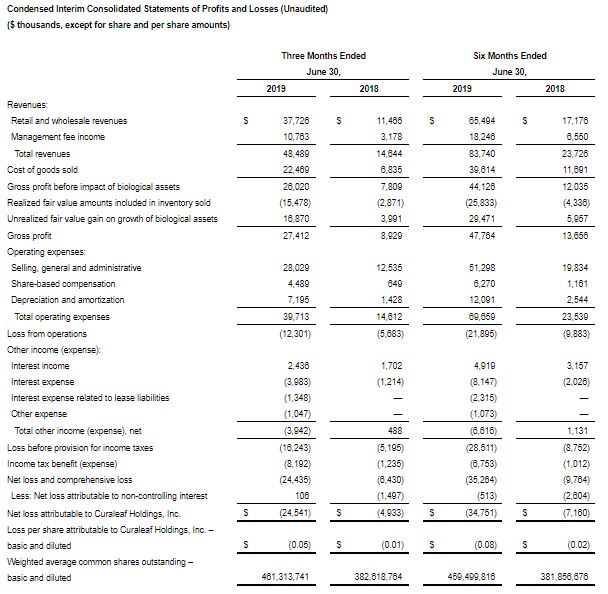