Although a large sector of cannabis products remain illegal under U.S. federal law, state-legalized cannabis and cannabidiol (CBD) from hemp will translate into billions of dollars in revenue. From marijuana sold via licensed dispensaries where it’s legalized for recreational use to hemp-derived products that are emerging at retail outlets, cannabis could generate new revenue for those that can capitalize on related opportunities. It could also pose significant risk for suppliers and retailers that choose to turn a blind eye to the current and projected growth of cannabis. 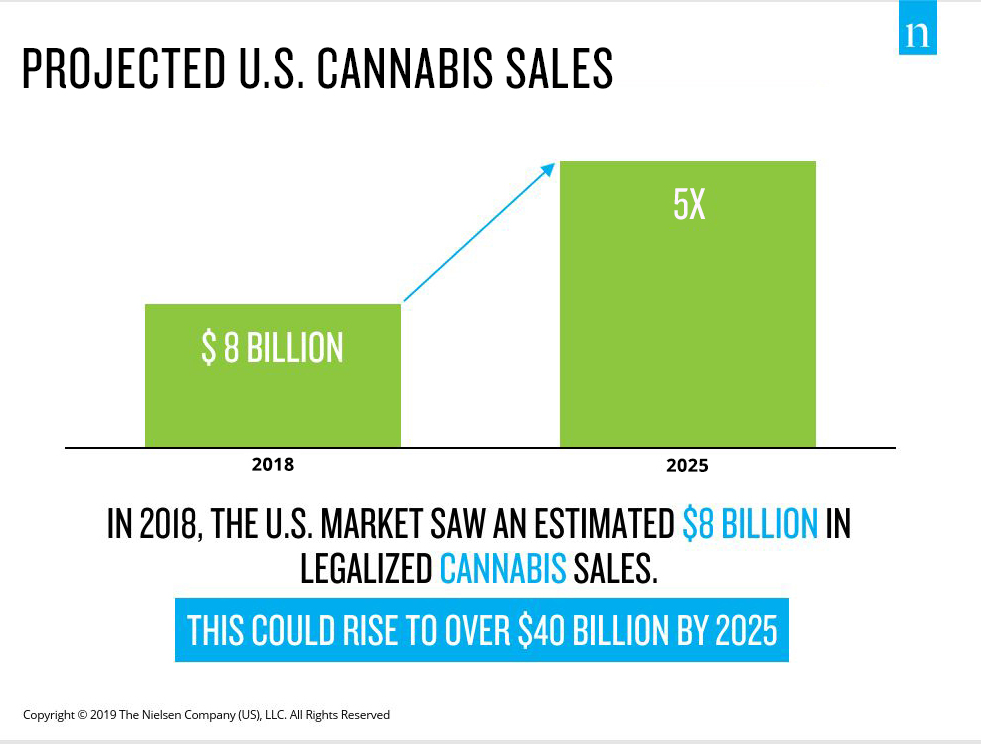 When it comes to what falls under the umbrella of cannabis-related products in America, there’s more to consider than you might think. Cannabis is a broad term, and its full array of products can be classified into two groupings based on which plant they are derived from: those from marijuana and those from hemp. Compounds derived from each of these plants can be further delineated in one of three ways: those that cause a “high” because they contain the psychoactive compound tetrahydrocannabinol (THC); those that contain the non-psychoactive CBD compound and lastly, cannabis products that don’t contain THC or any noteworthy contents of CBD, such as hemp seed oil or seeds. What might be cause for confusion here is that CBD can be either marijuana- or hemp-derived. 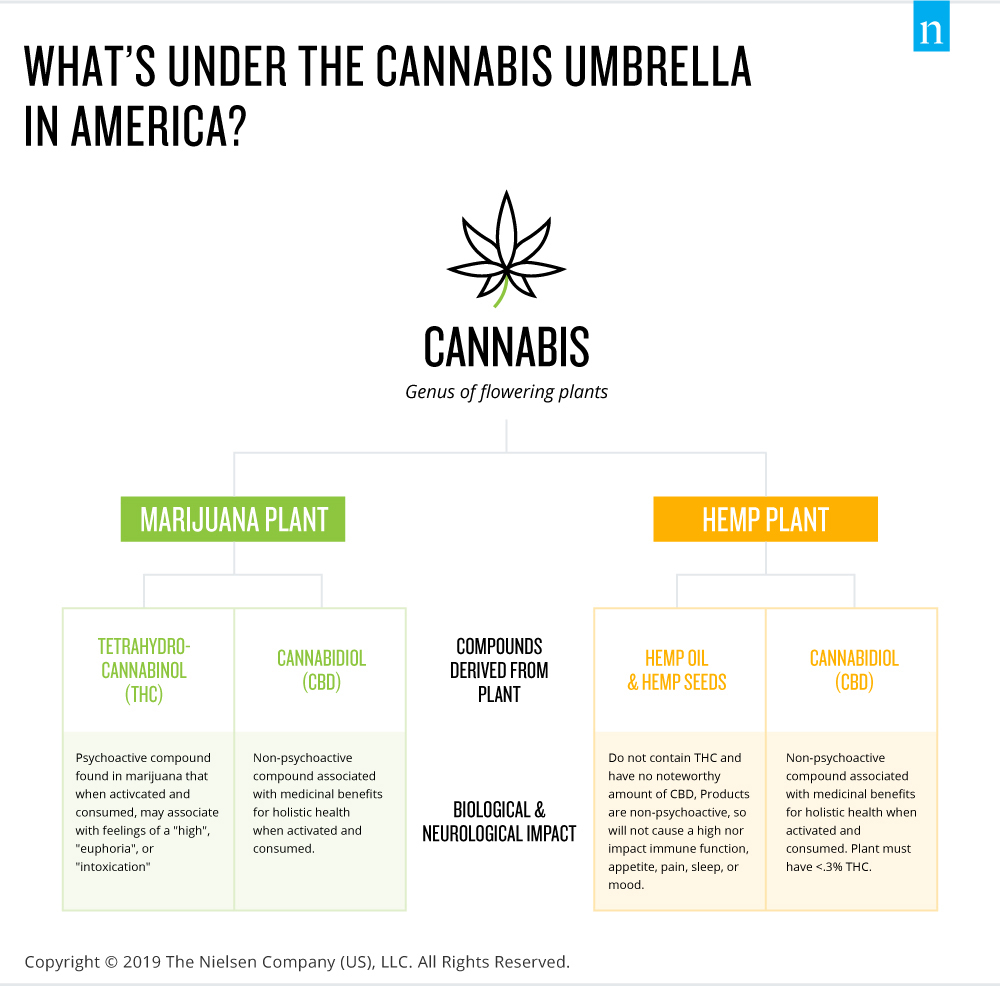 The legal constraints for use and sale vary by retailer, state and even by city for each sector of the cannabis market, and therefore demands careful attention by all prospective entrants to this market. This landscape is fluid and poised for change. Take marijuana products for example: If recreational marijuana use were to become legal in all of the states in which it’s actively being considered today, we could very soon be living in a country where over one-third of U.S. adults reside in a legal recreational use state for marijuana consumption. But, beyond legalization, what defines and drives the overall cannabis market today?

As the cannabis category matures and mainstream access expands, its emergence won’t affect all consumer packaged goods (CPG)categories, but it’s impact will be broad with relevance to a large cross-section of categories.

THINK BROAD WITH CANNABIS AND ITS CPG IMPACT

Recent developments related to hemp-derived CBD highlight why companies need to think broadly when it comes to cannabis. In the U.S., as of December 2018, hemp became an official agricultural commodity with the passage of the Farm Act. And although there are still FDA restrictions on hemp-derived CBD as an additive in ingestible products and topical products marketed as therapeutic rather than cosmetic, several major U.S. retailers are now selling non-ingestible forms of hemp-derived CBD. Emerging on shelves today, consumers are likely to see topical products like lotions, oils, balms and creams that are infused with hemp-derived CBD. And despite the FDA pronouncements, some suppliers and retailers are already selling ingestible forms of hemp-CBD, as well as several states that have passed their own laws allowing CBD in ingestibles.

As legal restrictions are loosened, the process of bringing a hemp CBD product to market, including the leveraging of mainstream distribution channels, could soon mirror that of other CPG products. From over-the-counter medications, to cosmetics, pet care and even products throughout the traditional food and beverage space, the future potential of hemp-based CBD could impact billions in CPG sales across categories.

LEGALIZED CANNABIS WON’T BE A WIN FOR ALL

Substitutability of existing category purchases by cannabis purchases—in certain situations and occasions—is part of the risk equation. For instance, a substantial portion of cannabis-interested adults are also beer and other alcoholic beverage drinkers. On the flip side, those who figure out how to leverage cannabis-related situations, occasions, products, and partnerships may reap the rewards. Of course, this will vary by product segment and brand, and also by type of cannabis product being considered, but that’s all the more reason to invest in understanding cannabis trends and purchase behaviors. 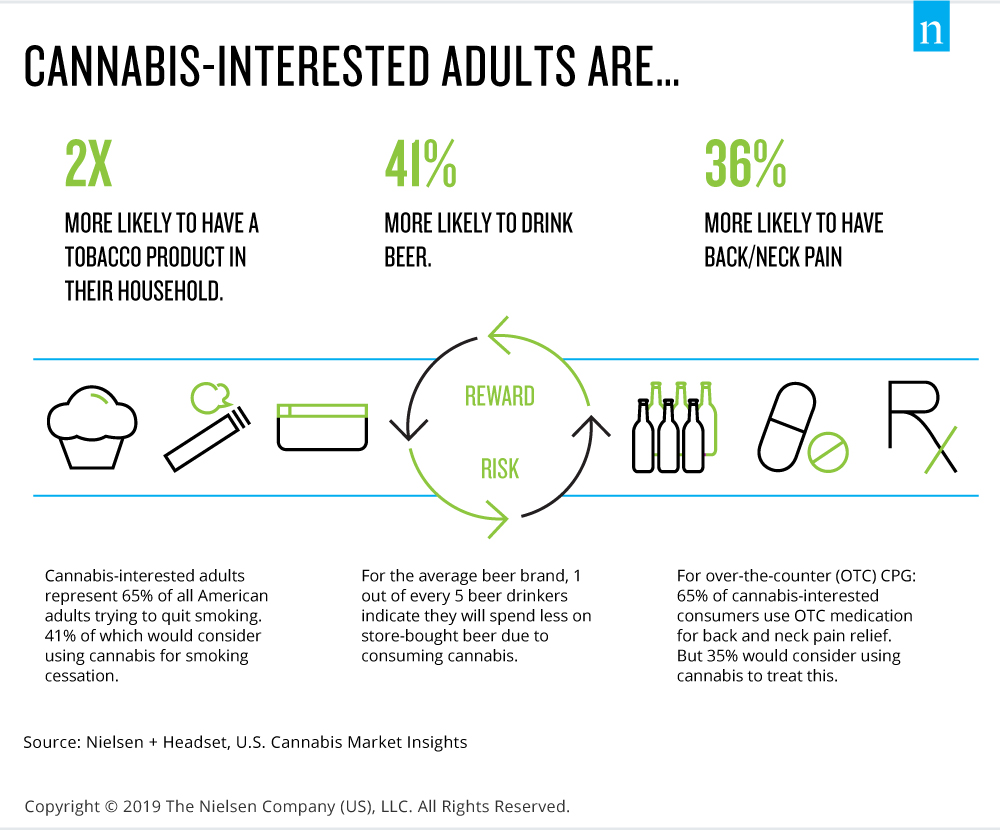 The legalization of various hemp CBD products, the potential for widened recreational marijuana legislation and the growing popularity of hemp-seed and oil-based products will create opportunities to pursue new revenue streams. And while it won’t be a tide that lifts all boats, it will elevate many.

EARLY ADOPTERS WILL BE REWARDED

It’s more important than ever to prepare your brands and products for the demands of cannabis-interested consumers before the gates open to even broader assortment, distribution and messaging. For marijuana-based cannabis sold in licensed dispensaries in the handful of legalized recreational use states, the market has moved swiftly. We’ve seen dynamic shifts in marijuana product format preferences—even in the absence of traditional marketing power behind them. Where marijuana flower was once the format of choice in state-licensed dispensaries, it fell from a majority share of 77% in 2014 to just 48% of sales in 2018. 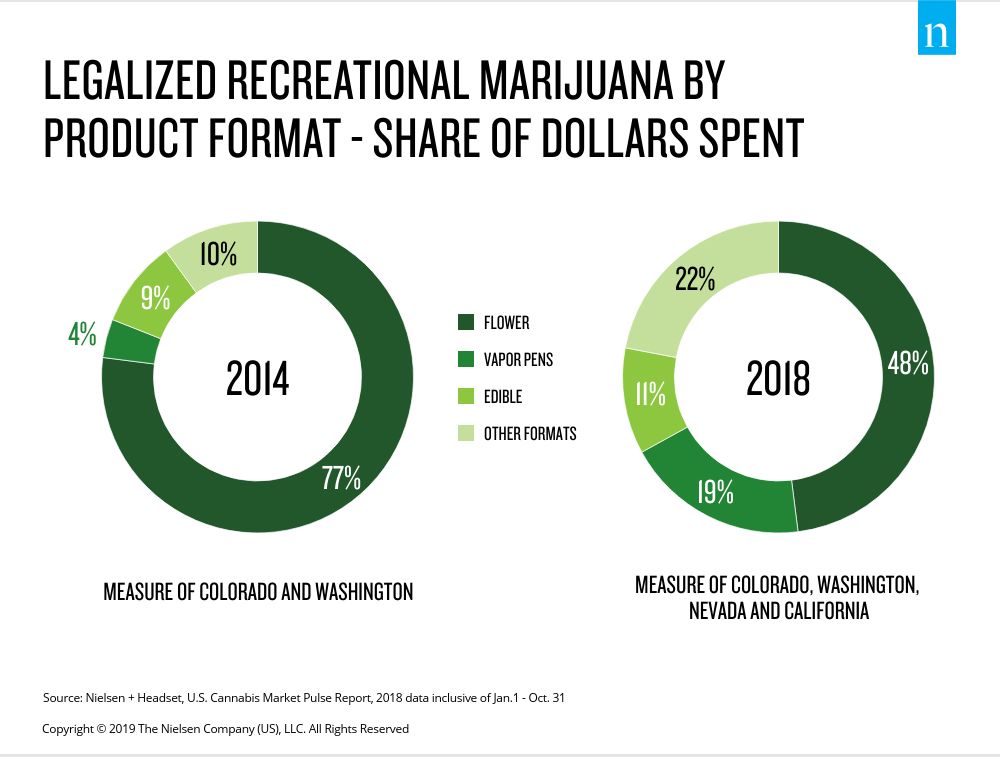 The brand landscape in the marijuana space is exploding with hundreds of emerging brands seeking to capitalize on the growth opportunities. This is not unlike the rise of small brands we’ve been tracking in the traditional CPG space for years. In 2014, the marijuana market was one of consolidation, where each marijuana producer, extractor and edibles manufacturer operated as its own individual brand. Today, the competitive landscape is much more diverse as are the needs of an expanding population of legal marijuana users. There were just 166 marijuana brands across two legalized states in 2014. By 2018, there were over 2,600 marijuana brands across four legalized states, which represented 10x as many brands in Washington and over 7x as many in Colorado in their early days. 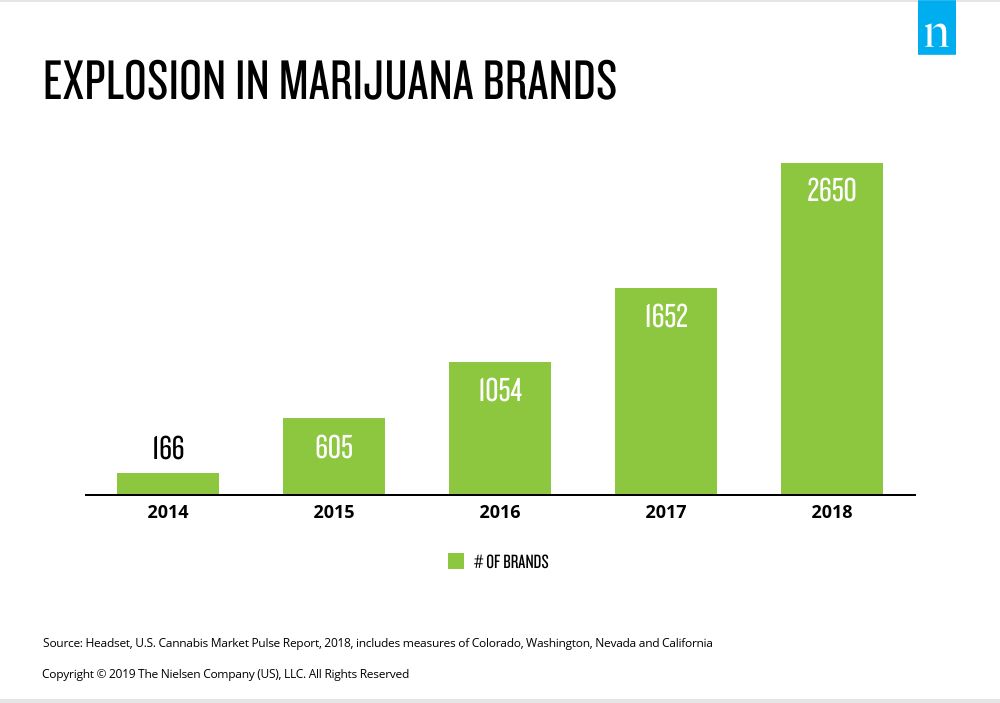 In just four years, the face of legalized recreational marijuana has changed dynamically. We forecast much of the same in the hemp-derived CBD sector, which is now invading mainstream retail and grabbing headlines along the way.

Be among those who leap ahead of the next shifts, rather than fall behind by understanding these rapidly changing trends in cannabis.

Note: All information in this article is based on measurement of sales of cannabis products in U.S. jurisdictions where such sales have been legalized. Consumer intentions captured with respect to future consumption of legal cannabis products. Information in this article should not be taken as legal advice. Readers should consult their own legal advisors.

Nielsen is a global measurement and data analytics company that provides the most complete and trusted view available of consumers and markets worldwide. Our approach marries proprietary Nielsen data with other data sources to help clients around the world understand what’s happening now, what’s happening next, and how to best act on this knowledge.

For more than 90 years Nielsen has provided data and analytics based on scientific rigor and innovation, continually developing new ways to answer the most important questions facing the media, advertising, retail and fast-moving consumer goods industries. An S&P 500 company, Nielsen has operations in over 100 countries, covering more than 90% of the world’s population.