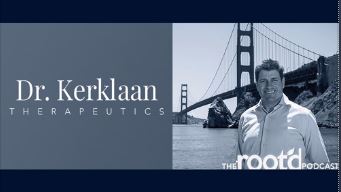 Tim Strombel interviewed Dr. Andrew Kerklaan, the founder and CEO of Dr. Kerklaan Therapeutics, in episode 36 of his Rootd podcast. The company, based in Canada, has launched several cannabis topicals into California this summer but has ambitions to be the biggest multinational cannabis topical manufacturer. The initial products target pain, sleep, PMS and skin irritation and come in several formats, including creams, sticks and sprays.

Kerklaan, a chiropractor who is the Director of Greene Avenue Complementary Health in Montreal, is guided by his desire to extend his ability to help others beyond the walls of his own practice. Patient interest in cannabis as a therapeutic option, especially for pain, his area of focus, along with the liberalizing environment in Canada provoked his interest in developing cannabis topicals.

The company has used biochemists in Canada to develop products with stability and consistency. Kerklaan is proud of the “triple-lab testing” as well as the high active ingredient concentrations. While topicals are very popular, the products created have lacked not only these features but also quality packaging. Fundraising  allowed the company to bring on strategic investors with expertise in packaged consumer goods, and Kerklaan believes that differentiated products are more likely to succeed than the more commoditized flower and extracts.

The company has a two-step process of manufacturing that allows it to add the cannabinoids separately from the initial products, which will allow it to expand beyond California into Oregon and other states. Over the next year or two, as laws change, it expects to be able to sell its products in Canada as well. The company is also developing CBD-only products which would broaden its addressable market.

Listen to the full interview: