Cannabis stocks, as measured by the Global Cannabis Stock Index,  plunged in February, more than reversing out the 10.7% gains in January by falling 26.7% to 115.33: 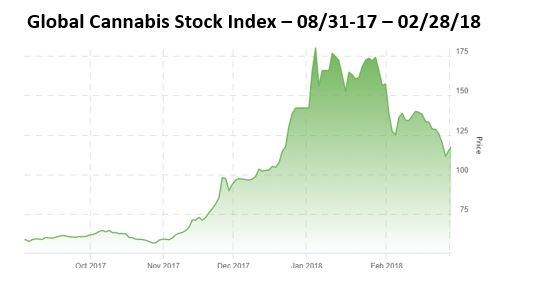 The index, which went through its last quarterly rebalancing at the end of 2017 and has 75 members that were equally weighted at the time, declined 18.8% in the first two months of the year. Despite the losses, the index is still up almost 103% since late October.

We have previously discussed the weakness in Canadian licensed producers, which comprised approximately 27% of the index at month-end. Canadian stocks in aggregate represented almost 58% of the index, with Australian stocks representing almost 7%.

Looking at the year-to-date performance, 13 names have posted positive returns, while 11 companies have lost more than half their value. The median return of the 75 names has been -27.1%.

Cannabis stocks ran into a wall early in the year after a big rally in advance of California legalizing when Attorney General Jeff Sessions rescinded the Cole Memorandum, throwing some uncertainty regarding potential federal enforcement of the Controlled Substances Act. The weakness in February coincided with the big decline in the broader market early in the month as well as the slight delay in the implementation of legal adult-use cannabis in Canada.

In the next monthly review, we will summarize the index performance and discuss the new additions and the stocks removed. You can learn more about the index members and the qualifications for inclusion by visiting the Global Cannabis Stock Index. Be sure to bookmark the page to stay current on cannabis stock price movements within the day or from day-to-day.