See definition and reconciliation of non-GAAP measures elsewhere in this release.

“The second quarter continued to be about disciplined execution and the team should be proud of the results. On a year-over-year basis, we grew revenue by 85% to $222 million; more than doubled Adjusted EBITDA to $79 million and continued to deliver positive cash flow. Since the first quarter, we closed three acquisitions, expanding our manufacturing capabilities in Massachusetts and geographic footprint into two new states, Virginia and Rhode Island. These critical steps strengthened our position to distribute our brands to more patients and consumers in existing and new markets,” said Green Thumb Chairman, Founder and Chief Executive Officer Ben Kovler. “Finding new and meaningful ways to support the communities we serve is a mission we all share at Green Thumb. We are especially proud of our recently announced Good Green grant program for heroes helping to fight problems created by the failed War on Drugs. Ahead of launching the Good Green brand of products later this year, we are allocating at least $1,300,000 in social equity grants to qualified 501(c)(3) organizations over the next 18 months to jump start this important initiative,” said Kovler.

The great American growth story in cannabis is happening–the momentum is undeniable. Consumers demand safe, reliable alternatives for well-being and we are excited to meet their needs with high-quality cannabis experiences.

There is still incredible untapped potential in all of our operating regions, and we will continue our strategy to invest in high-return initiatives that prepare us for the growth ahead and future value creation for our stakeholders.

Total revenue for the second quarter 2021 was $221.9 million, up 14.1% sequentially and up 85.4% from $119.6 million in the prior year period. Revenue growth was primarily driven by increased scale in the Consumer Packaged Goods and Retail businesses, especially in Illinois and Pennsylvania. Overall performance was driven by expanded distribution of Green Thumb’s branded products, 10 additional stores and increased traffic in the Company’s 58 open and operating retail stores.

In the second quarter of 2021, Green Thumb generated revenue from all 12 of its markets: California, Colorado, Connecticut, Florida, Illinois, Maryland, Massachusetts, Nevada, New Jersey, New York, Ohio and Pennsylvania. The Company continued to invest in expanding its cultivation and manufacturing capabilities.

Gross profit for the second quarter 2021 was $122.9 million or 55.4% of revenue compared to $63.7 million or 53.2% of revenue year-over-year. Gross margin performance was driven by increased scale in the Consumer Packaged Goods and Retail businesses.

In the second quarter 2021, EBITDA was $65.9 million or 29.7% of revenue versus $28.3 million or 23.6% of revenue in the prior year period. Adjusted Operating EBITDA, which excluded non-cash stock-based compensation of $5.7 million and other non-operating expenses of $7.7 million, was $79.3 million or 35.7% of revenue as compared to $35.4 million or 29.6% of revenue for the second quarter 2020. The significant improvement in EBITDA and Adjusted Operating EBITDA over the prior year period largely reflected revenue growth and increased scale-driven operating leverage from both the Consumer Packaged Goods and Retail businesses. For additional information on these non-GAAP financial measures, see below under “Non-GAAP Financial Information.”

On April 30, 2021, the Company issued $216.7 million of senior secured notes. The Company used the proceeds to retire its existing $105.5 million senior secured debt and for general working capital and various growth initiatives.

Green Thumb in the Community

On July 15, subsequent to quarter end, the Company announced it joined NinetyToZero along with two-time NBA MVP Steph Curry and a group of leading CEOs and organizations to combat the 90% racial wealth gap between white and black Americans. Through NinetyToZero, leaders and organizations across all sectors of our nation’s economy are moving together on a set of expert-driven, needle-moving actions to advance racial equity by growing black talent and increasing capital to black businesses. NinetyToZero provides a roadmap for companies and organizations to drive immediate change while acting as an engine for continued learning and growth through its research partnership with The Wharton School of The University of Pennsylvania to develop and share best practices.

On July 21, subsequent to quarter end, the Company announced plans to launch Good Green, a line of cannabis products dedicated to making impactful investments in organizations working to correct the harms created by the War on Drugs, funded by sales of the plant that started it all. Green Thumb is allocating at least $1,300,000 in social equity grants via Good Green over the next 18 months. Grant applications are now open to nonprofits supporting the brand’s three pillars: education, employment and expungement. Applications and additional information are available at www.good.green.

On July 29, subsequent to quarter end, Green Thumb launched the application process for previously announced LEAP New Business Accelerator. The LEAP incubation program is intended to help Illinois social equity licensees not only operationalize their licenses but also ensure their success through mentorship and guidance from the Green Thumb team. Applications are open through August 31, 2021. Green Thumb will loan a total of at least $1 million to the winning applicants. Applications and additional information are available at http://www.gtigrows.com/LEAP.

Green Thumb is proud to be named Number Two of Crain’s Fast 50 list of rapidly growing companies in Chicago.

Green Thumb will host a conference call on Wednesday, August 11, 2021, at 5:00 pm ET to discuss its second quarter 2021 financial results for the quarter ended June 30, 2021. The earnings call may be accessed by dialing 866-777-2509 (toll-free) or 412-317-5413 (International) with conference ID: 10157973. A live audio webcast of the call will also be available on the Investor Relations section of Green Thumb’s website at https://investors.gtigrows.com and will be archived for replay.

Green Thumb Industries Inc. (“Green Thumb”), a national cannabis consumer packaged goods company and retailer, promotes well-being through the power of cannabis while giving back to the communities in which it serves. Green Thumb manufactures and distributes a portfolio of branded cannabis products including Beboe, Dogwalkers, Dr. Solomon’s, incredibles, Rythm and The Feel Collection. The company also owns and operates rapidly growing national retail cannabis stores called Rise Dispensaries. Headquartered in Chicago, Illinois, Green Thumb has 16 manufacturing facilities, licenses for 111 retail locations and operations across 14 U.S. markets. Established in 2014, Green Thumb employs over 3,000 people and serves thousands of patients and customers each year. The company was named to Crain’s Fast 50 list in 2021 and a Best Workplace by MG Retailer magazine in 2018 and 2019. More information is available at www.GTIgrows.com.

In March 2020, the World Health Organization categorized coronavirus disease 2019 (together with its variants, “COVID-19”) as a pandemic. COVID-19 continues to spread throughout the U.S. and other countries across the world, and the duration and severity of its effects are currently unknown. The Company continues to implement and evaluate actions to strengthen its financial position and support the continuity of its business and operations in the face of this pandemic and other events. The Company’s condensed consolidated financial statements presented herein reflect estimates and assumptions made by management that affect the reported amounts of assets and liabilities and disclosure of contingent assets and liabilities at the date of the condensed consolidated financial statements and reported amounts of revenue and expenses during the periods presented. Such estimates and assumptions affect, among other things, the Company’s goodwill; long-lived assets and intangible assets; operating lease right of use assets and operating lease liabilities; assessment of the annual effective tax rate; valuation of deferred income taxes; the allowance for doubtful accounts; assessment of the Company’s lease and non-lease contract expenses; and measurement of compensation cost for bonus and other compensation plans. While the Company’s revenue, gross profit and operating income were not impacted during first three months of 2021, the uncertain nature of the spread of COVID-19 and the uncertainty of the impact of nationwide vaccine programs, may impact the Company’s business operations for reasons including the potential quarantine of the Company’s employees or those of the Company’s supply chain partners, and the Company’s continued designation as an “essential” business in states where the Company does business that currently or in the future impose restrictions on business operations. The carrying value of the Company’s goodwill and other long-lived assets may change in future periods as the expected impacts from COVID-19 are revised, resulting in further potential impacts to the Company’s financial statements.

The Canadian Securities Exchange does not accept responsibility for the adequacy or accuracy of this release. 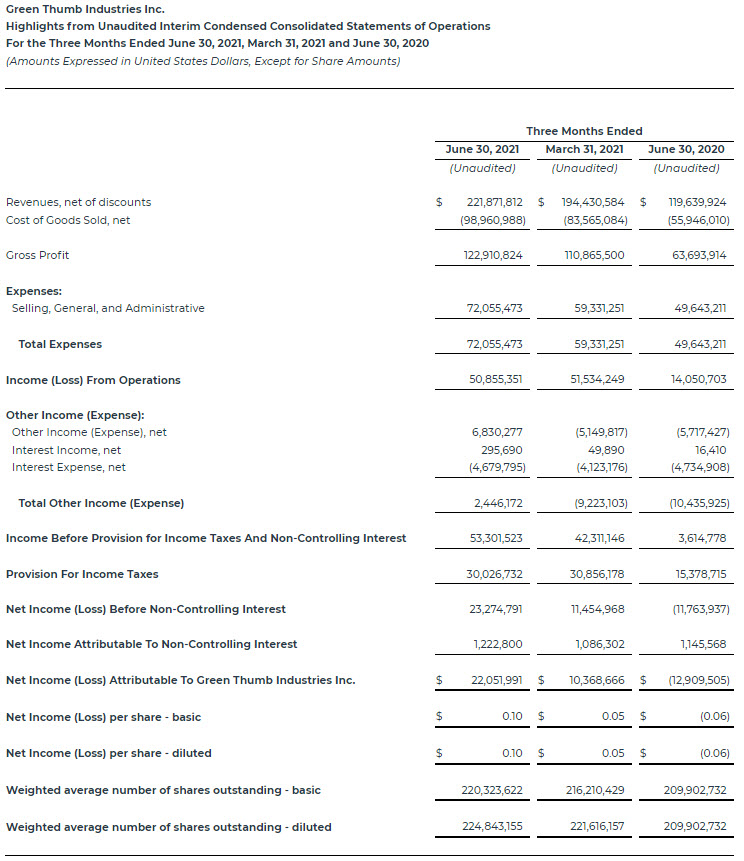 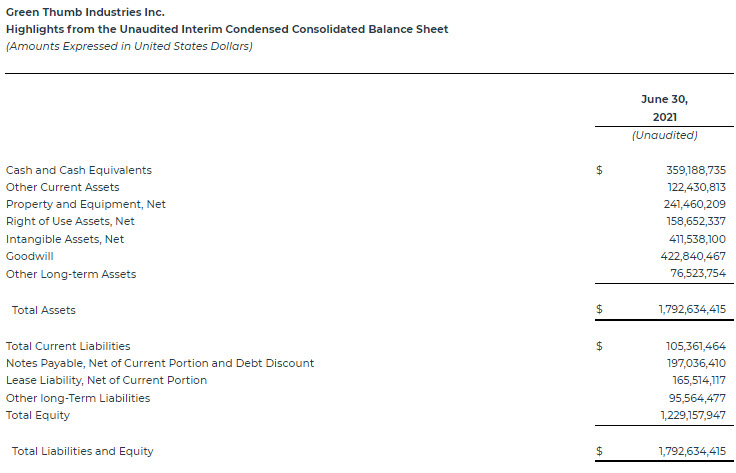 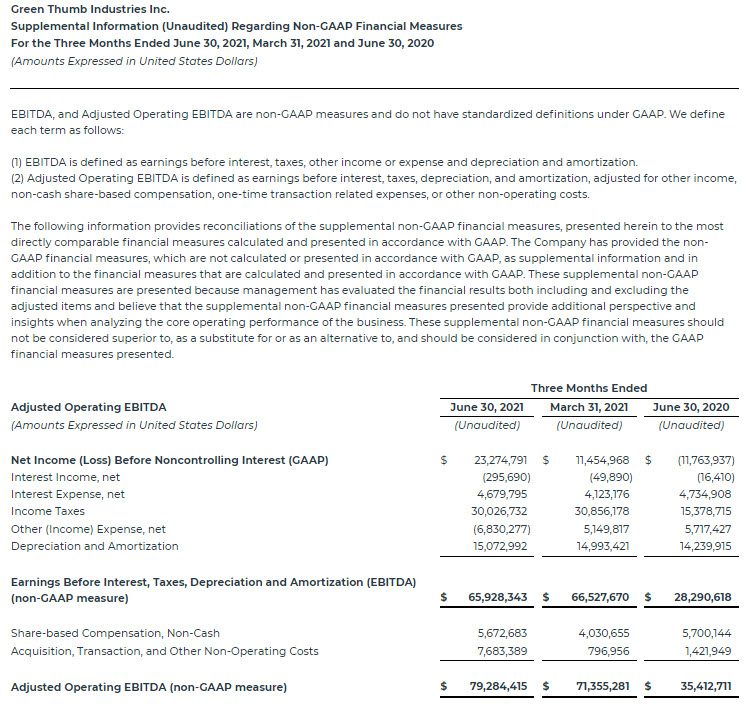