Highlights for the third quarter and nine months ended September 30, 2022:

See definitions and reconciliation of non-GAAP measures elsewhere in this release.

“We are proud to report record revenue and Adjusted Operating EBITDA for the quarter against a backdrop of higher inflation and greater economic uncertainty. Revenue increased 12% year-over-year and 3% sequentially to $261 million. We had positive GAAP net income for the ninth consecutive quarter of $10 million or $0.04 per diluted share. Adjusted Operating EBITDA grew 7% sequentially to $84 million, or 32% of revenue for the quarter. Finally, the business generated strong cash flow from operations, totaling $48 million for the quarter,” said Green Thumb Founder, Chairman and Chief Executive Officer Ben Kovler.

As we near the end of 2022, we are optimistic about the future of the U.S. cannabis market and proud of Green Thumb’s leadership position in the industry. We continue to think about what is best for the American consumer, as demonstrated by the recent announcement of our plans to launch RISE Express medical dispensaries adjacent to Circle K locations in Florida.

Looking ahead, our focus remains on execution, maintaining a strong balance sheet and making strategic investments in markets that will generate strong returns for our stakeholders over time.

Total revenue for the third quarter of 2022 was $261.2 million, up 2.7% sequentially and up 11.8% from $233.7 million in the prior year period. Revenue growth was primarily driven by increased retail sales in New Jersey, reflecting the legalization of adult-use cannabis, increased retail sales in Illinois, 12 additional retail locations versus third quarter last year, and increased traffic in the Company’s 77 open and operating retail stores.

Gross profit for the third quarter of 2022 was $131.2 million or 50.2% of revenue compared to $129.5 million or 55.4% of revenue in the comparable period last year. Gross profit performance reflected increased sales in the Company’s retail business, new and acquired stores, New Jersey adult-use sales and continued growth in the Illinois market.

Total selling, general and administrative expenses for the third quarter were $82.5 million or 31.6% of revenue, compared to $71.4 million or 30.6% of revenue for the third quarter 2021. The increase in total expenses was attributable to retail salaries and benefits, intangible amortization expense and other operational and facility expenses primarily due to an increase in the Company’s store base.

Net income attributable to the Company for the third quarter of 2022 was $9.8 million or $0.04 per basic and diluted share, compared to a net income of $20.2 million, or income of $0.09 per basic and $0.08 per diluted share in the prior year period. The reduction in net income of $10.4 million was primarily due to favorable fair value adjustments to the Company’s warrant liability as reflected within other income (expense), net, during the comparable period in the prior year.

For additional information on these non-GAAP financial measures, see below under “Non-GAAP Financial Information.”

On July 14, 2022, Green Thumb announced it exercised its right to extend the maturity date of its senior non-brokered debt by one year, from April 30, 2024 to April 30, 2025. The Company’s senior secured notes (the “Notes”), which have a total principal amount of approximately $250 million, bear interest at a rate of 7.0% per annum that is paid quarterly. The extended maturity date did not involve any amendments to the Notes or any additional consideration to the existing lenders.

Green Thumb in the Community

On August 25, 2022, the Company announced that RISE Dispensaries will serve as a premier sponsor of HeadCount’s Cannabis Voter Project, which aims to register and inform voters who support cannabis policy reform. Leading up to this year’s midterm elections, HeadCount and RISE Dispensaries have been teaming up to encourage voters to “Roll Up to the Polls” through Cannabis Voter Project resources now available at all RISE-branded locations and online at www.headcount.org/rise.

Green Thumb will host a conference call on Wednesday, November 2, 2022, at 5:00 pm ET to discuss its third quarter 2022 financial results for the quarter ended September 30, 2022. The earnings call may be accessed by dialing 844-883-3895 (Toll-Free) or 412-317-5797 (International). A live audio webcast of the call will also be available on the Investor Relations section of Green Thumb’s website at https://investors.gtigrows.com and will be archived for replay.

Green Thumb Industries Inc. (“Green Thumb”), a national cannabis consumer packaged goods company and retailer, promotes well-being through the power of cannabis while giving back to the communities in which it serves. Green Thumb manufactures and distributes a portfolio of branded cannabis products including &Shine, Beboe, Dogwalkers, Doctor Solomon’s, Good Green, incredibles and RYTHM. The company also owns and operates rapidly growing national retail cannabis stores called RISE. Headquartered in Chicago, Illinois, Green Thumb has 17 manufacturing facilities, 77 open retail locations and operations across 15 U.S. markets. Established in 2014, Green Thumb employs approximately 3,800 people and serves millions of patients and customers each year. The company was named to Crain’s Chicago Business Fast 50 list in 2021 and 2022 and a Best Workplace by MG Retailer magazine in 2018, 2019 and 2021. More information is available at www.gtigrows.com. 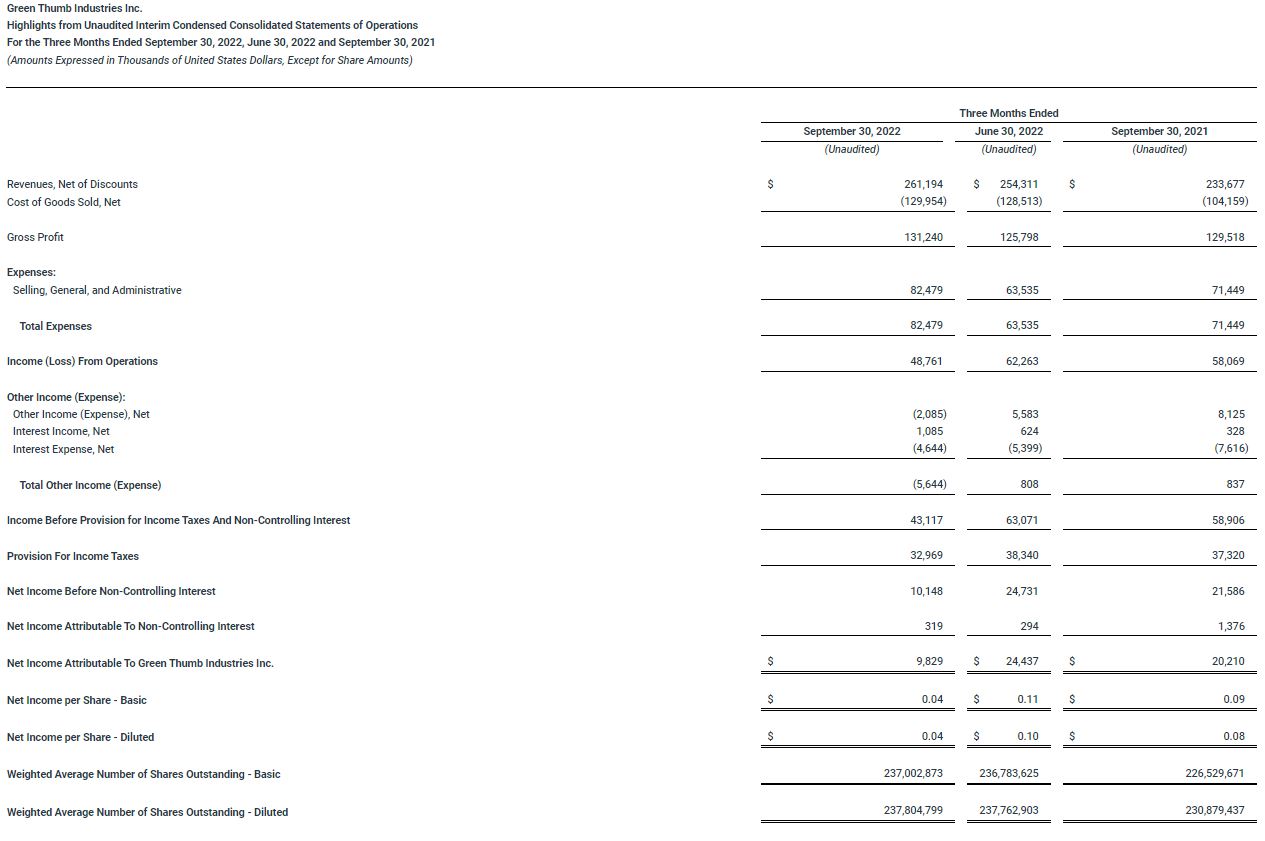