TORONTO, Feb. 2, 2022 /CNW/ – Concerned Shareholder, Adam Arviv, through his fund KAOS Capital Ltd. (the “Concerned Shareholder” or “Arviv”), announces today that he plans to nominate five new independent directors at HEXO Corp. (“HEXO” or the “Company”) with a goal of replacing the majority of the currently entrenched legacy HEXO Board members and turning around the underachieving Company’s disappointing performance.

Arviv, who currently owns an approximate 2% stake in HEXO, has been waging a battle with management at the cannabis company over the past months, since the Company’s August 2021 acquisition of Licensed Producer, Redecan. Arviv alleges that former Chair Dr. Michael Munzar and former CEO Sebastien St-Louis deceived the Redecan group of investors and destroyed shareholder value by completing a number of destructive financings and that the incumbent Board of Directors, led by current Board Chair John Bell and Director Vincent Chiara, was grossly remiss in approving these transactions.

As of the date of this letter, HEXO common shares (“Shares”) are trading at a 52-week low of C$0.58, down from a high of C$14.00, within the span of one year. The departure of Mr. St-Louis with immediate effect on October 18, 2021, was not sufficient to halt the precipitous slide in Share value, with HEXO Shares plummeting more than 50 percent since that day. Even the lift in Canadian cannabis stock performance this week has had little effect on the feeble HEXO Share value.

The incumbent Board has demonstrated a notable lack of understanding of capital markets, as evidenced by a number of key missteps and errors over the past months:

This has to stop. The market has spoken loudly and HEXO shareholders have made it clear that they have no confidence in the direction of the Company and in the ability of the incumbent Board to right the ship and reverse the downward slide. Without monumental change, HEXO Shares will continue their unrelenting descent.

Shareholders of HEXO deserve leadership that can deliver a tangible future. Despite the necessary removal of Mr. St-Louis, it is very clear that to reverse course, the majority of the Board needs to be replaced with new, independent Directors who have the experience and expertise to successfully navigate back to exceptional performance. Only in this way will we unlock the massive Shareholder value that is trapped in HEXO.

Arviv will submit the names of five independent nominees to replace the majority of the incumbent Board members at the upcoming annual and special meeting of shareholders (the “Meeting”) scheduled for March 8, 2022.  Arviv believes he will have significant support from Shareholders. Subsequent to winning the shareholder vote, the new Board will immediately establish an Independent Special Committee to evaluate all paths to effecting a positive resolution for all stakeholders.

The five new, highly qualified and independent director nominees (the “Nominees”) are as follows:

Adam Arviv is currently the Chief Executive Officer of KAOS Capital Ltd. and a Strategic Advisor for ORYX Gaming. Previously, Mr. Arviv served as the Founder, Chief Executive Officer and a director of Bragg Gaming Group Inc., a publicly-traded company on the TSX, and President of Will-Power Management Inc. He was also the co-founder of Gaming Nation Inc., Green Growth Brands and the BRN Group. Mr. Arviv also serves as a Chairman on a number of boards, including, GhostRetail, the BRN Group, and Legacy Eight Gaming. Mr. Arviv holds a Bachelor of Economics from The University of Western Ontario.

Mark Attanasio is currently a director of Nocera Investment Corp, a private investment fund focused on high growth venture companies. Mr. Attanasio also serves a director of GhostRetail. Mr. Attanasio began his career as a Chartered Accountant and spent four years at PricewaterhouseCoopers LLP in Audit and Advisory Services. He spent 11 years at National Bank Financial, starting in the M&A group, then serving four years as Director of Global Equity Derivatives, where he managed a proprietary trading portfolio of bank capital. In 2014, he was hired by Dundee Corporation as Executive Vice President, Merchant Banking, overseeing a portfolio of investments in multiple sectors. From there, he was appointed President of Dundee Capital Markets, where he managed all aspects of the capital markets business. Mark then led a management buyout of Dundee Capital Markets and became co-founder and CEO of Eight Capital, formerly known as Dundee Capital Markets. Mark Attanasio graduated from the University of British Columbia with a Bachelor’s degree in Science. He holds the CA and CPA accountancy designations.

Craig Bromell currently serves as the President of The Building Union of Canada, a construction union. Mr. Bromell previously served as Chief of Security & Intelligence at 3 Sixty Risk Solutions Ltd., a security service provider to the cannabis sector. Prior to these roles, Mr. Bromell served the Toronto Police Service for 26 years, which included six years as Chief Steward 51 Division and six years as President of the 7,500 member Toronto Police Association. During more than a quarter century of service Bromell also became the Director of the National Association Professional Police (17,000 members) and Director of the Canadian Police Association (25,000 members). As Toronto Police Association President, Bromell negotiated three bargaining contracts for his 7,500 members totaling 24% in raises with dramatic improvements to pension and medical packages. After his retirement Bromell was inducted into the Canadian Police Association’s Hall of Honour, a prestigious honour shared with only a select number of other Veterans of Law Enforcement.

Rob Godfrey is currently the President of Brown Lab Industries Inc., a consulting and property management company, and the President and CEO of Vector Health Labs, a laboratory services company. Mr. Godfrey also serves as a director of Bragg Gaming Group Inc., a publicly-traded company on the TSX and as Chairman of Kings Entertainment Group Inc., a publicly-traded company on the CSE. Mr. Godfrey oversees two portfolio companies: Qwatro USA and UrbanDog Holdings. In addition, Mr. Godfrey is active in Brown Lab’s real estate activities including the management of commercial and industrial properties in Ajax, Etobicoke and Toronto. Mr. Godfrey’s previous work experience includes Senior Vice President of the Toronto Blue Jays Baseball Club, President of the Toronto Phantoms Arena Football Team and Associate at TD Securities. Mr. Godfrey holds a BA from the University of Western Ontario, and a JD/MBA from Pepperdine University in California.

Aidan Rasalingam currently serves as the Executive Vice President of Retail at Canyon Cannabis, a licensed cannabis retailer in Ontario. Aidan understands the role of government in regulated industry with knowledge gained working in the offices of senior parliamentarians in Ottawa. He has also worked with a government relations firm in licencing of Cannabis facilities and brings an expertise on the interplay between federal and provincial regulations on consumer issues.  During his tenure in government affairs, he has also worked with multi stakeholder groups on industry issues.

The Concerned Shareholder reserves its right to nominate additional directors in accordance with applicable securities and corporate law.

The following table contains information regarding each proposed Nominee’s name, age, province and country of residence, present occupation and principal occupations for the preceding five years, and the number of Shares of the Company beneficially owned, or controlled or directed, directly or indirectly, by such Nominee: 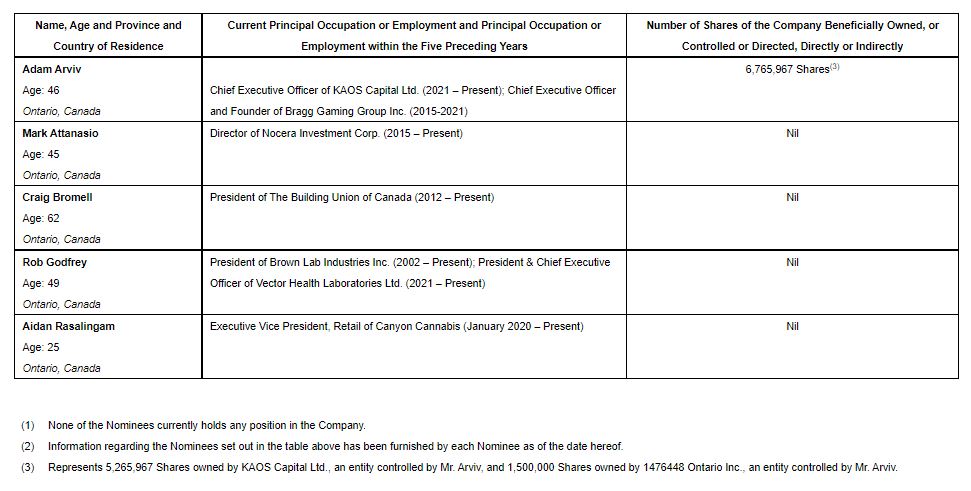 Based on information provided by each respective Nominee, none of the Nominees or their respective associates or affiliates has: (a) any material interest, direct or indirect, in any transaction since the commencement of the Company’s most recently completed financial year or in any proposed transaction which has materially affected or would materially affect the Company or any of its subsidiaries; or (b) any material interest, direct or indirect, by way of beneficial ownership of securities or otherwise, in any matter to be acted on at the Meeting, other than the election of directors.

Information about the Concerned Shareholder

As of the date hereof, the Concerned Shareholder beneficially owns, or exercises control or direction, directly or indirectly, over, 6,765,967 Shares.

The Concerned Shareholder has not, within the preceding ten years of the date hereof, been a “dissident”, as such term is defined in Ontario Reg. 62 – General under the Business Corporations Act (Ontario).

Neither the Concerned Shareholder nor, to the Concerned Shareholder’s knowledge, any of its associates or affiliates, has (a) any material interest, direct or indirect, in any transaction since the commencement of the Company’s most recently completed financial year or in any proposed transaction which has materially affected or would materially affect the Company or any of its subsidiaries; or (b) any material interest, direct or indirect, by way of beneficial ownership of securities or otherwise, in any matter to be acted on at the Meeting, other than the election of directors.

From headquarters in New York and London, and offices and partners in major capital markets, Morrow Sodali serves more than 700 corporate clients in 40 countries, including many of the world’s largest multinational corporations. In addition to listed and private companies, its clients include mutual funds, ETFs, stock exchanges and membership associations.

The information contained in this press release does not and is not meant to constitute a solicitation of a proxy within the meaning of applicable securities laws. Although the Concerned Shareholder has approached the Nominees for election to the Company’s board of directors at the Meeting of Shareholder, the record date for the Meeting has not yet occurred and Shareholder are not being asked at this time to execute a proxy in favour of any matter. In connection with the Meeting, the Concerned Shareholder may file a dissident information circular in due course in compliance with applicable securities laws.

Notwithstanding the foregoing, the Concerned Shareholder is voluntarily providing the disclosure required under section 9.2(4) of National Instrument 51‐102 – Continuous Disclosure Obligations in accordance with securities laws applicable to public broadcast solicitations.

The registered address of HEXO Corp. is located at 120 de la Rive Road, Gatineau, Quebec. A copy of this press release may be obtained on HEXO’s SEDAR profile at www.sedar.com.