Hightimes Holdings, which continues to pursue a Reg A+ offering with the goal of selling up to $50 million in stock at $11 per share and then, hopefully, trading publicly, issued an annual report Form 1-K for 2017 that should give potential investors pause.  The company reported a modest decline in sales, a large decline in gross profit, substantially higher operating expenses and, consequently, an operating loss that expanded 385% to $13.6 million. 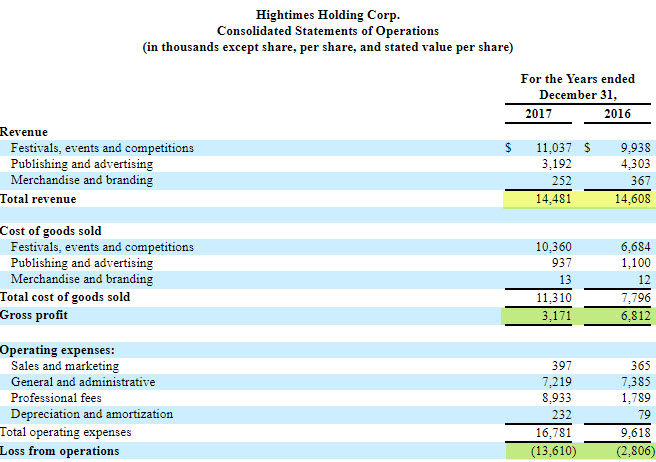 Sales declined by 0.9%, with U.S. revenue decreasing 4.3%. While the event business grew 11.1%, the company experienced a 25.8% decline in publishing and advertising sales and a 31.3% decline in merchandising and branding. The large decline in the gross margin, from 46.6% to 21.9%, was due to the gross margin on events falling from 32.7% to just 6.1%. Included in operating costs, which grew 74.5%, were stock compensation expenses of $6.689 million. Even excluding these non-cash charges, operating expenses would have grown by 4.9%. Operating cash flow for the full year was -$7.67 million, a substantial decline from the -$1.45 million use of cash in 2016.

The balance sheet continues to be strained, with year-end reported cash at only $118,000. Total assets of $4.07 million were dwarfed by liabilities of $53.524 million, $32.524 million of which is due in 2018. The company included a pro-forma balance sheet that added $6.75 million in intangible assets and reduced liabilities by over $29 million, leaving the company with equity of -$13.63 million. The changes, which adjust for convertible note conversions and an acquisition, also boost the outstanding share-count from 19.05 million to 22.58 million.

The company didn’t provide financials for the 4th quarter, but, backing out the numbers by comparing the prospectus from last year, which included  year-to-date results through Q3, with this one, it is clear that Q4 was very weak. Total sales were just $2.02 million for the quarter, a decline of 8.7% from a year ago, with an operating loss of $4.2 million. During Q4, Hightimes Holdings used $2.915 million to fund its operations.

As far as the capital raise, the company had filed a Form 1-U on March 30th indicating that it had not yet begun to sell securities. Hightimes Holdings has engaged NMS Capital as Selling Agent. The final offering circular, which was the 4th amendment to the original Form 1-A, qualified with the SEC on March 12th. The company intends to commence sales on or before April 15th, the original termination date. It has the right to extend the termination by 90 days. The pending acquisition by Origo Acquisition Corp (OTC: OACQF) must be completed by June 12th, or that door will close. According to the 1-K:

Origo was already delisted from the NASDAQ, where it traded previously until February, closing the door to the NASDAQ solely through the merger. With weak financials, the clock ticking and the need to raise money quickly, it’s not clear that Hightimes Holdings is going to make it to the public markets, especially to the NASDAQ as it originally intended. Even if it succeeds, the valuation at $11 per share, if they are able to raise the entire $43 million net after expenses, would be $330 million, or almost 23 times the 2017 sales that generated a substantial operating loss, assuming they don’t merge with Origo but remain independent.

Finally, investors should be aware that Hightimes Holdings recently sold 185,362 shares in 2018 at approximately $6.87, a 37.5% discount to the $11 offering price it is seeking in the public offering.