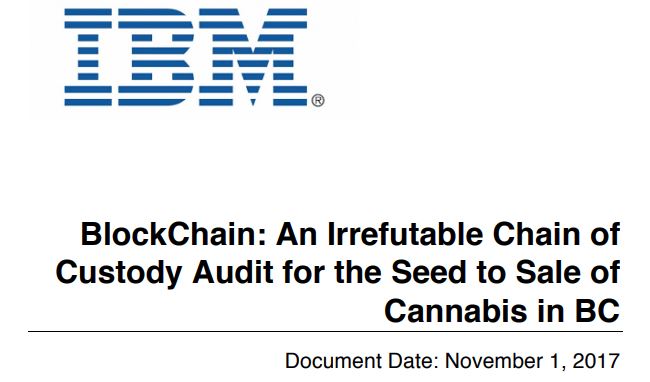 Coindesk, which covers blockchain news, found a nugget in a stack of documents submitted to the government of British Columbia. The provincial government’s BC Cannabis Regulation Engagement committee invited stakeholders to submit proposals by November 1, and it received over 130 suggestions on how to implement legal cannabis in 2018. The province was seeking input on issues that included minimum age, personal possession limits, public consumption, drug-impaired driving, personal cultivation and distribution and retail models, all topics that were covered in a discussion paper it issued previously.

One of the more interesting submissions is a three-page proposal from IBM (NYSE: IBM) endorsing the use of blockchain as part of the seed to sale tracking solution to exert regulatory control. The company suggests that it can help reduce or eliminate black market sales by allowing BC to control the sourcing, selling and pricing of products, assist producers with real-time inventory management and help retailers identify supply/demand gaps. According to the proposal:

The Blockchain shared ledger is updated and validated in real time with each network participant. This enables equal visibility of activities and reveals where an asset/product is at any point in time, who owns it and what condition or state it is in. This type of transparency would bring a new level of visibility and control to the provincial regulators and provide assurance to the multitude of cautious stakeholders regarding the way the management of a cannabis supply chain is rolled out within British Columbia.

Blockchain technology is likely to play an important role in the highly regulated cannabis industry, and having a large multinational company pushing its adoption will likely validate it further. In the United States, Tokken has been working on blockchain solutions that have been implemented and include payment solutions that address the issues that have led to the country’s cannabis transactions being conducted primarily in cash.