Last week, Leafly, which bills itself as the “world’s largest cannabis information resource,” suddenly locked out developers in the cannabis industry from its application program interface (API).  The API gave access to data that includes Leafly’s extensive list of strain, product and location data, including 1000 strains and 2000 locations worldwide backed up by over 150,000 user-generated reviews, according to the company. The news hasn’t been reported widely, but Leafly acknowledged the situation on Twitter: 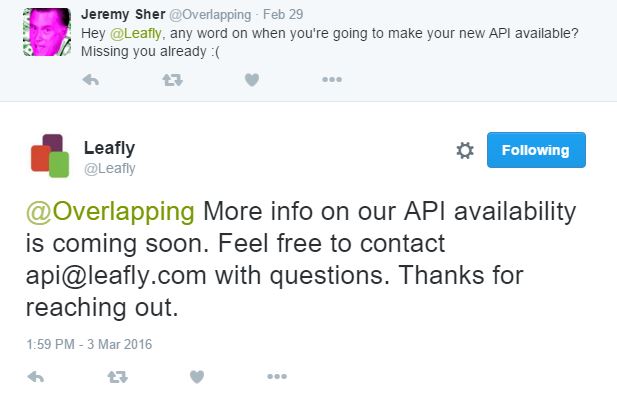 On February 29th, 2016, access to the Leafly API was officially terminated for many developers. Throughout the month of February, Cannabis Reports saw a huge increase in the number of requests for API keys. In fact, it was during discussions with our developer network that we discovered Leafly data is now unavailable to them.

We reached out to Cannabis Reports CEO David Drake in order to better understand the situation.  In the interview, which is posted below, Drake discusses how he believes that Leafly pulled the rug out from everyone in the industry.  Helpful services that have been built upon the Leafly API data that find themselves shut down have struggled to understand the reason for the shutdown or when (if) it might return.  He has seen many customers embrace the Cannabis Reports API consequently.  Drake speculated that a new partnership with a CRM company may be behind the unannounced move and is highly critical of the company, suggesting that an “MBA attitude” may underscore its actions.

Cannabis Reports, which intends to create a non-profit to be in charge of the data and assure its constant availability, has posted tips on how to migrate from the Leafly API.