Leafly, one of the three core holdings of Privateer Holdings, has moved forward since the departure of founder Cy Scott, who left last year to form Headset. At the recent Cannabis Collaborative Conference in Portland, Paul Campbell, who is Vice President of Marketing, was part of a panel: “Sidekicks are Superheroes: Ancillary & Supporting Businesses within the Cannabis Marketplace.”  Holly Alberti of Healthy Headie Lifestyle, Brandon Gallagher of Vuber Technologies and Scott Lott of Click Simply were also on the panel, which was moderated by David Rheins of the MJBA and took place on February 3rd.  Ganjapreneur posted a video of the full discussion.

Campbell, pointing to the 8mm monthly visitors, said that Leafly is now the largest cannabis website. The vast majority of the 50 or so employees are based in Seattle.  75% of the visitors are from the United States, but the website has been seeing increased visits from Europe.

While the company was initially focused on serving as the leading resource on cannabis strains, it bills itself now as the “world’s largest cannabis information resource” and has launched a products showcase that includes both accessories and branded cannabis products: 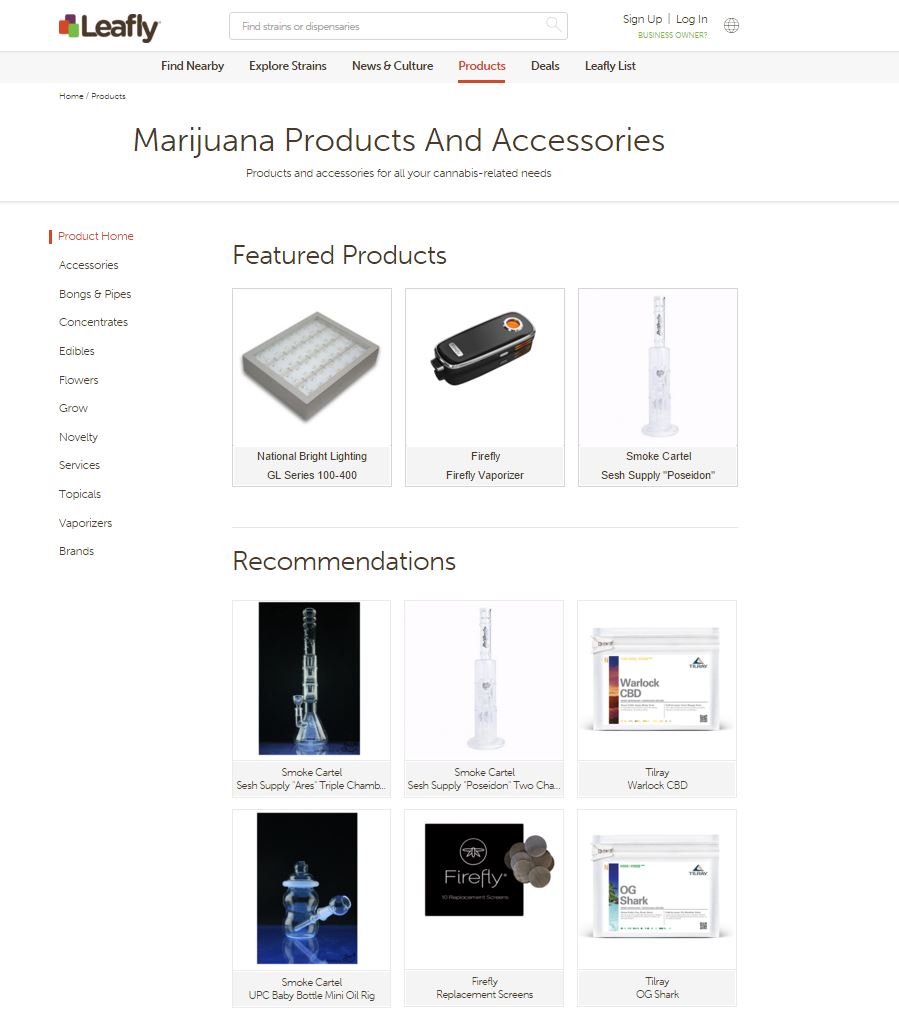 Leafly has also beefed up its content development, with priorities of improving consumer education and adding business-focused content such as business insights and data analytics.  The company hired Samuel Martin, who was previously a Senior Content Manager at Time, Inc., as Managing Editor. It also added journalist Bruce Barcott, who authored “Weed The People: The Future of Legal Marijuana in America,” as Deputy Editor. Barcott has elevated the business-oriented content with articles like his recent interview with Leslie Bocskor of Electrum Partners.

Leafly made history when it took out a full-page ad in the New York Times in 2014, and now it is trying to address the substantial challenges that cannabis businesses face in marketing.  The company has done multi-market billboard campaigns and has worked with Clear Channel on radio ads.  For its clients, Leafly offers the option of posting advertorials.  65% of its traffic now comes from mobile, many of whom are ready to buy.  Campbell explained that a $5000 targeted ad buy on the site generated $50K in sales for a company that makes storage products.

With its large audience, Leafly has the opportunity to elevate the cannabis industry and appears to be moving in the right direction.   Leafly filled a big void with its initial focus in terms of educating consumers, and now it is helping businesses connect with their target audiences. With its backing by the deep-pocketed Privateer Holdings, we should expect more innovation ahead.