Leafly’s Bruce Barcott and Beau Whitney of Whitney Economics have published a detailed look at cannabis job growth, Special Report: Cannabis Jobs Count. The report breaks down the 296,000 jobs across the country as being part of either the direct and indirect cannabis industry and also includes what the authors call “induced” jobs, which are local community jobs supported by wages spent by cannabis employees. Direct jobs alone represent over 211,000, according to the report.

The fastest growing state for cannabis jobs in 2018 was Florida, which added over 9000. Here are the top states ranked by jobs added over the past year: 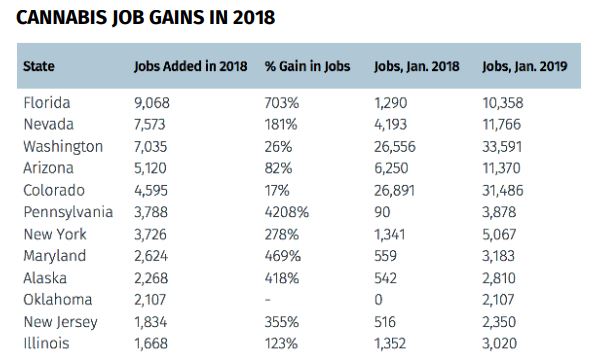 Leafly predicts that the states with the largest number of job additions in 2019 will include California, Massachusetts, Florida, Oklahoma and Arkansas, providing estimates for each of them.

The report also includes an Appendix, which lists cannabis jobs state-by-state, breaking them down by direct, indirect and induced and also providing individual market data.

Ancillary Cannabis Stocks Continue to Underperform With 4% Decline in February