In a new 5-part series here on the Cannabiz Media blog, we’ll be diving into the data in the Cannabiz Media License Database to learn what’s happening in California now that we’re a couple of months into the state’s adult-use marijuana industry launch. As the fourth largest economy in the world and with an adult population of over 23.1 million people, the California marijuana market is expected to grow to $7 billion. Let’s see what’s been happening since January 1, 2018.

The rules and regulations of the California marijuana industry are issued by three different agencies:

With the launch of the adult-use marijuana industry in California, the percentage of licenses issued by each agency has changed. In January, the Bureau of Cannabis Control had issued the most licenses (49%), but now, the agency is only responsible for 35% of the issued licenses. On the other hand, the Department of Food and Agriculture had issued 27% of licenses in January, but now, that percentage has grown to 49%. The percentage of licenses issued by the Department of Public Health has decreased since January from 24% to 16% currently. 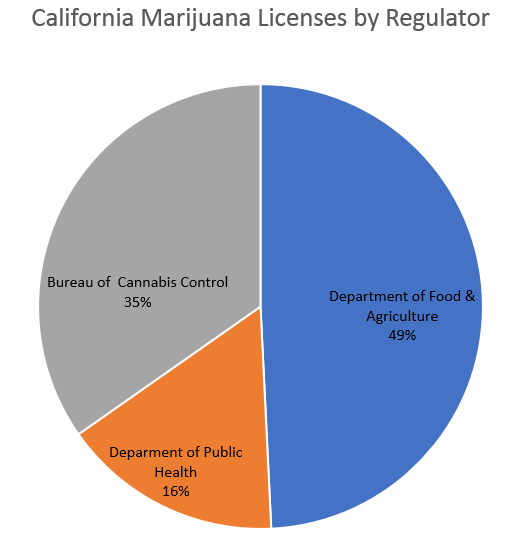 With three different agencies involved in creating rules and regulations for California’s marijuana industry, there is a great deal of regulatory complexity that companies trying to get licenses have to navigate through. The barriers to entry are high in California, and those companies with strong regulatory expertise, lawyers, and consultants (i.e., companies that have money to pay for this expertise) will likely fare best under this scheme.

Cannabiz Media is tracking over 3,500 marijuana licenses in California. At the end of January 2018, just over 2,000 California licenses were being tracked, so the number of licenses in the state is increasing quickly. California now has more active licenses than any other state, and they’ve been issuing licenses for fewer than 90 days. 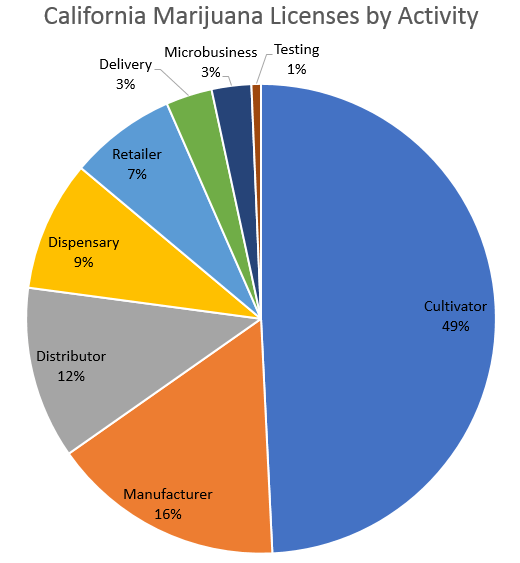 Reviewing the data in the Cannabiz Media Licensing Database revealed some interesting facts about California marijuana licenses that help to paint the picture of how the state’s marijuana marketplace is developing. Here are some of those key facts:

Based on these facts, it’s clear that a few areas in California are becoming marijuana hot beds and a small number of companies are positioned to dominate the industry.

Stay tuned to the Cannabiz Media blog for Part 2 of the Marijuana Licenses in California series. In that post, we’ll dive into cultivation licenses.