LOS ANGELES, August 13, 2019–(BUSINESS WIRE)–MedMen Enterprises Inc. (CSE: MMEN) (OTCQX: MMNFF) (“MedMen” or the “Company”), a leading cannabis retailer with operations across the U.S., today announced unaudited systemwide revenue figures for the fiscal fourth quarter 2019, which ended on June 29, 2019. The Company also provided an update on several corporate initiatives, including efforts to optimize SG&A and raise capital, the status of the pending PharmaCann transaction and retail store expansion. The Company plans to announce financial results for Fiscal 2019 after market close on October 28, 2019.

Q4 2019 was another quarter of solid execution for MedMen and a very strong end to our fiscal year. Throughout 2019, we broadened our geographic footprint through strategic acquisitions, which leverage our existing corporate infrastructure as we enter new markets.

Following the closing of pending acquisitions, we will be licensed for up to 92 retail locations across 12 states, and there is tremendous opportunity ahead to turn the balance of our retail licenses into revenue-generating storefronts.

For the fiscal fourth quarter 2019, systemwide revenue across MedMen’s operations in California, Nevada, New York, Arizona and Illinois, excluding pending acquisitions, totaled US$42.0 million (CA$55.5 million), up 15% sequentially. This growth represents the Company’s third consecutive double-digit sequential revenue increase since going public in May 2018. For the fourth quarter, gross margins across retail operations were 50%, compared to 51% in the previous quarter. Pro forma systemwide revenue, which includes pending acquisitions that have not yet closed, totaled US$61.3 million (CA$81.0 million) for the quarter. This pro forma revenue figure is based on 37 retail stores that were operational at the end of the quarter and includes the recently announced pending acquisitions of operational retailers in Long Beach, California and Vallejo, California.

MedMen’s stores in California’s recreational market continue to perform well quarter over quarter. The Company’s 11 operational retail locations in California reported a combined US$27.4 million (CA$36.2 million) in revenue for the fourth quarter, an increase of 10% sequentially. Revenue by quarter for Fiscal 2019 is summarized in the table below. 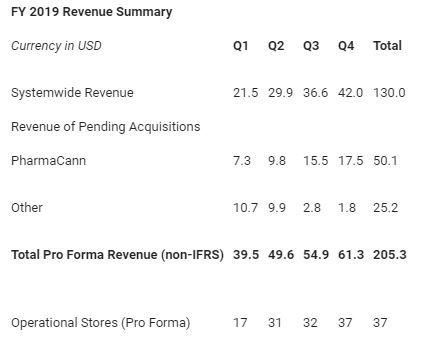 Based on preliminary figures for the fourth quarter 2019 and subsequent initiatives in fiscal first quarter of 2020, MedMen expects to significantly surpass the targeted 20 percent reduction in its corporate SG&A expenses from its quarter ending December 2018, which totaled US$164 million on an annualized basis. The Company is now on track to reduce its run-rate corporate SG&A expenses by 30 percent by the end of the September 2019 quarter, or to approximately US$115 million on an annualized basis going forward. Key drivers of this continued decrease in corporate SG&A expenses include: i) general corporate cost savings, ii) strategic headcount reductions across various departments and iii) elimination of non-core functions and overhead in various departments.

MedMen has completed the previously announced amendments to its US$250 million senior secured credit facility arranged by Gotham Green Partners (the “Facility”). These amendments offer the Company greater access to capital by providing MedMen the ability to draw down the full remaining balance of the Facility without any trading price hurdles. The amendments also make changes to certain financial covenants under the Facility, providing MedMen further flexibility in managing its balance sheet and growth initiatives.

MedMen has also executed definitive subscription documentation for its non-brokered offering of subordinate voting shares for aggregate gross proceeds of US$30 million (the “Equity Placement”) at a price per share of US$2.05 with the subscribers, Wicklow Capital and Gotham Green Partners. Closing of the Equity Placement is expected in the coming days. Shares issued pursuant to the Equity Placement will be subject to a hold period of four months from the closing date thereof. The gross proceeds from the Equity Placement together with the remaining financing commitment under the Facility total US$155 million. These proceeds may be used when available to finance working capital requirements and to execute on the Company’s retail footprint expansion plans.

Please note this news release shall not constitute an offer to sell or the solicitation of an offer to buy nor shall there be any sale of the securities in any jurisdiction in which such offer, solicitation or sale would be unlawful. The securities being offered have not been, nor will they be, registered under the United States Securities Act of 1933, as amended, and may not be offered or sold in the United States absent registration or an applicable exemption from the registration requirements of the United States Securities Act of 1933, as amended, and applicable state securities laws. Please refer to the Company’s news releases dated July 10, 2019, May 23, 2019 and April 23, 2019 and to other regulatory documents available on the Company’s profile at www.sedar.com for additional details regarding the Facility and its amendments.

On December 24, 2018, MedMen announced that the Company entered into a definitive business combination agreement (the “Transaction”) to acquire PharmaCann, LLC (“PharmaCann”), one of the largest vertically-integrated multistate cannabis operators in the U.S. The Transaction is subject to the requirements of the U.S. Hart-Scott-Rodino Antitrust Improvements Act of 1976, as amended (the “HSR Act”), which provides that the business combination may not be completed until the applicable waiting period is terminated or expires. On January 11, 2019, MedMen and PharmaCann filed the requisite notification and report forms under the HSR Act with the Antitrust Division of the Department of Justice (the “DOJ”) and the Federal Trade Commission (the “FTC”).

As of August 9, 2019, MedMen and PharmaCann each declared substantial compliance with the Second Request. Completion of the Transaction remains subject to the expiration or termination of the HSR waiting period and other customary closing conditions. Assuming that the conditions to close are satisfied or waived, the Transaction is expected to be complete by the end of calendar year 2019.

As consideration for the Transaction, PharmaCann equityholders are expected to receive approximately 168.4 million subordinate voting shares in the combined company, based on MedMen’s fully-diluted shares outstanding as of June 29, 2019. The total share consideration is subject to change based on the Company’s fully-diluted subordinate voting shares outstanding as of the closing date of the Transaction.

Please refer to the Company’s filings available on the Company’s profile at www.sedar.com for additional details regarding the Transaction.

MedMen is currently licensed for up to 92 locations across 12 states, including locations to be acquired through pending acquisitions. This geographic footprint includes the Company’s industry-leading California retail network of 17 stores.

As MedMen continues to expand and enhance its efforts to engage with the investment community, the Company announced today that it will be relaunching its investor website. The investor site will continue to serve as a valuable resource for investors to stay informed on the latest company news and financials. An updated version of the corporate presentation, which features details on the Company’s business strategy, geographic footprint and path to profitability, has also been posted today on the investor site. Further, the Company has retained strategic investor relations firm ADDO Investor Relations, comprised of professionals with deep investor relations experience with top-tier consumer retail companies, to support the Company’s internal investor relations efforts.

This California Cannabis Company Is Distributing $250 Million of Product Annually