Adding to a 29% gain in Q2 followed by a 27% advance in July, the American Cannabis Operator Index continued to recover from its Q1 decline, increasing 16.2% to 40.12: 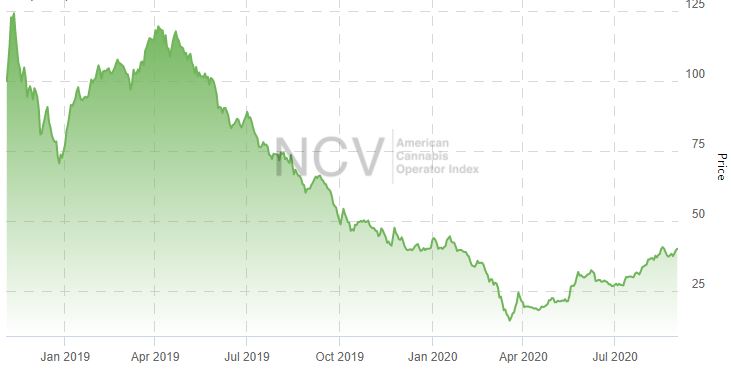 During August, the index included 17 companies, including 14 multi-state operators (MSOs) and 3 focused solely on CBD extracted from industrial hemp. 12 companies posted double-digit percentage gains, with four gaining more than 35%. Strength across the board for MSOs drove the strong performance, though two managed small losses, while all 3 CBD operators declined: 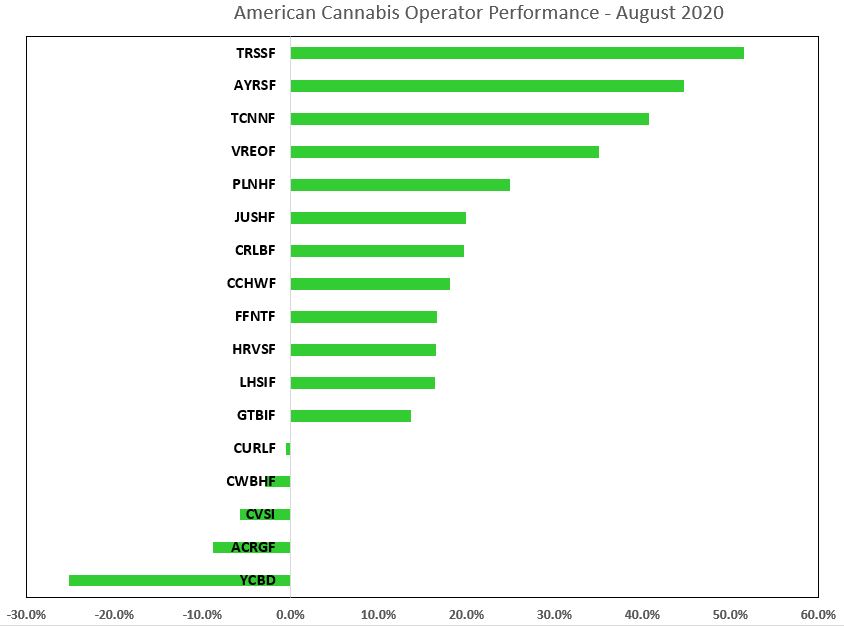 The four best performing stocks included TerrAscend (CSE: TER) (OTC: TRSSF), AYR Strategies (CSE: AYR.A) (OTC: AYRSF), Trulieve (CSE: TRUL) (OTC: TCNNF) and Vireo Health (CSE: VREO) (OTC: VREOF). TerrAscend, one of the strongest performers in July and now up 121% in 2020, pre-announced strong revenue at its Investor Day early in the month and then beat expectations for adjusted EBITDA when it reported later in the month. The company provided full-year guidance for sales of at least C$192 million and adjusted EBITDA of at least C$45 million. AYR Strategies also reported its Q2, which was burdened by temporary closures in both Massachusetts and Nevada. Still, the company was able to report continued profitability. What drove the stock, though, was likely the announcement of the $57 million pending acquisition of CannTech, which will get them into their third state, Pennsylvania. Additionally, the company announced that it will soon reveal another two acquisitions that will expand the footprint to five states. Trulieve’s Q2 was well ahead of expectations, and the company raised its guidance for 2020 to sales of $465-485 million and adjusted EBITDA of $205-225 million. Rumors of acquisition talks also likely influenced the stock’s rise. Trulieve is up more than 92% in 2020. Vireo Health, which was one of the weakest names in July, rebounded after closing the sale of its Pennsylvania production assets and updating investors on its capital spending plans with the proceeds. The company is investing in its core operations in Arizona, Maryland, Minnesota and New York

The four worst performing stocks included cbdMD (NYSE American: YCBD), Acreage Holdings (CSE: ACRG) (OTC: ACRGF), CV Sciences (OTC: CVSI) and Charlotte’s Web (TSX: CWEB)(OTC: CWBHF). While cbdMD was the strongest performer in July, both Charlotte’s Web and CV Sciences were among the weakest stocks in July as well as  in June.  Both CV Sciences and cbdMD reported quarterly financials during the quarter, with CV Sciences below expectations but cbdMD stronger on the back of a strong performance in e-commerce. The CBD space remains highly competitive as participants await regulatory clarity from the FDA. Acreage also reported better-than-expected Q2 financials during the month but tracked Canopy Growth, its potential acquirer.

For September, the number of names in the index will remain at 17.