TORONTO, January 12, 2023–(BUSINESS WIRE)–Organigram Holdings Inc. (NASDAQ: OGI) (TSX: OGI), (the “Company” or “Organigram”), a leading licensed producer of cannabis, announced its results for the first quarter ended November 30, 2022 (“Q1 Fiscal 2023”). All financial information in this press release is expressed in thousands of Canadian dollars (“$”), except for references to $ millions.

Our first quarter of fiscal 2023 demonstrates the success of our expansion at Moncton and continuing productivity improvements in fiscal 2022. 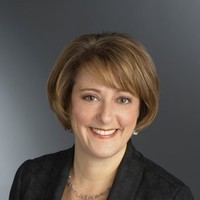 In the quarter, we achieved a record harvest and the lowest cost of cultivation in the history of the Company. We maintained our market position and are confident our disciplined approach to operations and innovation will drive further success in the rest of the year. 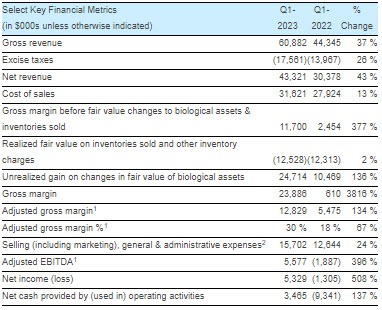 ¹Adjusted gross margin, adjusted gross margin % and Adjusted EBITDA are non-IFRS financial measures not defined by and do not have any standardized meaning under IFRS; please refer to “Non-IFRS Financial Measures” in this press release for more information.

“In Q1 Fiscal 2023, we achieved the highest adjusted gross margin in the Company’s history at $13 million, continued the trend of positive Adjusted EBITDA and delivered positive net income and cash flow,” added Derrick West, Chief Financial Officer. “With the expected completion of the expansion at our Lac-Supérieur facility and continuous improvements in automation and cultivation, we have built a long-term platform to serve increasing market demands and generate value.” 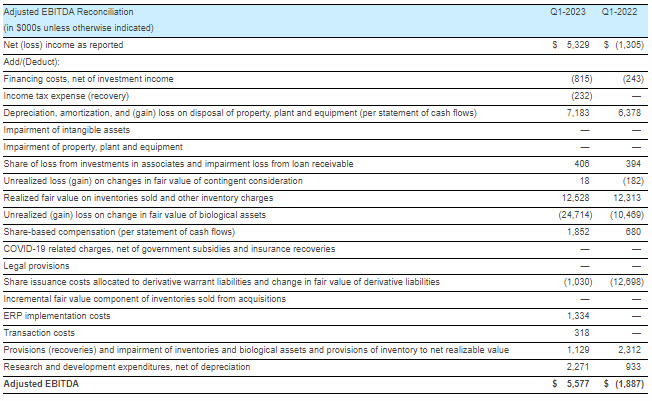 Outstanding basic and fully diluted share count as at January 11, 2023 is as follows:

The Company will host a conference call to discuss its results with details as follows:
Date: January 12, 2023
Time: 8:00 am Eastern Time
To register for the conference call, please use this link:
https://conferencingportals.com/event/RUyBPhzX

To ensure you are connected for the full call, we suggest registering a day in advance or at minimum 10 minutes before the start of the call. After registering, a confirmation will be sent through email, including dial in details and unique conference call codes for entry. Registration is open through the live call.

This news release refers to certain financial performance measures (including adjusted gross margin and Adjusted EBITDA) that are not defined by and do not have a standardized meaning under International Financial Reporting Standards (“IFRS”) as issued by the International Accounting Standards Board. Non-IFRS financial measures are used by management to assess the financial and operational performance of the Company. The Company believes that these non-IFRS financial measures, in addition to conventional measures prepared in accordance with IFRS, enable investors to evaluate the Company’s operating results, underlying performance and prospects in a similar manner to the Company’s management. As there are no standardized methods of calculating these non-IFRS measures, the Company’s approaches may differ from those used by others, and accordingly, the use of these measures may not be directly comparable. Accordingly, these non-IFRS measures are intended to provide additional information and should not be considered in isolation or as a substitute for measures of performance prepared in accordance with IFRS. Adjusted EBITDA is a non-IFRS measure that the Company defines as net income (loss) before: financing costs, net of investment income; income tax expense (recovery); depreciation, amortization, reversal of/or impairment, (gain) loss on disposal of property, plant and equipment (per the statement of cash flows); share-based compensation (per the statement of cash flows); share of loss from investments in associates and impairment loss from loan receivable; change in fair value of contingent consideration; change in fair value of derivative liabilities; expenditures incurred in connection with research & development activities (net of depreciation); unrealized (gain) loss on changes in fair value of biological assets; realized fair value on inventories sold and other inventory charges; provisions and impairment of inventories and biological assets; provisions to net realizable value of inventories; COVID-19 related charges; government subsidies; legal provisions; incremental fair value component of inventories sold from acquisitions; transaction costs; and share issuance costs. Adjusted EBITDA is intended to provide a proxy for the Company’s operating cash flow and derive expectations of future financial performance for the Company, and excludes adjustments that are not reflective of current operating results.

Adjusted gross margin is a non-IFRS measure that the Company defines as net revenue less cost of sales, before the effects of (i) unrealized gain (loss) on changes in fair value of biological assets; (ii) realized fair value on inventories sold and other inventory charges; (iii) provisions and impairment of inventories and biological assets; (iv) provisions to net realizable value; (v) COVID-19 related charges; and (vi) unabsorbed overhead relating to underutilization of the production facility and equipment, most of which is related to non-cash depreciation expense. Management believes that this measure provide useful information to assess the profitability of our operations as it represents the normalized gross margin generated from operations and excludes the effects of non-cash fair value adjustments on inventories and biological assets, which are required by IFRS.

Organigram Holdings Inc. is a NASDAQ Global Select Market and TSX listed company whose wholly-owned subsidiaries include Organigram Inc. and Laurentian Organic Inc. licensed producers of cannabis and cannabis-derived products in Canada, and The Edibles and Infusions Corporation, a licensed manufacturer of cannabis-infused edibles in Canada.

Organigram is focused on producing high-quality, indoor-grown cannabis for patients and adult recreational consumers in Canada, as well as developing international business partnerships to extend the Company’s global footprint. Organigram has also developed a portfolio of legal adult-use recreational cannabis brands, including Edison, Big Bag O’ Buds, SHRED, Monjour and Trailblazer. Organigram operates facilities in Moncton, New Brunswick and Lac-Supérieur, Québec, with a dedicated manufacturing facility in Winnipeg, Manitoba. The Company is regulated by the Cannabis Act and the Cannabis Regulations (Canada).