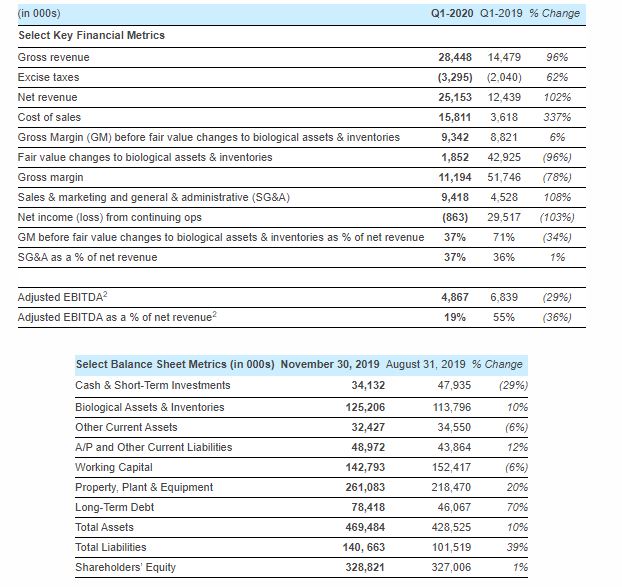 Despite ongoing industry challenges, we are pleased with solid Q1 2020 results and our return to positive adjusted EBITDA during the quarter. Our team was also successful in shipping the first of our Rec 2.0 products as planned and on schedule in December of 2019. 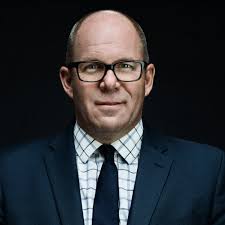 We also look forward to the launch of the remainder of our vape pen portfolio followed soon after by our premium cannabis-infused chocolate products. In addition to an exciting line-up of 2.0 products, we are rolling out a couple of new core strains, such as our high THC Edison Limelight, across the country following their success as limited-time-offers in smaller markets. 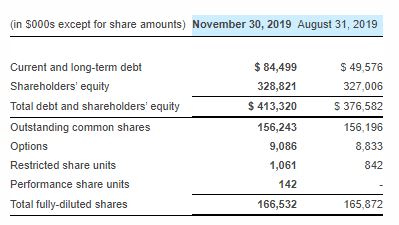 Outstanding basic and fully diluted share count as at January 12, 2020 is as follows:

The Company is scheduled to report its first quarter fiscal 2020 results on Tuesday, January 14, 2020 after market close. The Company will host a conference call to discuss its results:

This news release refers to certain financial performance measures (including adjusted EBITDA, adjusted EBITDA as a percentage of net revenue and cash and “all-in” cost of cultivation) that are not defined by and do not have a standardized meaning under International Financial Reporting Standards (“IFRS”) as issued by the International Accounting Standards Board. These non-IFRS financial performance measures are defined below. Non-IFRS financial measures are used by management to assess the financial and operational performance of the Company. The Company believes that these non-IFRS financial measures, in addition to conventional measures prepared in accordance with IFRS, enable investors to evaluate the Company’s operating results, underlying performance and prospects in a similar manner to the Company’s management. As there are no standardized methods of calculating these non-IFRS measures, the Company’s approaches may differ from those used by others, and accordingly, the use of these measures may not be directly comparable. Accordingly, these non-IFRS measures are intended to provide additional information and should not be considered in isolation or as a substitute for measures of performance prepared in accordance with IFRS. Please refer to the Company’s Q1 2020 MD&A for definitions and reconciliations to IFRS amounts.

Organigram is focused on producing high-quality, indoor-grown cannabis for patients and adult recreational consumers in Canada, as well as developing international business partnerships to extend the Company’s global footprint. Organigram has also developed a portfolio of adult use recreational cannabis brands including The Edison Cannabis Company, Ankr Organics and Trailblazer. Organigram’s primary facility is located in Moncton, New Brunswick and the Company is regulated by Health Canada under the Cannabis Act (Canada) and the Cannabis Regulations (Canada).