MONCTON, NB, July 30, 2018 /CNW/ – Organigram Holdings Inc. (TSX VENTURE: OGI) (OTCQB: OGRMF), the parent company of Organigram Inc. (the “Company” or “Organigram”), a leading licensed producer of medical marijuana based in Moncton, New Brunswick, is pleased to announce its financial results for the three and nine-months ended May 31, 2018.

“Our fiscal third quarter was transformational for the Company. Our production capabilities have increased exponentially, we launched our adult recreational brand strategy and have signed agreements with a number of provinces and private retailers as well as announcing key significant investments from both a strategic and international perspective. As we head into the launch of the adult use recreational market we believe Organigram is well positioned to build upon its domestic medical business into becoming a national player in the adult recreational market and a global player in the medical market.” 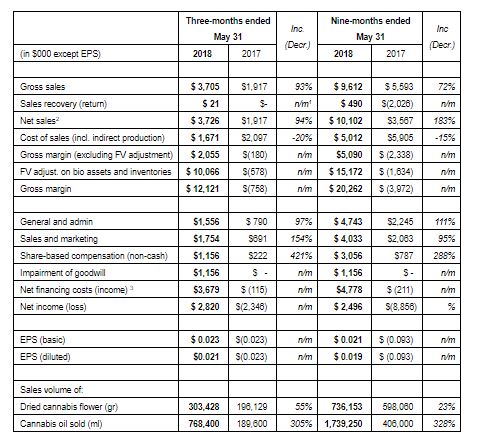 At the end of the third-quarter 2018 the Company reported:

Organigram is focused on producing the highest-quality, indoor-grown cannabis for patients and adult recreational consumers in Canada, as well as developing international business partnerships to extend the company’s global footprint. In anticipation of the legal adult use recreational cannabis in Canada, Organigram has developed a portfolio of brands including The Edison Cannabis Company, Ankr Organics and Trailer Park Buds. Organigram’s primary facility is located in Moncton, New Brunswick and the Company is regulated by the Access to Cannabis for Medical Purposes Regulations (“ACMPR”).