MONCTON, NB, Jan. 28, 2019 /PRNewswire/ – Organigram Holdings Inc. (TSX VENTURE: OGI) (OTCQX: OGRMF), the parent company of Organigram Inc. (the “Company” or “Organigram”), a leading licensed producer of cannabis, is pleased to announce its first quarter results for fiscal 2019. The Company’s fiscal first quarter encompasses operations up to and including November 30, 2018 and as a result, includes the impact on revenue of adult-use recreational cannabis for part of the quarter, which was legalized on October 17, 2018.

The first quarter of 2019 is just the start of what we expect to be a year of tremendous growth. We’ve always believed the Moncton Campus would be a competitive advantage for us being able to produce high-quality indoor-grown product at low cash cost of cultivation. Our first quarter results confirmed that as we reported an adjusted gross margin of 71%. 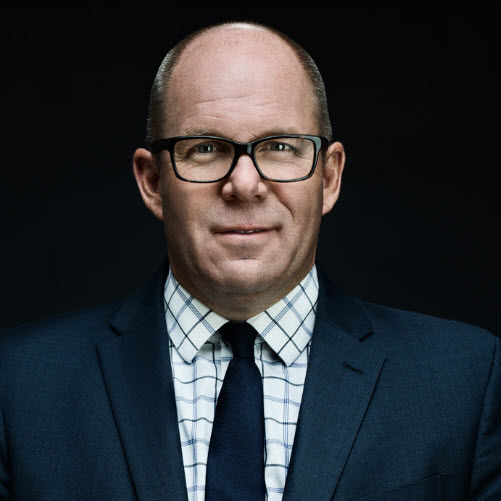 The Company’s net revenue for the quarter was limited by post-harvest (extraction, packaging, excising and labelling) capabilities which it aggressively looks to augment and gain greater efficiencies on.

“While we continue to work hard to take advantage of our enviable inventory build to drive increased sales we are already well underway preparing for the derivative and edibles launch during the fall of 2019,” remarked Greg.

Select Highlights for the First Quarter of Fiscal 2019

Other Milestones and Strategic Initiatives

The following results include sales to the adult-use recreational market, which began in September to meet demand for the launch on October 17, 2018. 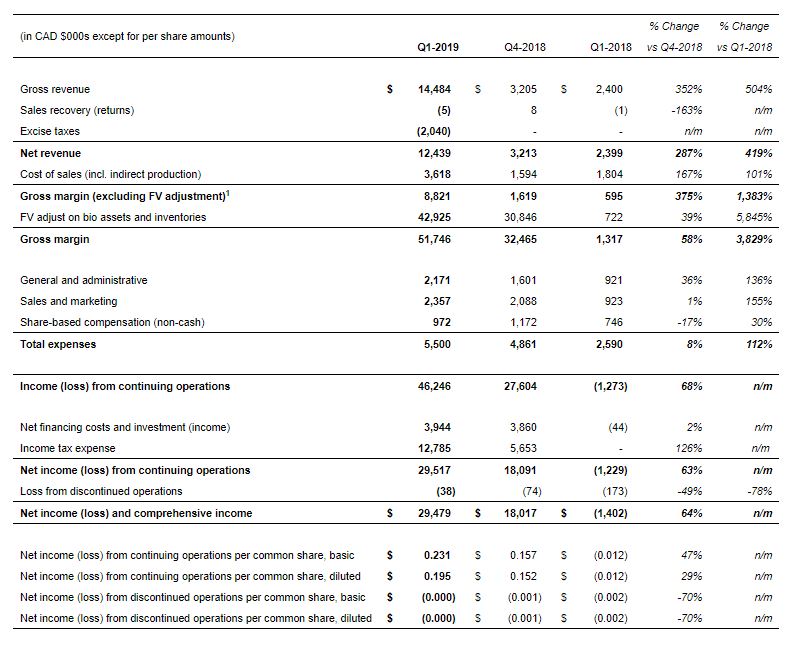 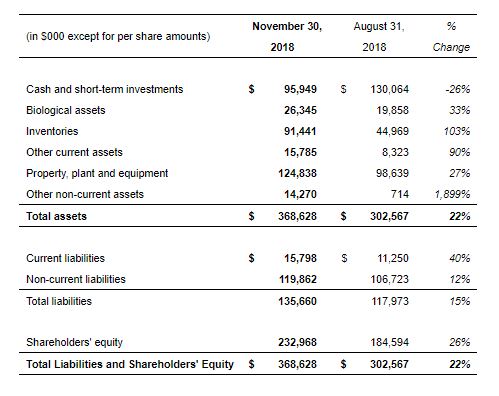 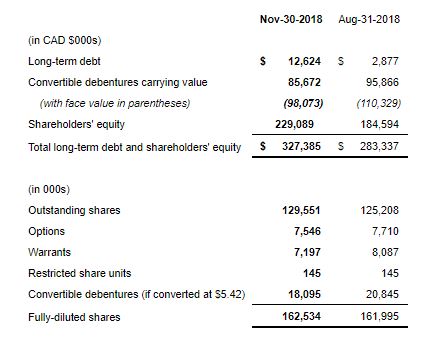 Outstanding share count as at January 25, 2019 is as follows: 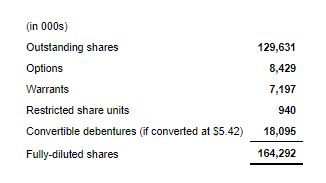 Organigram is focused on producing the highest-quality, indoor-grown cannabis for patients and adult recreational consumers in Canada, as well as developing international business partnerships to extend the company’s global footprint. Organigram has also developed a portfolio of legal adult use recreational cannabis brands including The Edison Cannabis Company, Ankr Organics, Trailer Park Buds and Trailblazer. Organigram’s primary facility is located in Moncton, New Brunswick and the Company is regulated by the Cannabis Act and the Cannabis Regulations (Canada).

¹The financial information in this news release contains certain financial performance measures that are not defined by and do not have any standardized meaning under IFRS and are used by management to assess the financial and operational performance of the Company. These include but are not limited to target production capacity; cost of cultivation per dried flower harvested (both “cash” and “all-in”); Adjusted gross margin (excluding fair value adjustments); Adjusted net income; Adjusted EBITDA and Free cash flow. The Company believes that these non-IFRS financial measures, in addition to conventional measures prepared in accordance with IFRS, enable investors to evaluate the Company’s operating results, underlying performance and prospects in a similar manner to the Company’s management. These non-IFRS financial performance measures are defined in the places in which they appear. As there are no standardized methods of calculating these non-IFRS measures, the Company’s approaches may differ from those used by others, and accordingly, the use of these measures may not be directly comparable. Accordingly, these non-IFRS measures are intended to provide additional information and should not be considered in isolation or as a substitute for measures of performance prepared in accordance with IFRS.

²This news release also contains forward looking financial information related to expected net revenues for Q2 of Fiscal 2019. This is based on management’s review of fulfilled and existing purchase orders. Management is providing this information to give readers a sense of the Company’s near-term performance in a nascent sales environment and using this information for any other purpose may not be appropriate.

³The forward-looking estimates of additional production capacity and costs related thereto are based on a number of material factors and assumptions including that: the facility size will be as estimated with the same amount of cultivation space being used per grow room for cultivation as in Phases 2 and 3; the ratio of dried flower cultivated per canopy square foot of grow room will be consistent with historical output in the Company’s existing facilities; all grow rooms designated as production rooms will be utilized for their intended purposes (from time to time rooms may be used for other purposes, such as for storage); construction of the facilities will be on time in accordance with the estimates set out above and ready for final inspection by Health Canada in time to meet the target onboarding dates; and costs of construction and its various inputs will remain stable.