Planet 13 (CSE: PLTH) (OTCQX: PLNHF) is about more than just Las Vegas. When the company’s team spoke with New Cannabis Ventures this spring, they were building a superstore in California. Now,  the Orange County location is open and the company has plans to enter the Florida and Illinois markets. Co-CEOs Robert Groesbeck and Larry Scheffler told New Cannabis Ventures about Planet 13’s expansion in Nevada, plans for new markets and the company’s funding position. The audio of the entire conversation is available at the end of this written summary.

The executive level of the Planet 13 team is made up of about eight people, and that team has remained fairly consistent. But, the overall team is growing, and the company is promoting talent from within. For example, Lowell Brown was recently promoted from GM of the company’s Las Vegas facility to Director of Retail. The company has nearly 800 employees, and it will continue to bring on new talent as it grows.

Planet 13 accounts for approximately 11.1 percent of sales in Nevada, according to Groesbeck. While the COVID-19 pandemic is ongoing and visitor capacity is not yet at full capacity, the company has had a couple of record months. In July, 100,000 people came through the Las Vegas location’s front door. In August, that number increased to 126,000, according to Scheffler. While COVID remains a concern, Planet 13 be prepared to pivot to handle any restrictions or changes.

The company is expanding in Nevada, increasing its number of cash registers from 43 to 85 by the end of the month and adding more entertainment elements like fighting robots and a digital wall. The company is currently working on 20,000 square feet of construction. Planet 13 will also be working on a club and museum. Phase 4 expansion will represent a total build-out of the company’s 112,000-square-foot facility. Planet 13 also has a right of first refusal with the next-door landlord, giving it the option to have 176,000 square feet for cannabis entertainment.

Planet 13 Will Continue to Look for New Ways to Entertain Its Consumers.

The Orange County Superstore and Vertical Integration in California

Planet 13 opened its Orange County superstore at the beginning of July. California, even more so than Las Vegas, is experiencing diminished tourism. As a result, the growth at this new location has largely come from locals. While this will have an impact on this retail location in the short term, but Planet 13 is bullish on its long-term prospects.

The Orange County superstore is just a part of Planet 13’s strategy for California; the company plans to become vertically integrated in the state. It is actively looking at different assets and options for a production/processing facility, as well as additional neighborhood retail locations.

The company is entering the Florida market with the acquisition of a license from Harvest Health & Recreation. Planet 13 will need to wait for the closing of Trulieve’s Harvest acquisition before moving forward with its strategy in the state. In the meantime, Groesbeck and Scheffler will be traveling to Florida to identify potential sites for superstores and neighborhood retail locations.

The Miami, Orlando and Tampa metro areas are of interest for superstores, but this type of retail location will be a longer-term play for when the state transitions to adult-use. In the short term, the company will be looking for sites for its neighborhood store concept.

Groesbeck and Scheffler still consider Planet 13’s entrance into the Florida market as early. They find the state’s large population and tourism industry major benefits. The state will have even more upside once it does transition to adult use. When considering Florida 18 months ago, the Planet 13 team deemed it too early, but now, it considers the timing right, according to Scheffler.

Planet 13 also has a license in Chicago, where it plans to open another superstore. The company is planning to place that store somewhere in the greater downtown area, with proximity to both rooftops and the tourists who visit the city. 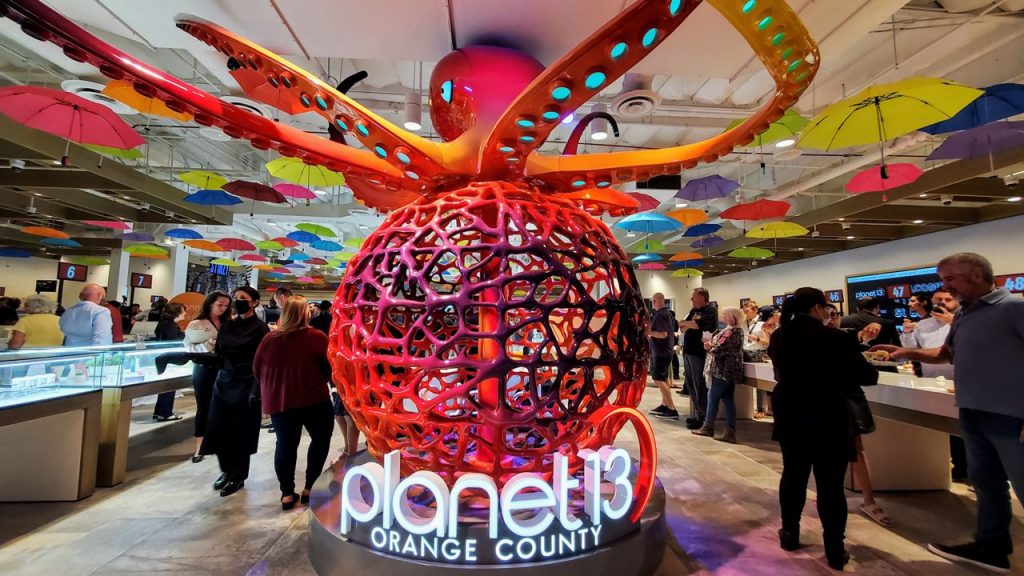 Planet 13 is carefully following the buzz around federal legalization, but there has yet to be any major progress on that front. For the timing being, the company will focus on building at the local level as it waits for banking and tax changes at the federal level.

Prior to the $55 million purchase of the Florida license, Planet 13 sits with about $130 million in cash. The company has no debt, and it is in a good position to be in buying mode. It has the capital to fund the build-outs in Florida, as well as the expansion in Las Vegas.

Historically, Planet 13 has been averse to debt. Right now, the company believes that it has the capital to execute its plans. It may go out to the market for a raise in the future, but not in the near term, according to Groesbeck.

Leadership at Planet 13 spends a lot of time working with the PR and IR teams to connect with shareholders and investors. The company aims to be transparent as possible as it continues to build its brand and portfolio, according to Groesbeck.

Planet 13 reported $32.8 million in Q2 revenue. The leadership team is pleased with the growth in Las Vegas, despite the fact that most large conventions have yet to return to the city. While the team is aware of the continued uncertainty due to COVID, they are hopeful for a bright future.

The company carefully watches the tourism climate in all of its markets. Moving into new markets will be a major opportunity for Planet 13. It takes the approach of allowing legalization in a market to come to fruition and stabilize before making an entrance; Florida being an example of this strategy.

Planet 13 has a strong balance sheet and a careful approach to capital allocation. The company will continue to move forward with its plans, as the team hopes for federal legalization and progress against the pandemic.