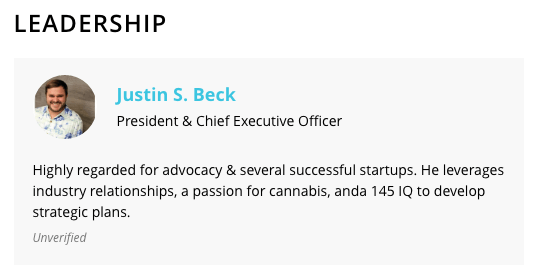 A cannabis company is making bold claims about the potential returns from a project as it begins to raise capital from the public, but our initial review suggests that investors should look more closely into the background of the CEO. Cultivation Technologies, Inc (CTI) has started to publicize its Coachella project, which it is attempting to fund with capital raised privately. CTI is listed on CrowdFunder, which describes the company as a provider of infrastructure and brands to the legal cannabis industry:

The first major project for the company is in Coachella, California which will span 111,500 square feet including (4) cultivation centers, (2) manufacturing facilities, a testing lab, a distributor and transportation hub, and a pharmaceutical office. The company expects to replicate this in other municipalities in California.

The company has filed several Form D filings with the SEC:

The first three filings mentioned Richard O’Connor as the CEO, but the most recent filing lists Justin Beck as the CEO.  He had been listed as a Director and an officer on the March filing as well. Another officer mentioned previously in these filings, Amy Cooper, left the firm in October and, according to Cooper, serves as an advisor now.  Both Cooper and O’Connor appear to be involved with a company called Mobile Farming Systems out of Azusa, California. Mobile Farming Systems lists a marketing office in Irvine on its website that also had previously served as the corporate headquarters for CTI (3 Park Plaza, Suite 490).  Calls to both companies go to a voicemail for Rana Foroughi, VP / Shareholder Relations at CTI. CFO and COO Rick Probst previously worked with Mobile Farming Systems as well, according to his LinkedIn profile.

CEO Beck’s LinkedIn profile suggests that he joined the company earlier this year. The corporate website describes him as a founding shareholder of MJIC and having involvement with a publicly traded vaporizer company.  Beck founded the Marijuana Index, which is owned by MJIC, and was apparently involved very early in Vape Holdings (OTC: VAPE), though this is not disclosed in any SEC filings. VAPE did a reverse-merger in 2013, soared in early 2014 and has lost nearly 100% of its value.

Most interesting about Beck’s background is his apparent involvement in  a penny stock pump and dump scheme that resulted in a settlement that included disgorgement as well as a five-year injunction that ended shortly before Beck joined CTI. Beck was prohibited from “directly or indirectly soliciting investors to purchase or sell securities.” The SEC complaint alleges that Beck was managing director of Del Mar Corporate Communications, which oversaw a “cold call telemarketing campaign of materially false or misleading information” on behalf of Pax Clean Energy, which was suspended from trading by the SEC in 2009.

CTI has shared a timeline that suggests its first site will be fully operating by the end of 2016, with a base-case forecast of $60mm according to the company’s presentation: 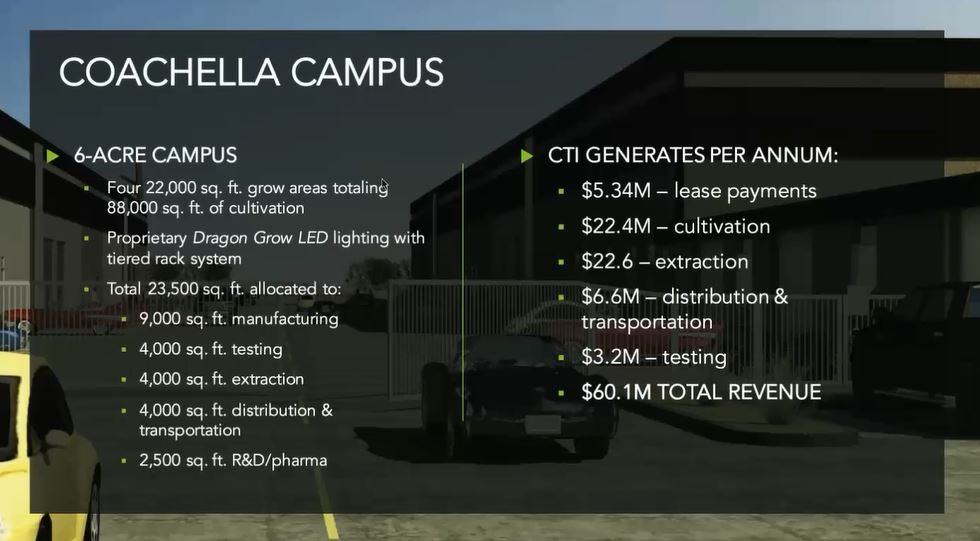 CTI is attempting to raise $10mm by selling shares at $1 per share to accredited investors ($20K minimum) and another $10mm in debt. The pro forma capital capital structure suggests that there will be 40mm shares outstanding after the offering, with a fully-diluted share-count of 70mm shares. The company describes the project in this video:

We haven’t seen the offering document, so we aren’t in a position to judge the offering. We suggest that any investors in cannabis companies thoroughly investigate the people behind the companies and assess the assumptions of the management team regarding the financial model.  CTI is one of many large-scale cultivation projects that are popping up in California as the state moves to a more regulated system, and investors should assess it in the context of how the overall market will develop in the next few years.