The SEC moved today to suspend trading in Corix Bioscience (OTC: CXBS), questioning the accuracy of information it has provided:

The Commission temporarily suspended trading in the securities of Corix Bioscience, Inc. because of questions that have been raised about the accuracy and adequacy of publicly disseminated information concerning, among other things, the company’s assets and operations in Nevada. This information includes claims that CXBS holds a valid, state-issued export license in Nevada for growing, processing, and distributing industrial hemp.

The company’s website includes a copy of the license in question: 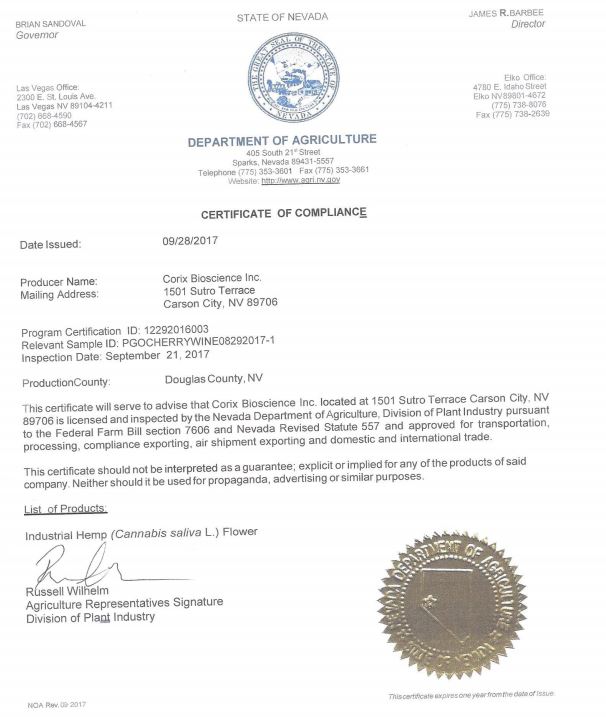 The company, which was previously known as IX Biotechnology, merged into American Housing Income Trust in March, 2017, subsequently changing its name. Corix stated that it intended to be the largest producer of CBD in the United States. The company, which is focused on California, Oregon and Nevada, claims to have operations in Africa and the UK as well as a license to import into Switzerland.

Corix hasn’t yet filed its 10-K for the year ending in December 2017, with its most recent 10-Q filed in November. Subsequent to that filing, it issued an 8-K that detailed claims that shareholder signatures had been forged:

Corix Bioscience, Inc., a Wyoming corporation (the “Company”) files this Current Report on Form 8-K to disclose information revealed to the Company through the sworn testimony of three shareholders: George Elam, William Bills, and Joaquin Flores (the “Shareholders”). The Shareholders claim that certain documents bearing their signatures are not authentic, were not signed by them, and were not signed with their permission.

Trading in the stock is suspended until April 27th.