VANCOUVER, British Columbia, April 29, 2019 /PRNewswire/ — Sunniva Inc. (“Sunniva”, the “Company”, “we”, “our” or “us”) (CSE: SNN) (OTCQB: SNNVF), a North American provider of cannabis products and services, today released its financial results and management’s discussion and analysis for the three months and year ended December 31, 2018 and provided an operational update and outlook for its US and Canadian operations. All figures are reported in Canadian dollars ($), unless otherwise indicated. Sunniva’s financial statements are prepared in accordance with International Financial Reporting Standards.

While we were faced with some challenges in 2018, our existing businesses continued to see revenue growth and we now have strategic verticals assembled in California which have allowed us to leverage our core assets and to launch brands covering numerous cannabis product categories. Hard work by our team in California throughout 2018 has begun to bear fruit in early 2019. 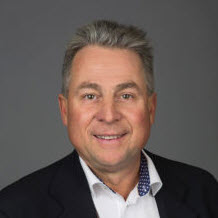 The extraction facility became operational in Q3 2018 and, in conjunction with the acquisition of our distribution company, has enabled us to successfully launch two of our first three product brands into the California market in March 2019. Strong initial sales of our cannabis brands contributed over $10.0 million of revenue to our total preliminary revenue estimate of $14.0 million for Q1 2019 which is almost as much revenue as we generated all of last year.

In 2019, Sunniva plans to focus primarily on the ongoing development of our California assets and brands in California. In Canada, we continue to expand our Natural Health Services (“NHS”) operations with new leadership from Dr. Mark Kimmins. We have suspended operations on our Okanagan Falls property (the “Sunniva Canada Campus”) as we focus efforts on US operations, and we continue to review strategic initiatives in respect of our Canadian assets.

Consolidated Financial Highlights expressed in 000’s of $, except per share amounts 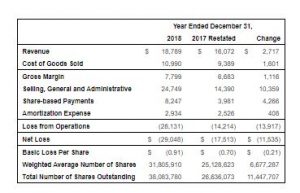 Copies of our consolidated financial statements for the year ended December 31, 2018 and related management’s discussion and analysis of financial results are available on SEDAR at www.sedar.com.

To be added to the Sunniva email distribution list please register at www.sunniva.com/email-alerts

Sunniva, through its subsidiaries, is a vertically integrated cannabis company operating in the world’s two largest cannabis markets – California and Canada. In Canada, Sunniva’s wholly owned subsidiary NHS operates medical cannabis clinics that provide educational and clinical services to patients. In California, Sunniva is focused on creating sustainable premium cannabis brands supported by our large-scale, purpose-built cGMP designed greenhouse and extraction facilities. We offer a steadfast commitment to safety and quality assurance providing cannabis products free from pesticides, which positions Sunniva in California as a leading provider of safe, high quality, reproducible products at scale. Through production from Phase One of our strategically positioned 325,000 square foot high technology greenhouse which is nearing completion and our fully operational Extraction Facility in California, we are launching Sunniva branded products in various product categories and price points including flower, pre-rolls, vape cartridges and premium concentrates. Sunniva branded products will be showcased within our flagship dispensary to be located at the greenhouse and our in-house marketing and distribution team will strive to ensure the placement of Sunniva branded products at licensed dispensaries throughout the state. Sunniva’s management and board of directors have a proven track record for creating significant shareholder value both in the healthcare and biotech industries.