Blank check, or special purpose acquisition corporations (SPACs), are publicly traded companies that raise money from investors to acquire an existing company, generally one that is privately held. The money is held in a trust until a merger or acquisition is identified. Because investors don’t know upfront just where their money will be used, SPACs are often referred to as blank checks.

SPACs offer privately held companies an alternative to the traditional IPO through a merger or other business combination, thus saving them from having to go through the paperwork-intensive and lengthy process. If the SPAC fails to complete a merger or acquisition within the required time frame, all of the public shares are redeemed for a pro rata portion of the cash held in the trust account.

Despite some not so positive returns for several publicly traded companies, the nascent cannabis industry has been ripe for SPACs as investor excitement continues to grow. In this review, we take a look those cannabis-focused SPACs that have popped up in recent years, how much they have raised and who is behind them.

Greenrose Acquisition Corp. noted in its filing with the Securities and Exchange Commission that the cannabis market is “growing, but highly fragmented and undercapitalized” and companies operating across multiple verticals “consistently have trouble accessing capital from traditional sources.”

The company’s management team consists of “experienced deal makers, operators, and investors who have worked in the agricultural and investment services industries,” according to the SEC Filing.

On November 13, 2019, Stable Road Acquisition Corp. (NASDAQ: SRAC) announced it closed on an IPO of $172.5 million. The New York-based company sold 17,250,000 units, including 2,250,000 units issued pursuant to the exercise by the underwriter of its over-allotment option priced at $10 per unit. Cantor Fitzgerald & Co. acted as the sole book running manager for the offering.

The company noted that its strategy is to pursue “one or more business combinations with companies servicing and operating adjacent or ancillary to, the cannabis sector, but which are not directly involved in the production, distribution and sale of cannabis (i.e. businesses that “touch the plant”), according to its SEC filing. They include vaporization products and cannabis accessories; software, such as seed-to-sale tracking; labs; distribution; real estate; brands; and packaging.

On November 7, 2019, New York-based Merida Merger Corp. I (NASDAQ: MCMJ) (NEO: MMK) announced it had raised $120 million via a dual listing on the Nasdaq and Canada’s NEO Exchange. It was the first SPAC to be backed by a dedicated private equity firm (Merida Capital Partners III LP) focused on investing in the cannabis industry.

Merida Capital Partners’ management team has worked with legal cannabis companies since 2009 and has been investing in cannabis-related companies since 2013, according to the SEC filing.  Unlike some of the other cannabis SPAC leadership that have popped up in recent years, Merida’s principals “have helped to build and operate sophisticated cannabis cultivation facilities and have directed significant investments into a broad spectrum of cannabis-related companies ranging from data analytics companies to hydroponic suppliers.”

The company is led by Peter Lee, president, CFO and director and Richard Sellers, executive vice president of mergers and acquisitions. Mitchell Baruchowitz, who is the managing member of Merida Capital Partners, is the non-executive chairman of the board of this SPAC.

Last August, New York-based Silver Spike Acquisition Corp. (NASDAQ: SSPK), announced it priced a $250 million cannabis-focused SPAC. It was incorporated as a Cayman Islands exempted company and is backed by Silver Spike Capital, an asset management fund formed in 2019 and focused on the cannabis industry.

The company’s founder, Scott Gordon, also is the founder and CEO of Silver Spike Capital, which began investing in the cannabis industry in 2014. In 2016, Gordon co-founded and became chairman of Egg Rock Holdings, a holding company that invests in and operates companies in the cannabis market and is the parent company of the Papa & Barkley family of cannabis products. Other members of the team include President William Healy, CFO Gregory M. Gentile, and COO Mohammed Grimeh.

“As the industry continues to transition to a new legislative and regulatory framework, we believe that many companies will need a partner that can assist in providing a level of operational and financial expertise to support their growth. Our team includes a variety of investment, operational and healthcare professionals who will provide operating, technical, regulatory and legal expertise to assist a target business access the public markets,” the company stated in its SEC filing.

On February 5, Los Angeles, Calif.-based Ceres Acquisition Corp. filed a preliminary prospectus with Canadian regulatory authorities for a proposed public offering to raise $120 million. The company plans to trade on the NEO Exchange.

The management team includes CEO Joe Crouthers, who started a cannabis distribution and transportation company brokering sales of input materials to cannabis product manufacturers; President, CFO and Corporate Secretary Jordan Cohen, who has experience in the technology and wellness industries; and, COO Michael Vukmanovich, who got his start in the legal cannabis industry investing, advising and networking with some of the industry’s top founders, according to the prospectus.

The sponsor, Ceres Group Holdings, has been investing in the industry since 2016, with stakes in Fotmer Life Sciences, a licensed cultivation company in Uruguay, vaporizer manufacturer Pax, Palms, a multi-state pre-roll brand, and Silverpeak, a Colorado operator. 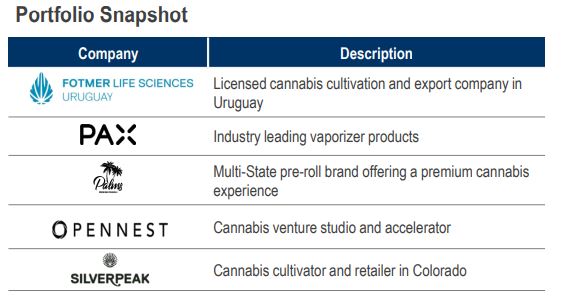 “We believe that our understanding of the dynamics, competitors, trends, risks, unique nature, and opportunities of the cannabis  segment will enable us to efficiently pursue the industry’s best opportunities and potential transactions,” the company stated. It is targeting investments in the US$200-600 million range.

There are numerous other SPACs who entered the market earlier on. They include:

Because so many cannabis companies are privately held, going public via a SPAC is one way to inject lots of capital into a proven company without having to start from the ground up. With these SPACs having been successfully completed, the question now becomes what will they purchase and will they be able to do it within the required deadlines.