The Beehive State legalized medical cannabis on Dec. 3, 2018 with the passage of HB 3001, the Utah Medical Cannabis Act. It amended Ballot Proposition 2, which was approved by Utah voters during the November 2018 general election by a vote of 52.75% to 47.25%. On Sept. 16, 2019, during a special session of Utah’s legislature, lawmakers passed SB 1002, which made further amendments to the law. Most notably, it did away with plans to purchase medical marijuana from licensed private cultivators and distribute it to qualified patients through local health departments. The state also had planned to license five private companies to distribute medical cannabis creating a hybrid program. However, on the advice of attorneys, Utah decided against getting into the business, fearing that county health workers could be prosecuted for marijuana distribution because there is no exemption under the federal Controlled Substances Act that would permit such sales.

When Utah opened up the application process for pharmacies, it received 130 applications from 60 different companies. On Jan. 3, 2020, Utah awarded 14 licenses to medical cannabis pharmacies, two of which (Columbia Care and Curaleaf) are owned by public companies:

Three of the selected pharmacies also were awarded marijuana cultivation licenses. They are: Dragonfly Wellness, True North of Utah and Wholesome Therapy.

Because Utah has lots of land, but a spread-out population, the licenses were divided among four geographic regions. The pharmacies will open in two phases, with eight pharmacies able to open in March. Another six will be allowed to open as early as July.

Although the law allows for up to ten cultivation licenses to be issued, citing concern of oversaturating the market, the Utah Department of Agriculture and Food and the Utah Division of Purchasing selected just eight companies to participate in Utah’s Medical Cannabis Cultivation Program from a total of 81 applicants. They are:

Seven of the eight licensees have crops in the ground. Several of the growers have harvested their first crop, according to a spokesperson for the Utah Department of Agriculture and Food.

Utah patients with qualifying conditions have been able to use medical cannabis with a doctor’s letter since December 2018. However, they have had to cross state lines to get it. The online application process for medical cannabis cards for Utah purchases doesn’t begin until March 1, so there are no figures as yet as to how many people have applied or received cards.

However, Utah did put together two statistical approaches suggesting that either there will be about 11,102 medical cannabis cardholders in the first year, increasing to approximately 38,350 by year five of the program. Or, under a second scenario, the state projects there will be about 16,399 medical cannabis card holders in the first year and 56,598 by year five. That’s just a fraction of Utah’s overall population, which stands at about 3.16 million.

The Utah Department of Health is the organization managing participating healthcare providers. There are 17 providers on the current list of participating Qualified Medical Providers who have consented to share their information online. The law permits physicians, osteopathic physicians, advanced practice registered nurses (APRNs) and physician assistants (PAs) to prescribe.

Utah has a fairly liberal list of qualifying medical conditions as seen in the chart below. 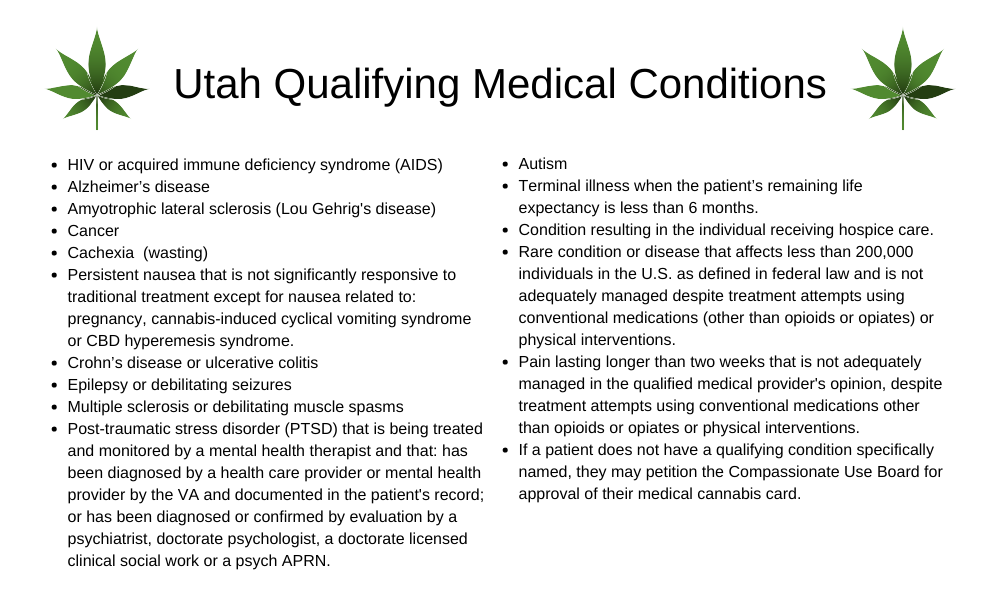 However, providers are limited and may not recommend medical cannabis treatment to more than 175 of the qualified patients at one time, or to no more than 300 patients, if the provider is board certified in the area in which he or she is prescribing.

Allowable forms range from pills to unprocessed cannabis flower as seen in the chart below. 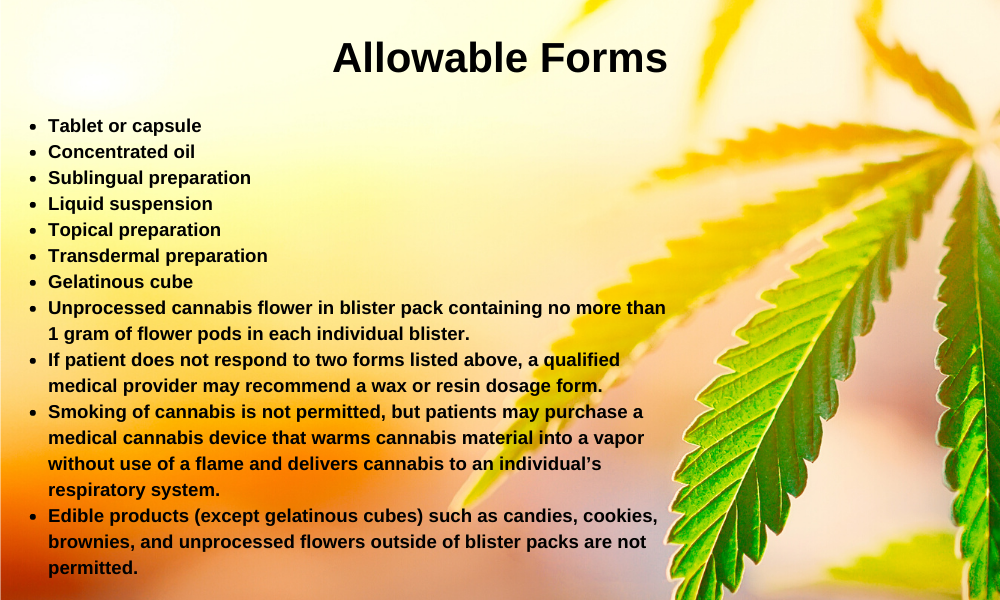 So far, Utah lawmakers are holding firm on their promise to keep recreational marijuana from becoming legal. Meantime, the existing cannabis laws are a moving target with several more amendments being proposed during this current legislative session. SB 121 makes further tweaks to the Medical Cannabis Act including the removal of a blister park requirement for cannabis flower and the expungement of criminal charges for past users who qualified for medical cannabis before the law passed.

One downside right now is the limited number of qualified medical professionals willing to prescribe cannabis fearing legal ramifications. Another is the fact that growers only recently got crops in the ground, so there will be a limited supply when it goes on sale. For Utah, the thinking right now appears to be slow and steady wins the race.