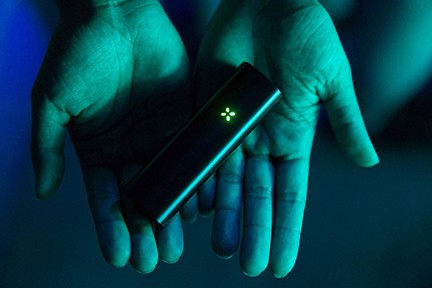 Talking to a few twenty-somethings at a recent concert in Los Angeles, it became clear that not only do they see vaping as the better and healthier alternative to smoking, but equally as an accessory to show off and talk about; something that helps define who they are.

Whether it’s Sarah Silverman flashing her vape pen (she prefers the Blackout X) on the red carpet or Snoop Dog talking about his “dope” vapes on Jimmy Kimmel Live, vaping has become almost a personal style or status symbol. Mary Timmons, 24, who lives in West Hollywood, California, and has had her medical marijuana card since 2013, said she spends as much on her vaporizers as she does on her shoes or handbags. “Me and my friends all save up for the next big thing,” she says. “And that’s the PAX 2 right now.”

The article explores not only Apple-esque Pax Labs, but also O.PenVAPE, which is catering increasingly to females older than 35, as well as several other players in the space, like KandyPens, Lotus Vaping Technologies, Loto Labs and O2Vape.

SLANG Doubles Down on Emerging Cannabis Markets Under New CEO