2018 was a momentous year for Vireo Health, with strong operating performance and substantial progress toward becoming a truly differentiated multi-state operator. We achieved significant revenue growth in our existing markets and also laid the groundwork to double our footprint to ten or more states while simultaneously investing in industry-leading research and innovation. 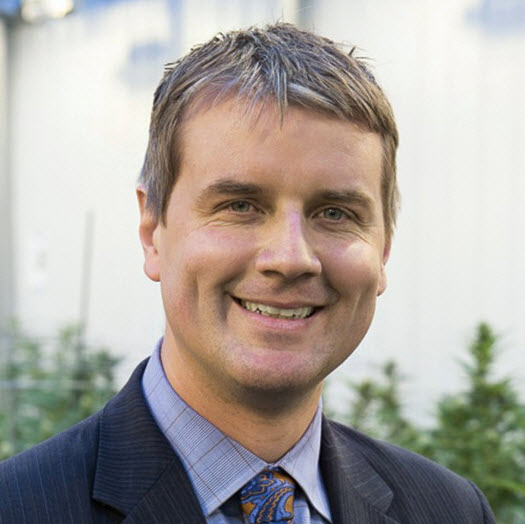 Overall, we believe that the Company is better positioned for future growth, profitability, and value creation for shareholders, and we’re looking forward to another successful year in fiscal 2019.

Total operating expenses for Q4 and FY 2018 were $3.6 million and $12.2 million, respectively, as compared to $700,224 and $6.4 million for the same periods last year. Total operating expenses include selling, general and administrative (“SG&A”) expenses, which totaled $1.6 million and $3.8 million for Q4 2018 and FY 2018, respectively. The increase in SG&A expenses was primarily driven by investments in talent to support the Company’s growing businesses.

Other expense was $1.2 million in Q4 2018 and $2.5 million for FY 2018. These non-operating expenses primarily reflect interest expenses associated with recent sale-and-leaseback transactions of certain cultivation facilities.

On March 20, 2019, Vireo commenced trading on the Canadian Securities Exchange under ticker symbol “VREO” following the successful completion of the Company’s reverse takeover (“RTO”) of Darien Business Development Corp. In conjunction with the RTO, Vireo raised approximately $51.4 million in proceeds through a brokered and non-brokered private placement. The Company intends to utilize the net proceeds from the transaction to help finance M&A activity, as well as for general corporate purposes including business development, capacity expansion projects, working capital requirements and other strategic initiatives.

Total equity shares outstanding as of December 31, 2018, were 2,206,269. As of the date of this release, total fully-diluted equity shares outstanding, on an as converted basis, were 111,882,624. The increased share count as compared to December 31, 2018 is primarily attributable to share-split activity as well as the sale of subscription receipts in conjunction with the Company’s RTO during the first quarter of 2019.

Dr. Kingsley commented, “Our management team is focused on executing several key strategic initiatives in fiscal year 2019, including the rollout of new dispensary locations, the pursuit of additional organic and acquisitive growth opportunities, and the development of intellectual property that we can monetize for the long-term benefit of patients, consumers, and shareholders. In the coming months, our subsidiaries in Minnesota and New York will also begin planting hemp crops that will support our IP development initiatives. We’re looking forward to sharing updates on those projects, in addition to our ongoing scientific research studies and other growth initiatives, as material updates become available.”

Vireo Health management will host a conference call with research analysts on Tuesday, April 30, 2019 at 8:30 a.m. ET to discuss its financial results for Q4 and FY ended December 31, 2018. The conference call may be accessed by dialing 866-211-3165 (Toll-Free) or 647-689-6580 (International) and entering conference ID 4176936. A live audio webcast of this event will also be available in the Events & Presentations section of the Company’s Investor Relations website at https://investors.vireohealth.com/ and will be archived for one year.

Vireo Health refers to certain non-IFRS financial measures such as adjusted net income, Earnings Before Interest, Taxes, Depreciation and Amortization (EBITDA) and adjusted EBITDA (defined as earnings before interest, taxes, depreciation, amortization, less certain non-cash equity compensation expense, one-time transaction fees, and other non-cash items. These measures do not have any standardized meaning prescribed by IFRS and may not be comparable to similar measures presented by other issuers. Please see the Supplemental Information and Reconciliation of Non-IFRS Financial Measures at the end of this news release for more detailed information regarding non-IFRS financial measures.

Vireo’s mission is to build the cannabis company of the future by bringing the best of medicine, engineering and science to the cannabis industry. The Company’s physician-led team of more than 300 employees provides best-in-class cannabis products and customer experience. Vireo cultivates cannabis in environmentally-friendly greenhouses, manufactures pharmaceutical-grade cannabis extracts, and sells its products at both company-owned and third-party dispensaries. The Company is currently licensed in ten states including Arizona, Maryland, Massachusetts, Minnesota, Nevada, New Mexico, New York, Ohio, Pennsylvania, and Rhode Island.  For more information about the company, please visit www.vireohealth.com. 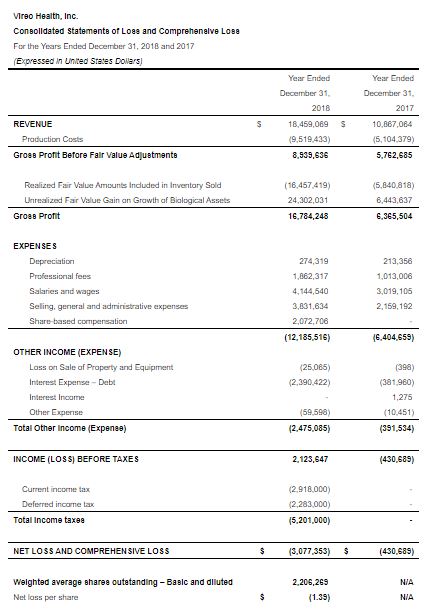 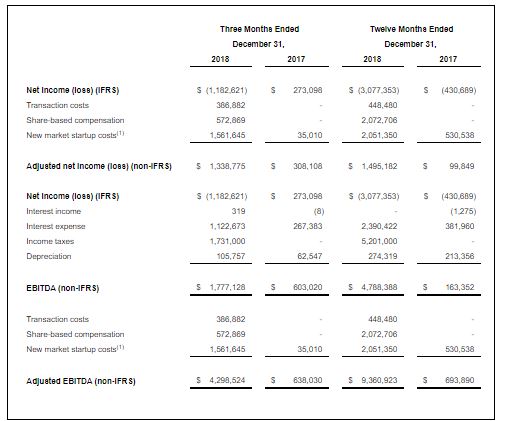 “New market startup costs include expenses such license application fees, legal and other professional fees, and other administrative start-up expenses