We continued to experience strong revenue growth during the first quarter, with increasing patient counts in Minnesota and New York and contributions from wholesale revenue streams in Maryland and Pennsylvania during the quarter. It was also a very successful quarter from an execution standpoint, as we completed several strategic acquisitions and began construction on many development projects that will help us meet the growing demand for our products across our operating footprint. 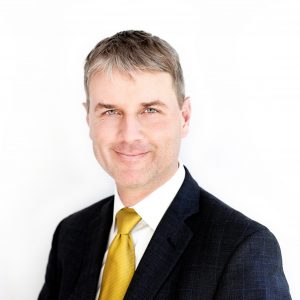 Following the successful completion of our RTO transaction in March and subsequent acquisition activities, Vireo’s future has never looked brighter. We have a world-class team of professionals leading our expansion strategies, and we believe that our focus on bringing the best of medicine, science, and engineering to the cannabis industry will create compelling long-term value for all of our stakeholders.

Total operating expenses were $3.7 million, as compared to $3.3 million in the same period last year. Total operating expenses include selling, general and administrative (“SG&A”) expenses, which totaled $1.4 million, as compared to $735,032 last year. The increase in SG&A expenses was primarily attributable to increased salaries and wages, share-based compensation, professional fees, and general and administrative expenses to support the Company’s growing business, as well as start-up expenses related to buildout and pre-revenue operations in the states of Maryland and Ohio.

Total other expense was $4.6 million during Q1 2019. These non-operating expenses primarily reflect listing expenses related to the Company’s recent RTO and subsequent listing on the Canadian Securities Exchange, as well as interest expenses associated with recent sale-and-leaseback transactions of certain cultivation facilities.

Q1 2019 EBITDA was $172,506, as compared to a loss of $856,803 in Q1 2018. Excluding listing expense and share-based compensation expenses, Vireo generated Adjusted EBITDA of $3.8 million in Q1 2019, compared to $273,521 in Q1 2018. Please refer to the Supplemental Information and Reconciliation of Non-IFRS Financial Measures at the end of this press release for additional information.

On May 29, 2019, the Company announced the hiring of Harris Rabin as Chief Marketing Officer. Mr. Rabin will be responsible for overseeing Vireo’s brand marketing, e-commerce, retail, and other sales initiatives. Mr. Rabin is an accomplished marketing leader and joins Vireo with two decades of experience, including senior leadership roles in the consumer healthcare and beverage alcohol industries. He most recently served as Global Vice President of Marketing at Anheuser-Busch InBev (ABInBev), where he oversaw a multi-billion-dollar global portfolio of core beer brands.

On May 30, 2019, the state of Minnesota enacted new legislation amending the state’s medical cannabis program. These measures were passed as part of a health and human services bill, and will allow for the existing licensed operators in the state to double the number of dispensaries, as well as to write off some business expenses and buy hemp from local farmers. These changes will result in Vireo Health increasing its number of dispensaries in the state from four to eight, and increases Vireo’s total number of dispensary licenses to 32 as of the date of this announcement.

During fiscal year 2019, Vireo continues to expect to conduct the following development activities:

Dr. Kingsley commented, “Fiscal year 2019 will be a pivotal year of growth for Vireo Health, as we anticipate the addition of at least six new revenue generating states during the year. The rollout of our Green Goods™ dispensaries in Pennsylvania is on schedule, and we now anticipate that we’ll exit the year with at least 20 operational dispensaries across our nationwide footprint. We are continuing to pursue additional organic and acquisitive growth opportunities, as well as the development of monetizable intellectual property, and we also believe improving regulatory environments in many of our state jurisdictions could present additional opportunities for growth over the near- to medium-term future.”

Additional information relating to the Company’s first quarter and 2019 results is available on SEDAR at www.sedar.com. Vireo Health refers to certain non-IFRS financial measures such as adjusted net income, Earnings Before Interest, Taxes, Depreciation and Amortization (EBITDA) and adjusted EBITDA (defined as earnings before interest, taxes, depreciation, amortization, less certain non-cash equity compensation expense, one-time transaction fees, and other non-cash items. These measures do not have any standardized meaning prescribed by IFRS and may not be comparable to similar measures presented by other issuers. Please see the Supplemental Information and Reconciliation of Non-IFRS Financial Measures at the end of this news release for more detailed information regarding non-IFRS financial measures.

Vireo’s mission is to build the cannabis company of the future by bringing the best of medicine, engineering and science to the cannabis industry. The Company’s physician-led team of more than 300 employees provides best-in-class cannabis products and customer experience. Vireo cultivates cannabis in environmentally-friendly greenhouses, manufactures pharmaceutical-grade cannabis extracts, and sells its products at both company-owned and third-party dispensaries. The Company is currently licensed in ten states including Arizona, Maryland, Massachusetts, Minnesota, Nevada, New Mexico, New York, Ohio, Pennsylvania, and Rhode Island. For more information about the company, please visit www.vireohealth.com. 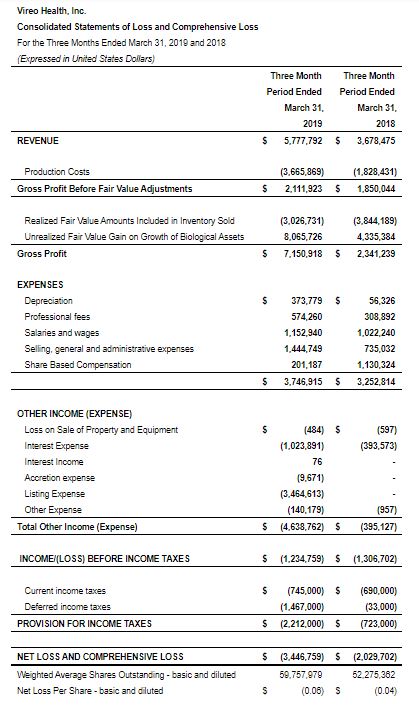 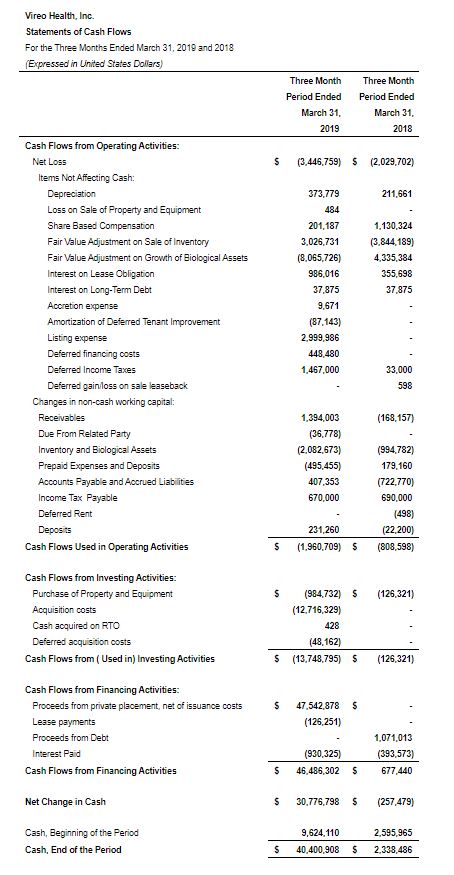 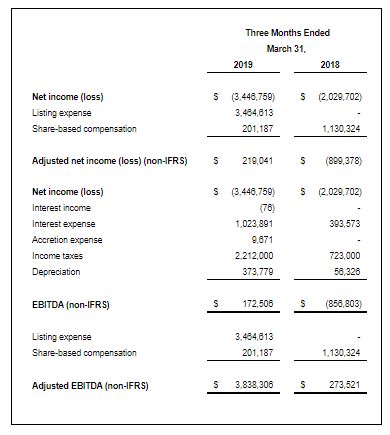