27 companies currently qualify for inclusion, with 14 filing in U.S dollars and 13 in the Canadian currency. Since our last report, we added three companies, including Charlotte’s Web (CSE: CWEB) (OTC: CWBHF), Supreme Cannabis (TSXV: FIRE) (OTC:  SPRWF) and Trulieve (CSE: TRUL). Charlotte’s Web and Trulieve, ranked first and second among companies reporting in U.S. dollars, are two newly public companies that recently revealed their financials and that represent a new breed of cannabis company going public (with high revenue). We note that two companies likely qualify but can’t be included at this time due to their not providing quarterly data yet, Cannex Capital (CSE: CNNX) (OTC: CNXXF) and Elixinol Global (ASX: EXL) (OTC: ELLXF).

Charlotte’s Web and Trulieve were the only companies reporting financials in U.S. dollars that we updated in September, though KushCo Holdings (OTC: KSHB) pre-announced its Q4 sales at about $19 million, which would represent 120% growth from year-ago sales. The company’s financial report is due by the end of November. Trulieve, which began trading publicly earlier this week, disclosed in its Filing Statement its Q2 sales of $23.3 million, all derived from medical cannabis in Florida. Charlotte’s Web went public through an IPO at the end of August and revealed in its prospectus its $17.2 million sales generated during Q2. 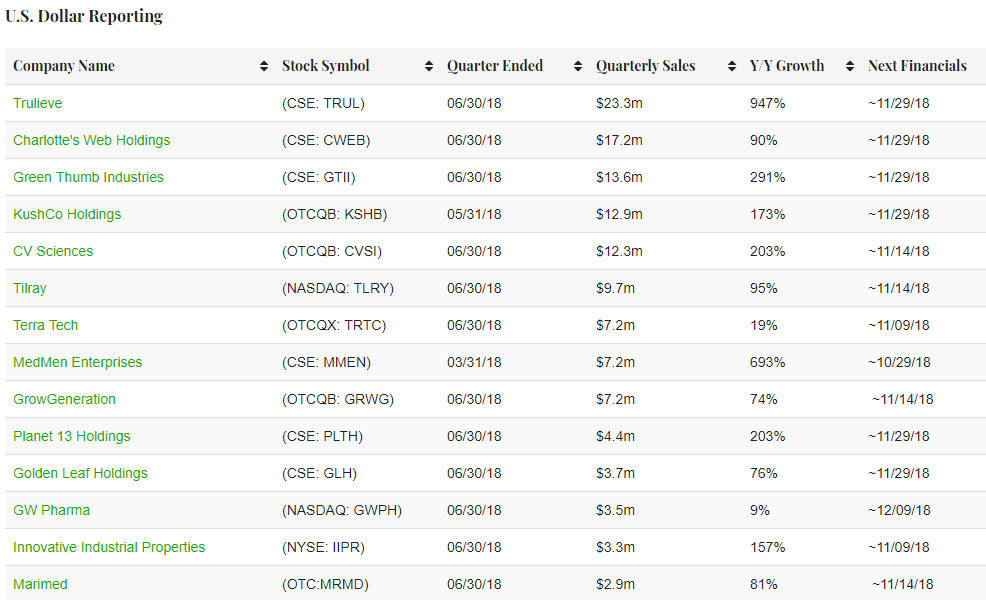 None of these companies will be reporting in the month of October except MedMen Enterprises(CSE: MMEN) (OTC: MMNFF), which is expected to report its fiscal year ending in June and shared some preliminary guidance about system-wide revenue for its fiscal Q4 ending June 30th last month.

Of the Canadian companies that report in Canadian dollars, Aurora Cannabis (TSX: ACB) (OTC: ACBFF) generated sales of C$19.1 million in its fiscal Q4 ending June 30. The company shared pro forma financials that indicated that had MedReleaf, which it acquired after the end of the quarter, been included, it would have sales in excess of C$33 million. Isodiol International (CSE: ISOL) (OTC: ISOLF) restated its FY18 financial reports and also shared the results from its FY19-Q1 ending June 30th, with sales of C$9.2 million rising 474% from a year ago. Finally, Supreme Cannabis joined the list for the first time after reporting sales in its fiscal Q4 ending June 30th of C$3.6 million as it completed its first year of sales, which were $8.85 million for the full year.

Of the companies that report in Canadian dollars, only Aphria (TSX: APH) (OTC: APHQF) is due in October. According to Sentieo, the company is expected to generate sales of C$14 million in its fiscal Q1 ending August 31, representing growth of 129%.