39 companies currently qualify for inclusion, with 24 filing in U.S dollars and 15 in the Canadian currency. Since our last report near the end of November, we added multi-state operator Cresco Labs (CSE: CL) (OTC: CRLBF) to the list of companies reporting in American dollars. The company, which recently listed on the CSE, ranked seventh, with sales in the quarter ending September 30th of $12.7 million. Among companies reporting in Canadian dollars, Organigram (TSXV: OGI) (OTC: OGRMF) fell off the list, at least for now, while HEXO Corp (TSX: HEXO) (OTC: HYYDF) and Nutritional High (CSE: EAT) (OTC: SPLIF) qualified for the first time. We expect to be adding several additional companies over the coming months as existing public companies continue to ramp up sales and as others begin to trade publicly.

The addition of Cresco Labs was the only change to the companies reporting in American dollars: 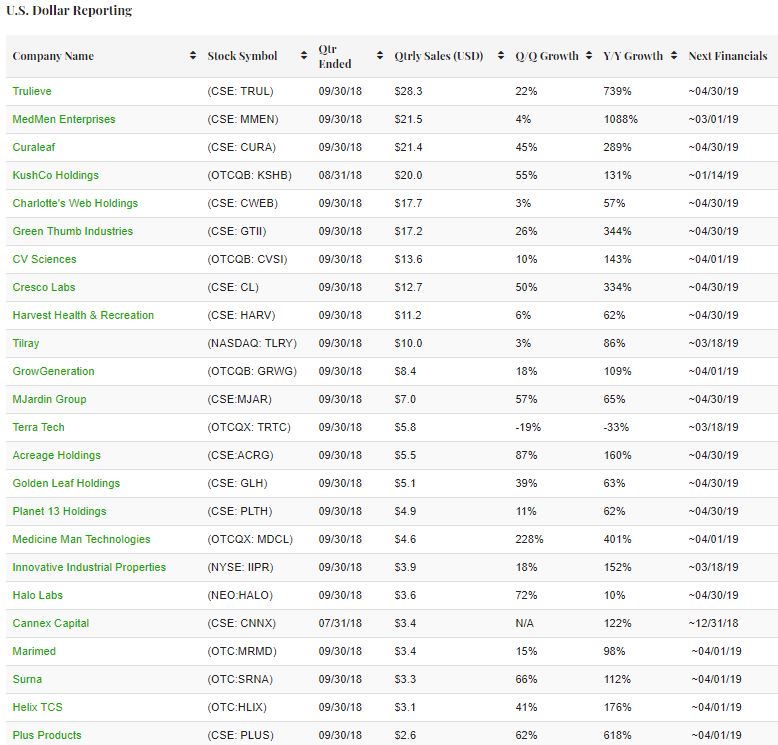 We expect a report from Cannex Capital (CSE: CNNX) (OTC: CNXXF) on December 31st. In January, KushCo Holdings (OTC: KSHB) will report its FY19-Q1. According to Sentieo, analysts project the company’s Q1 sales were $18.8 million, which would represent growth of 112%.

Of the companies that report in Canadian dollars, Canadian LP HEXO benefited from sales into the adult-use market, which boosted revenue 374% from a year ago to C$6.7 million. Nutritional High derived most of its C$5.8 million in sales from distribution of cannabis products in California.  1933 Industries (CSE: TGIF) (OTC: TGIFF), which generates sales from its CBD products as well as its Nevada wholesale operations, grew revenue 87% in its fiscal Q1 ending in October to C$4.6 million. 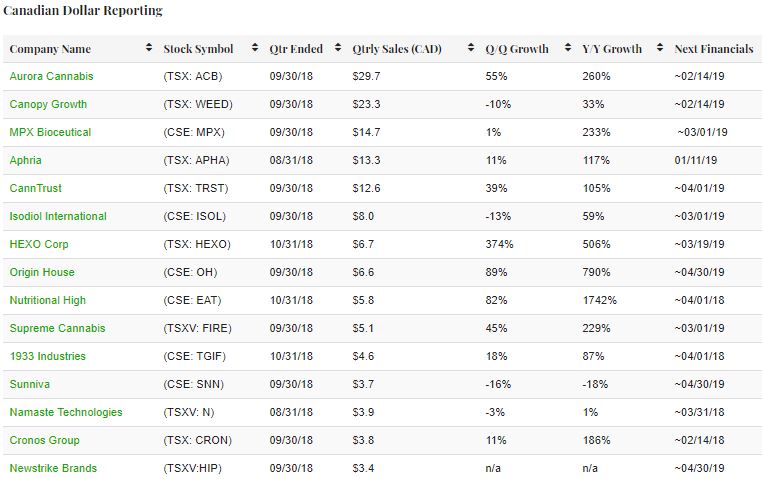 Of the companies that report in Canadian dollars, we expect two will issue financial reports in January, including Aphria (TSX: APHA) (NYSE: APHA), which will report its fiscal Q2 ending November 30th , and Organigram (TSXV: OGI) (OTC: OGRMF), which should return to the list when it reports its first quarter for the fiscal year ending August 31, 2019. According to Sentieo, Aphria is expected to report revenue of C$40.1 million, which would represent growth of 363% from a  year ago as the company recognizes sales into the adult-use market.  Analysts expect Organigram, which has provided guidance for Q1 sales in excess of the C$12.4 million it generated in all of FY18, to produce sales for the quarter ending November 30th of C$13.9 million, up 418% from a year ago.