The Public Cannabis Company Revenue Tracker, managed by New Cannabis Ventures, ranks the top revenue producing cannabis stocks that generate industry sales of more than US$2.5 million per quarter. This data-driven, fact-based tracker will continually update based on new financial filings so that readers can stay up to date. Companies must file with the SEC or SEDAR to be considered for inclusion. Please note that we expect to raise the minimum quarterly revenue in April to US$5 million.

44 companies currently qualify for inclusion, with 27 filing in U.S dollars and 17 in the Canadian currency. Since our last report in mid-February, we have added Alcanna (TSX: CLIQ) (OTC: LQSIF), as we had suggested would be the case. We expect to add several companies in the coming months, including TILT Holdings (CSE: TILT) (OTC: TILTF), which announced very strong January pro forma revenue and is likely to qualify for its Q4, which should be reported in March or April.

So far in March,  Acreage Holdings (CSE: ACRG.U) (OTC: ACRGF), CV Sciences (OTC: CVSI), Innovative Industrial Properties (NYSE: IIPR) and Terra Tech (OTC: TRTC) have reported. Acreage holdings reported sales of $10.5 million, up 90% from the prior quarter and 344% from a year ago. The company also shared a pro forma revenue of $22.9 million, which takes into account revenue from managed entities. CV Sciences revenue growth slowed slightly during its Q4, which the company attributed to some temporary regulatory push-back in a few states. The company’s revenue of $14.2 million grew 96% from a year ago and 4% from the prior quarter. Innovative Industrial Properties continues to see strong growth in its financial metrics, which included revenue growth of 110% from a year ago and 22% from the prior quarter to $4.8 million. Finally, Terra Tech continued to see pressure on its California operations, with cannabis-related revenue in Nevada and California dropping 40% during Q4 compared to the prior year’s Q4. 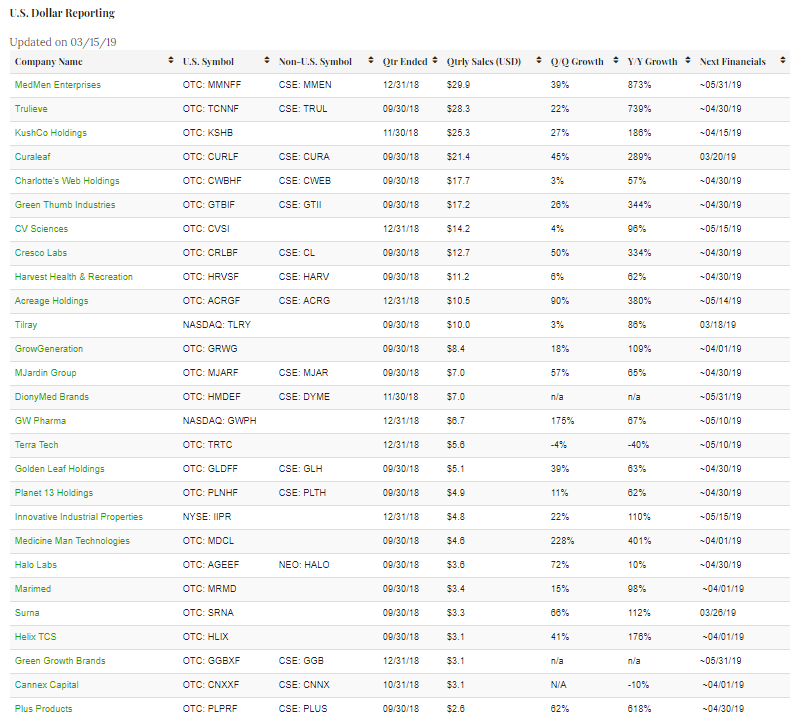 Of the companies that report in Canadian dollars, Alcanna and HEXO Corp (TSX: HEXO) (NYSE American: HEXO) have reported thus far in March. For Alcanna, this was its initial quarter to report cannabis sales, which totaled C$8 million, all generated from its five stores in Alberta.  HEXO sales fell a bit short of the expected sales of C$14.6 million in its fiscal Q2 ending in January at C$13.4 million in net revenue, but the company posted strong growth nonetheless, up 135% from the prior quarter and up 1037% from a year ago. 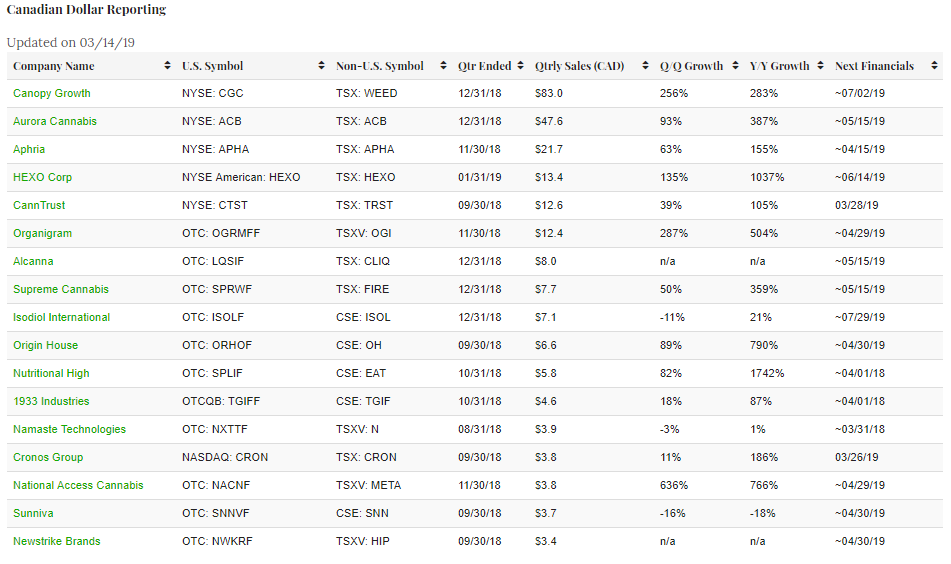