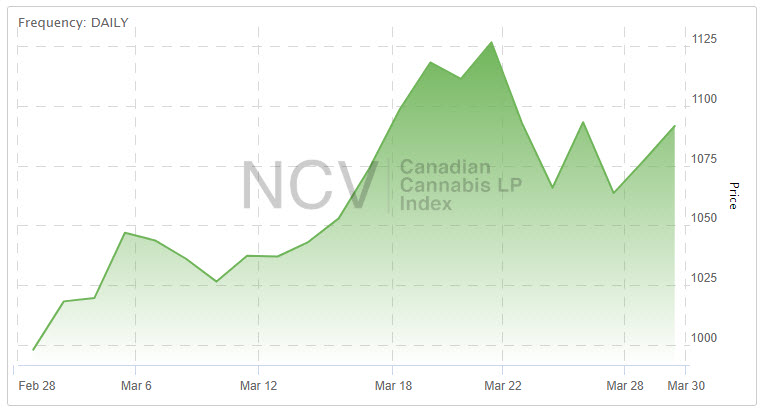 The index remains substantially below the all-time closing high of 1289.57 on October 15th, just ahead of Canadian legalization. It has increased 72.7% since bottoming on December 21st : 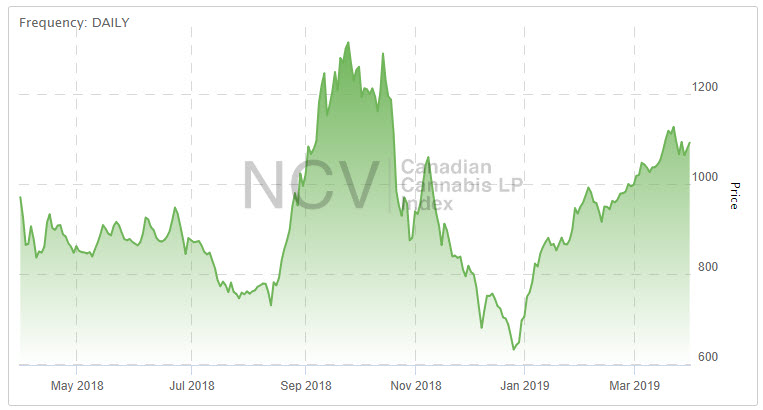 Tier 1, which included the LPs that are generating sales of at least C$10 million per quarter (in 2018, we used C$4 million as the hurdle), cooled off in March, declining 0.3%, giving it a year-to-date gain of 68.0% after declining 7.7% in 2018. This group included Aphria (TSX: APHA) (NYSE: APHA), Aurora Cannabis, CannTrust (TSX: TRST) (OTC: CNTTF), Canopy Growth (TSX: WEED) (NYSE: CGC) and Organigram (TSXV: OGI) (OTC: OGRMF) . Within the group, Aurora Cannabis stood out with a gain of 21.9%, while CannTrust was the worst performer, declining 13.8% following disappointing financials for Q4.

Tier 3, which included the 40 LPs that generate quarterly sales less than C$2.5 million, rose 10.8%, leaving its year-to-date gain at 50.8% after declining 26.4% in 2018. The best performers in the group were Terranueva (CSE: TEQ), Sproutly (CSE: SPR) (OTC: SRUTF), AgraFlora Organics (CSE: AGRA) (OTC: PUFXF), Eve & Co (TSXV: EVE) (OTC: EEVVF) and Harvest One Cannabis (TSXV: HVT) (OTC: HRVOF). Terranueva, based in Quebec, was added last month. Sproutly reported that it is in talks with a beverage company. AgraFlora, which has seen substantial insider selling, has raised capital recently, issuing almost 45 million shares to Organic Flower Investments Group for $20 million. Eve & Company was able to secure a construction loan from a Tier 1 bank. Harvest One expanded its distribution, including with Shoppers Drug Mart, and announced the pending acquisition of Delivra. The 10 worst performers for the month were part of Tier 3.

The returns for the overall sector varied greatly, with nine names gaining more than 20%, while five declined by more than 20%: 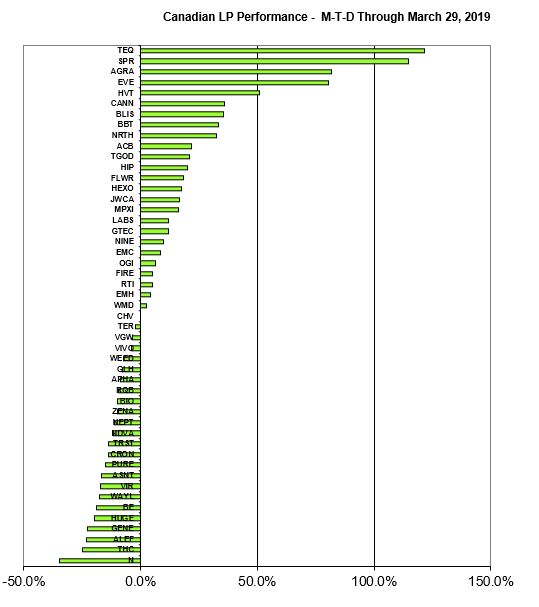 For April, the overall index had one addition, Rubicon Organics (CSE: ROMJ) (OTC: ROMJF) joining in Tier 3. Additionally, we have removed Ascent Industries (CSE: ASNT) (OTC: PGTMF) due to its pending sale of its Canadian operations. Additionally, HEXO Corp advances to Tier 1 this month. Readers should be aware that Tilray, with no Canadian listing, is not eligible for inclusion in the index, which is denominated in Canadian dollars.

CannTrust Can’t Quite Turn the Page to a New Chapter