This is a copy of the October 28th edition of our weekly Newsletter, which we have been publishing since October 2015.

What a difference a week makes. Just ahead of legalization, 6 Canadian licensed producers posted all-time highs, including Aurora Cannabis, CannTrust,Canopy Growth, HEXO Corp, Organigram and TerrAscend, though the broad market didn’t follow through and failed to clear its early 2018 highs. A week later on this past Tuesday, 10 different LPs posted 2018 lows. Last week’s action was decidedly negative for the Canadian LPs and broad market. The New Cannabis Ventures Canadian Cannabis LP Index retreated 13.9% and is down 25.8% since the recent peak on October 15th, while the Global Cannabis Stock Index slipped 17.8% during the week and is down 26.3% since the 15th.

On August 14th, both the Global Cannabis Stock Index and the Canadian Cannabis LP Index had posted 2018 lows, but the announcement of the C$5 billion Constellation investment into Canopy Growth sparked the market. Even with the recent decline, the market remains well ahead of those 2018 lows as well as the 2017 lows set exactly a year ago in late October. Compared to the close from October 27, 2017, the Global Cannabis Stock Index has advanced 55.7%, while the Canadian Cannabis LP Index is up 99.5%.

The markets have enjoyed a substantial run-up from mid-August that is likely due to enthusiasm over Canada legalizing, which looks to have been a “sell-the-news” event, but also speculation that companies like Diageo and Coca-Cola could enter the space. A sliver lining to the correction over the past two weeks is that it certainly allows out-of-industry buyers to pursue acquisitions or investments without the appearance of  top-ticking. We found it interesting that Constellation timed both of its announcements about its investments into Canopy Growth at periods of consolidation in prices rather than when prices were rallying.

Given how poorly Constellation has performed over the past year since announcing the initial investment, we expect that cross-industry buyers may give valuation at least some thought: 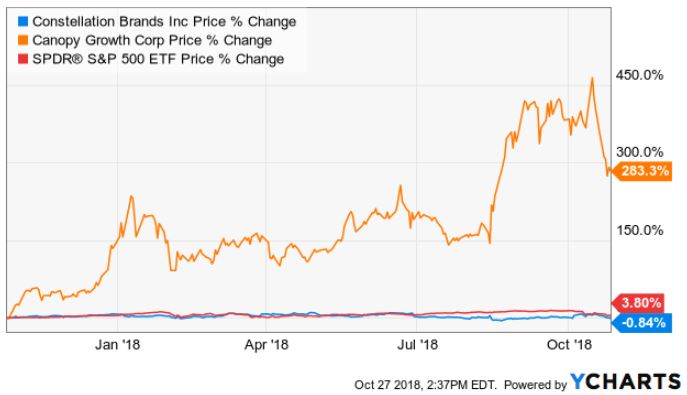 It’s not clear why the bold move by Constellation a year ago hasn’t been better received by its investors. Clearly the first purchase has been highly beneficial to the company given the sharp rise in the price of Canopy Growth’s stock, but the purchase wasn’t substantial relative to the balance sheet of the company. Some believe the second buy, which is much larger and still pending, was too expensive, but Canopy Growth is trading above that purchase price. Perhaps shareholders aren’t happy that the company has taken on debt to fund the investment. In any event, while the near-term impact to the stock hasn’t been positive, those looking to make cross-industry investment can look to the tobacco company Pyxus International (formerly Alliance One International) acquisition of a controlling stake in an LP earlier this year as an example of value creation. Pyxus, despite a big pullback, is still up almost 100% since announcing the transaction in February.

The lower prices across the sector also bode well for further consolidation within the industry. Aphria, Aurora Cannabis, Canopy Growth and VIVO Cannabis have all closed at least one buy of another LP this year. With that said, it seems unlikely that Aurora or Canopy will be the consolidators of Canadian LPs going forward based on comments management at both companies have made.

Whether it is consolidation from within the industry or investments or acquisitions by alcohol, tobacco, consumer package goods or pharmaceutical companies, we continue to see the Canadian LPs as having strategic value to a broad array of companies . The decline in prices, in our view, increases the likelihood that we see some transactions ahead.

Growers Network, a private community for commercial cannabis professionals (and our sponsor for this Sunday newsletter), has been providing detailed inside looks at some of the most interesting cannabis cultivation facilities in the United States. Check out Episode 4 of the Canna Cribs Season 1, featuring Los Sueños Farms in Pueblo, Colorado, the largest legal outdoor cannabis farm in the world at 36 acres.