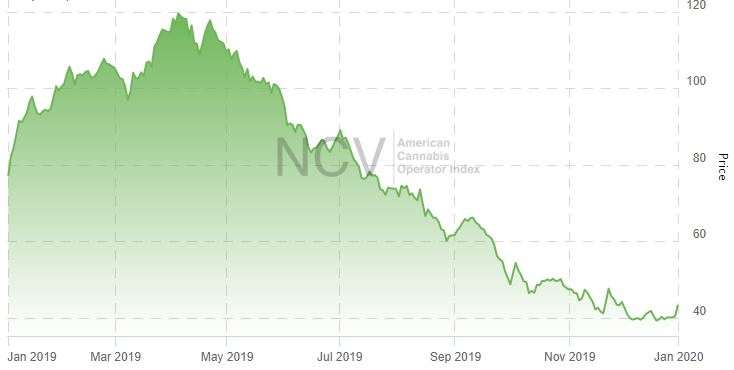 During December, the index included 23 companies, including 19 multi-state operators (MSOs) and 3 focused solely on CBD extracted from industrial hemp. Several MSOs are pursuing CBD strategies apart from their state-licensed cannabis businesses. 6 companies managed double-digit gains, while 9 posted double-digit losses, including 4 that lost more than 25% of their value: 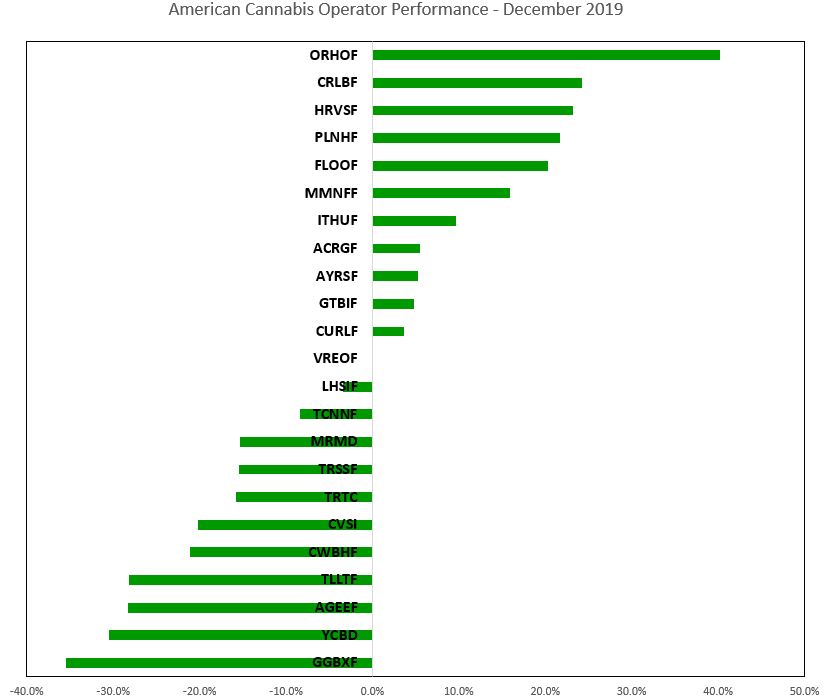 The four best performing stocks were Origin House (CSE: OH) (OTC: ORHOF), Cresco Labs (CSE: CL) (OTC: CRLBF), Harvest Health and Recreation (CSE: HARV) (OTC: HRVSF) and Planet 13 Holdings (CSE: PLTH) (OTC: PLNHF).  Origin House advanced on the strength of Cresco Labs ahead of its pending merger, with shareholders set to receive .7031 shares of Cresco Labs for each Origin House share. The discount to the price implied by the deal narrowed during the month from 16% to about 5% as it became clear that shareholders would approve the deal. Cresco Labs rallied back from extreme weakness late November and early in the month, when it posted a 2019 low, as traders gravitated toward the company ahead of Illinois legalizing. Harvest Health moved to the top of its three-month trading range after raising substantial debt capital during December. Planet 13 rallied for the second straight month and ended Q4 with a gain of almost 9%.

The four worst performing stocks were Green Growth Brands (CSE: GGB) (OTC: GGBXF), cbdMD (NYSE American: YCBD), Halo Labs (NEO: HALO) (OTC: AGEEF) and  TILT Holdings (CSE: TILT) (OTC: TLLTF). Green Growth Brands walked away from its pending deal with Moxie during the month. During Q4, it declined almost 39%. cbdMD fell after a weak Q4 financial report. Halo Labs retreated in December after a strong rally in November following the release of its Q3 financials. TILT Holdings gave up most of the big gains from the prior month, when it  had been the best performer after securing financing.

For January, the number of names in the index will will decline to 19. We are increasing the minimum price to US$0.25, which requires the removal of Halo Labs and Terra Tech (OTC:TRTC). Additionally, We are removing Origin House ahead of closing its merger in mid-January with Cresco Labs.  Finally, Tilt Holdings no longer qualifies, as its direct cannabis sales are less than 50% of overall company revenue.