During October, the index included 28 companies, including 23 multi-state operators (MSOs) and 5 focused solely on CBD extracted from industrial hemp. Several MSOs are pursuing CBD strategies apart from their state-licensed cannabis businesses. 6 companies managed double-digit gains, while 14 posted double-digit losses, including 4 that lost more than 25% of their value: 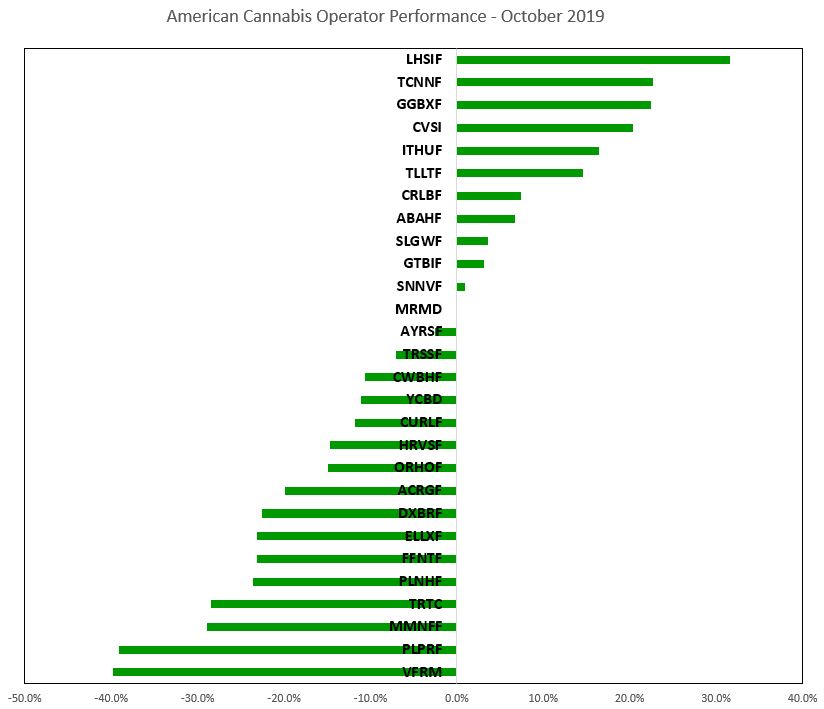 The three best performing stocks were Liberty Health Sciences (CSE: LHS) (OTC: LHSIF), Trulieve (CSE: TRUL) (OTC: TCNNF) and Green Growth Brands (CSE: GGB) (OTC: GGBXF). Liberty  bounced back sharply after reporting fiscal Q2 financials that showed 93% sequential revenue growth and improved profitability. Trulieve, which is up in 2019, was able to secure $60 million through the issuance of debt with warrants on terms similar to four months ago. Like Liberty, Green Growth Brands bounced back after issuing financials for the  year ending June 30th.

The three worst performing stocks were Veritas Farms (OTC:  VFRM), Plus Products (CSE: PLUS) OTC: PLPRF) and MedMen (CSE: MMEN) (OTC: MMNFF). Veritas Farms, which conducted a reverse-split in late September, pulled back after a strong advance in its stock over the past several months. MedMen rallied into the release of its financials for the year ending June 30th but sold off sharply following news that it was in the process of renegotiating its convertible note credit agreement with Gotham Green Partners.

In the next monthly review, we will summarize the performance for November and discuss any additions or deletions. Be sure to bookmark the page to stay current on American cannabis operators stock price movements within the day or from day-to-day.