The American Cannabis Operator Index fell again for the eighth consecutive month but managed to outperform the broader cannabis sector again, declining 6.9% to 44.22:

During November, the index included 23 companies, including 19 multi-state operators (MSOs) and 4 focused solely on CBD extracted from industrial hemp. Several MSOs are pursuing CBD strategies apart from their state-licensed cannabis businesses. 7 companies managed double-digit gains, while 11 posted double-digit losses, including 6 that lost more than 25% of their value: 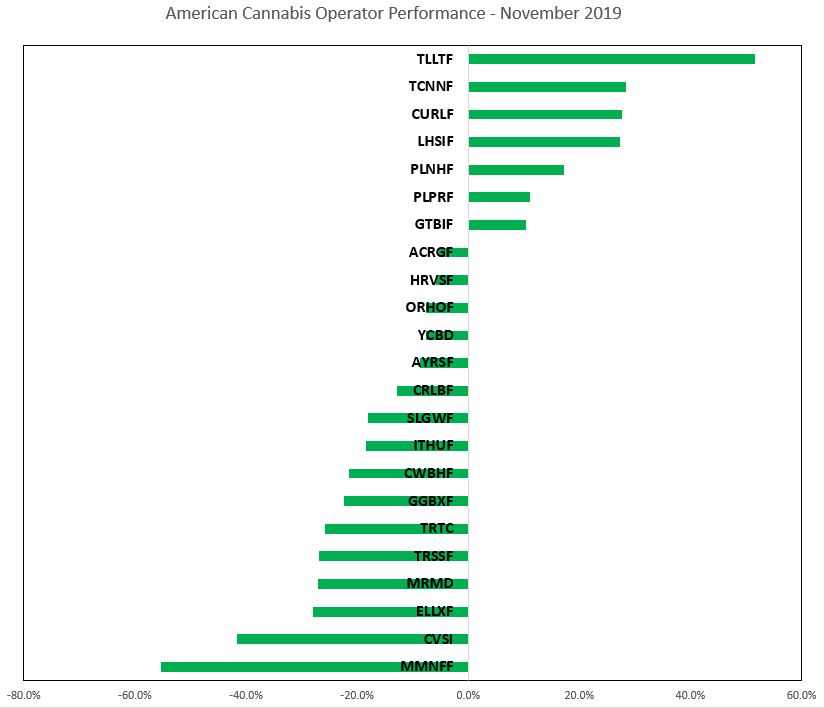 The four worst performing stocks were MedMen (CSE: MMEN) (OTC: MMNFF), CV Sciences (OTC: CVSI), Elixinol Global (ASX: ELLXF) (OTC: ELLXF) and MariMed (OTC: MRMD). MedMen plunged  mid-month after announcing layoffs and a plan to achieve profitability. Its fiscal Q1 showed sequential revenue growth of only 5% as losses declined only modestly. CV Sciences and Elixinol Global suffered from revenue declines in Q3 as well as the FDA statement regarding CBD safety late in the month. MariMed was late to file its financials but did so as the month ended, with revenue falling sharply from the prior quarter.

For December, the number of names in the index will remain at 23.  Elixinol Global, Plus Products (CSE: PLUS) OTC: PLPRF) and SLANG Worldwide (CSE: SLNG) (OTC: SLGWF) were removed due to not meeting the trading volume requirement, while Halo Labs (NEO: HALO) (OTC: AGEEF) and Vireo Health (CSE: VREO) (OTC: VREOF) return and Flower One (CSE: FONE) (OTC: FLOOF) joins for the first time.