The American Cannabis Operator Index extended its gains during October after a strong Q3 performance, jumping 13.7% to 40.94: 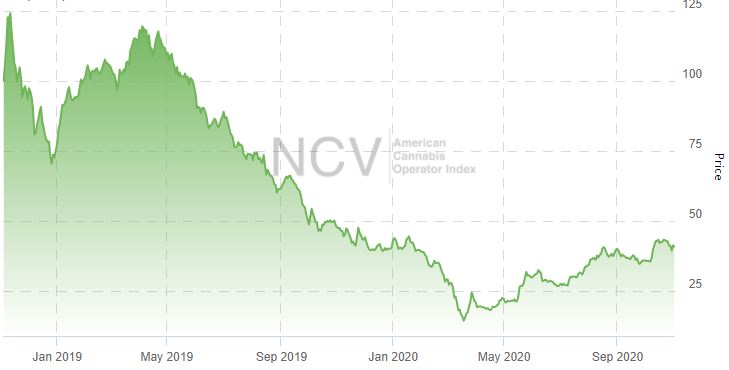 During October, the index included 16 companies, including 13 multi-state operators (MSOs) and 3 focused solely on CBD extracted from industrial hemp. Four companies posted gains in excess of 25%, while only three failed to post gains: 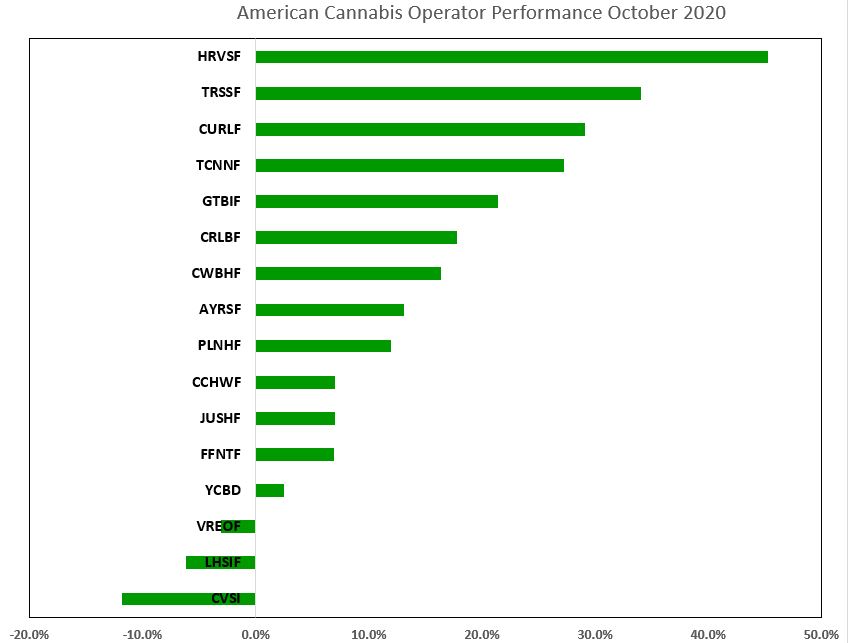 The four best performing stocks included Harvest Health and Recreation (CSE: HARV) (OTC: HRVSF), TerrAscend (CSE: TER) (OTC: TRSSF), Curaleaf (CSE: CURA) (OTC: CURLF) and Trulieve (CSE: TRUL) (OTC: TCNNF). Harvest rose sharply ahead of the vote for adult-use in Arizona and held most of its gains after selling C$46 million of stock with warrants. It opened its 7th and 8th dispensaries in Pennsylvania during the month. Despite the rally, it remains down 52% this year. TerrAscend, which has rallied 164% in 2020, was likely bid up ahead of the New Jersey adult-use vote. Curaleaf also likely attracted investor interest ahead of the upcoming elections given its position in Arizona and New Jersey (as well as adjacent markets of New York and Pennsylvania, which could legalize through the legislative process). The company continued to expand its brands and physical presence during the month and also itnroduced new products to the Florida market. Its stock is up 49% in 2020. Trulieve, which is up 99% this year, was one of the weakest performers in September. During October, it opened five additional dispensaries in Florida, giving it a total of 64.

The four worst performing stocks included CV Sciences (OTC: CVSI), Liberty Health Sciences (CSE: LHS) (OTC: LHSIF), Vireo Health (CSE: VREO) (OTC: VREOF) and cbdMD (NYSE American: YCBD). CV Sciences, one of the strongest names a month ago, refreshed its CBD packaging during the month. It has declined 52% this year. Liberty Health Sciences announced that it is offering to reprice and extend its convertible debt. Its CEO resigned and will be leaving the Board of Directors at year-end. The company’s Q2 sales fell 1% from Q1 despite a rapidly expanding Florida market and data that their sales volumes grew during the quarter. The stock has declined almost 28% this year. Vireo Health, which was the strongest stock among the group in September, continued to execute on its strategy of more narrowly focusing as it divested a non-core asset in Ohio. Vireo has declined 6% in 2020. cbdMD, which was also one of the weakest names in September, has outpaced its peers in 2020 despite the relative weakness in October, which left it down just 9% year-to-date.

For November, the number of names in the index will increase to 17 with the return of Acreage Holdings (CSE: ACRG.A) (OTC: ACRHF).

In the next monthly review, we will summarize the performance for November and discuss any additions or deletions. Be sure to bookmark the page to stay current on American cannabis operators stock price movements within the day or from day-to-day.