After soaring nearly 35% in May, the American Cannabis Operator Index pulled back in June, decreasing 9.8% to 27.25: 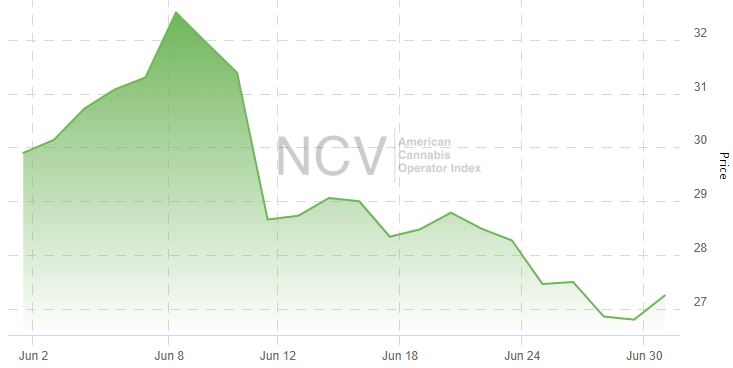 During June, the index included 18 companies, including 15 multi-state operators (MSOs) and 3 focused solely on CBD extracted from industrial hemp. Two companies posted double-digit percentage gains, while eight declined by more than 10% during the month: 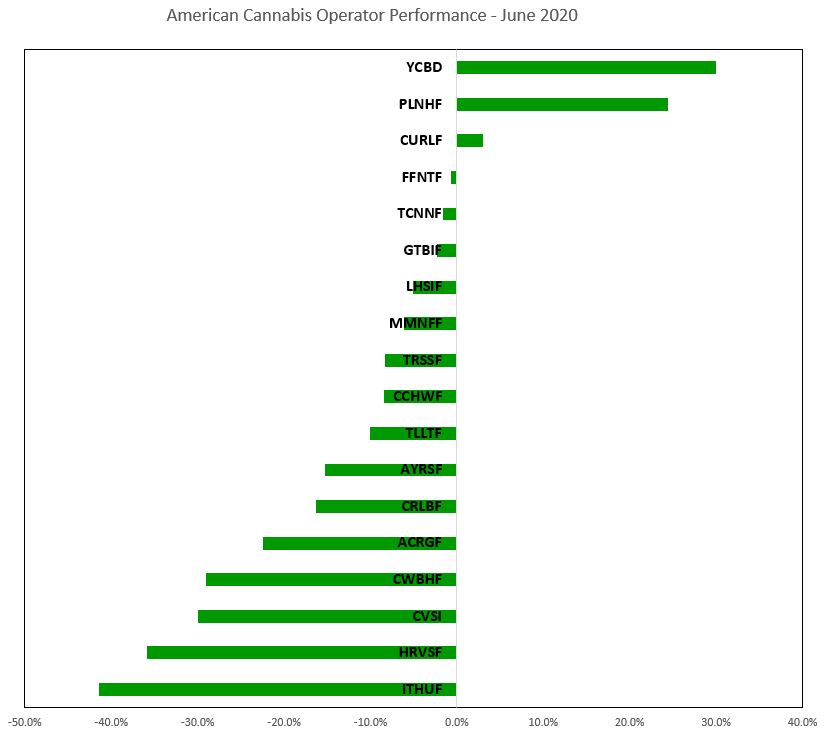 The four best performing stocks included cbdMD (NYSE American: YCBD), Planet 13 Holdings (CSE: PLTH) (OTC: PLNHF), Curaleaf Holdings (CSE: CURA) (OTC: CURLF) and 4Front (CSE: FFNT) (OTC: FFNTF). cbdMD was among the strongest performers for the second month in a row and is now down 16.8% year-to-date. The company had disclosed an acquisition bid during May, and during May its President left without explanation. Planet 13 reported Q1 financials in early June, reopened its superstore in Las Vegas and priced a $10 million equity offering. Curaleaf Holdings amended its pending acquisition of Grassroots Cannabis. 4Front reported its Q4 revenue, which grew sharply from the prior quarter.

The four worst performing stocks included iAnthus Capital (CSE: IAN) (OTC: ITHUF), Harvest Health and Recreation (CSE: HARV) (OTC: HRVSF), CV Sciences (OTC: CVSI), and Charlotte’s Web (TSX: CWEB)(OTC: CWBHF). iAnthus continued to face mounting pressure after defaulting on its debt. Harvest filed a prospectus to sell up to $300 million in securities, replaced its CFO and moved forward with an asset sale, with the company taking almost entirely stock in exchange for California cannabis dispensary licenses. CV Sciences saw its shareholders vote down a potential reverse-split that would could have enabled the company to uplist on a higher exchange. Charlotte’s Web closed its acquisition of Abacus Health Products and priced a C$77.6 million equity offering.

For July, the number of names in the index will will decrease to 16 with the removals of 4Front, which failed to meet the minimum volume requirement, and iAnthus Capital and MedMen (CSE: MMEN) (OTC: MMNFF), both of which fell below the minimum price, and the return of Vireo Health (CSE: VREO) (OTC: VREOF).